The first fluorescent sensor for known date rape drug gamma-butyrolactone (GBL) has been developed in Singapore. It emits orange fluorescence in alcoholic drinks containing GBL when irradiated with a green laser.

Gamma-butyrolactone (GBL) is a readily available industrial solvent that is often used as a date rape drug. There are several detection kits that can show if a drink has been spiked with drugs like gamma-hydroxybutyric acid (GHB) and ketamine but there are no commercially available sensors to detect GBL.

Fernando Patolsky and Michael Ioffe of Tel Aviv University developed a sensor that, when dipped into a drink, will instantly detect the presence of a drug such as GHB, ketamine, or Rohypnol. 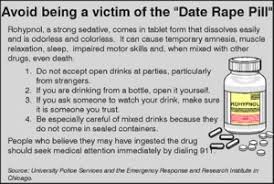 more info on other drug

Predatory drugs or date rape drugs are responsible for the creation of the most dangerous and pathologic environment that exists around drug use and drug abuse. Predatory drugs are a general class of drug that are primarily used to “render the victim incapable of resisting sexual advances”. (U.S. DEA)

This statement does not imply that the drug makes a person desire sexual activity, but quite the opposite. Predatory drugs leave the victim helpless, possibly unconscious, but certainly without any memory of a crime being committed against him/her. It can not be emphasized enough that giving someone a predatory drug is not only morally reprehensible it is also a serious criminal act. Illicit use of date rape drugs involve some of the most pathologic criminals who are involved with our justice system.

What is Date Rape Drug Addiction?

So called date rape drugs are also found at rave parties, clubs, college parties, and even in high school social environments. They are potent drugs that can cause serious health problems, developmental problems, overdose and death. To further complicate the effects of these drugs, many are produced in illegal labs. Illicit production of drugs means there is no quality control standards. The lack of quality control standards can greatly diminish the purity of the drugs and leaves the user vulnerable to harsh chemicals and possibly overdose. Most of the chemicals found in date rape drugs are not intended for human consumption.

The number of drugs that are considered predatory drugs is increasing. To date, the most commonly used are:

Some of these drugs are made from industrial strength floor cleansers, lye, and Dranno and can cause brain damage.

The regular use of drugs such as GHB/GBL used to lower inhibitions can create significant side effects. The most common side effects produced by the recreational use of date rape drugs are:

Because of the memory loss associated with these drugs, the user can be prone to use again and again without memory of severe side effects. Once used regularly, date rate drugs could also lead to serious withdrawal symptoms. These withdrawal symptoms will require medical attention and medication.

Beyond the physical dependence an emotional dependence can quickly develop. Once regular use begins an addict can experience personality changes which may result in aggressive behavior, a disregard for authority, a disregard for personal safety, risky sexual behavior, a loss of boundaries, financial difficulties, problems at school or work, a change in friends, and the loss of interest in normal activities.

No one plans on becoming an addict but the power of drugs on the brain’s functioning, accompanied by the alterations in the neuroreceptors, drives the addiction process. It is not about choice or desire once the body’s systems have been affected. Date rape drugs or predatory drugs are extraordinarily powerful both in their addictive qualities and the serious, negative, health consequences that accompany regular use.