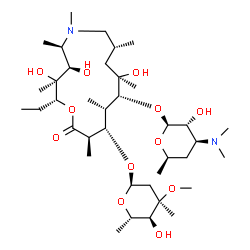 Common side effects include nausea, vomiting, diarrhea and upset stomach.[3] An allergic reaction, such as anaphylaxis, QT prolongation, or a type of diarrhea caused by Clostridium difficile is possible.[3] No harm has been found with its use during pregnancy.[3] Its safety during breastfeeding is not confirmed, but it is likely safe.[4] Azithromycin is an azalide, a type of macrolide antibiotic.[3] It works by decreasing the production of protein, thereby stopping bacterial growth.[3]

Azithromycin was discovered 1980 by Pliva, and approved for medical use in 1988.[5][6] It is on the World Health Organization’s List of Essential Medicines, the safest and most effective medicines needed in a health system.[7] The World Health Organization classifies it as critically important for human medicine.[8] It is available as a generic medication[9] and is sold under many trade names worldwide.[2] The wholesale cost in the developing world is about US$0.18 to US$2.98 per dose.[10] In the United States, it is about US$4 for a course of treatment as of 2018.[11] In 2016, it was the 49th most prescribed medication in the United States with more than 15 million prescriptions.[12]

Azithromycin is used to treat many different infections, including:

A strain of gonorrhea reported to be highly resistant to azithromycin was found in the population in 2015. Neisseria gonorrhoeae is normally susceptible to azithromycin,[21] but the drug is not widely used as monotherapy due to a low barrier to resistance development.[15] Extensive use of azithromycin has resulted in growing Streptococcus pneumoniae resistance.[22]

No harm has been found with use during pregnancy.[3] However, there are no adequate well-controlled studies in pregnant women.[23]

Azithromycin appears to be effective in the treatment of COPD through its suppression of inflammatory processes.[24] And potentially useful in asthma and sinusitis via this mechanism.[25] Azithromycin is believed to produce its effects through suppressing certain immune responses that may contribute to inflammation of the airways.[26][27]

Most common adverse effects are diarrhea (5%), nausea (3%), abdominal pain (3%), and vomiting. Fewer than 1% of people stop taking the drug due to side effects. Nervousness, skin reactions, and anaphylaxis have been reported.[28] Clostridium difficile infection has been reported with use of azithromycin.[3] Azithromycin does not affect the efficacy of birth control unlike some other antibiotics such as rifampin. Hearing loss has been reported.[29]

In 2013 the FDA issued a warning that azithromycin “can cause abnormal changes in the electrical activity of the heart that may lead to a potentially fatal irregular heart rhythm.” The FDA noted in the warning a 2012 study that found the drug may increase the risk of death, especially in those with heart problems, compared with those on other antibiotics such as amoxicillin or no antibiotic. The warning indicated people with preexisting conditions are at particular risk, such as those with QT interval prolongation, low blood levels of potassium or magnesium, a slower than normal heart rate, or those who use certain drugs to treat abnormal heart rhythms.[32][33][34]

Azithromycin prevents bacteria from growing by interfering with their protein synthesis. It binds to the 50S subunit of the bacterial ribosome, thus inhibiting translation of mRNA. Nucleic acid synthesis is not affected.[23]

Azithromycin is an acid-stable antibiotic, so it can be taken orally with no need of protection from gastric acids. It is readily absorbed, but absorption is greater on an empty stomach. Time to peak concentration (Tmax) in adults is 2.1 to 3.2 hours for oral dosage forms. Due to its high concentration in phagocytes, azithromycin is actively transported to the site of infection. During active phagocytosis, large concentrations are released. The concentration of azithromycin in the tissues can be over 50 times higher than in plasma due to ion trapping and its high lipid solubility.[citation needed] Azithromycin’s half-life allows a large single dose to be administered and yet maintain bacteriostatic levels in the infected tissue for several days.[35]

Following a single dose of 500 mg, the apparent terminal elimination half-life of azithromycin is 68 hours.[35] Biliary excretion of azithromycin, predominantly unchanged, is a major route of elimination. Over the course of a week, about 6% of the administered dose appears as unchanged drug in urine.

A team of researchers at the pharmaceutical company Pliva in Zagreb, SR Croatia, Yugoslavia, — Gabrijela Kobrehel, Gorjana Radobolja-Lazarevski, and Zrinka Tamburašev, led by Dr. Slobodan Đokić — discovered azithromycin in 1980.[6] It was patented in 1981. In 1986, Pliva and Pfizer signed a licensing agreement, which gave Pfizer exclusive rights for the sale of azithromycin in Western Europe and the United States. Pliva put its azithromycin on the market in Central and Eastern Europe under the brand name Sumamed in 1988. Pfizer launched azithromycin under Pliva’s license in other markets under the brand name Zithromax in 1991.[36] Patent protection ended in 2005.[37]

In 2010, azithromycin was the most prescribed antibiotic for outpatients in the US,[38] whereas in Sweden, where outpatient antibiotic use is a third as prevalent, macrolides are only on 3% of prescriptions.[39]

“This new drug provides another option for the treatment of patients with community-acquired bacterial pneumonia, a serious disease,” said Ed Cox, M.D., M.P.H., director of FDA’s Office of Antimicrobial Products. “For managing this serious disease, it is important for physicians and patients to have treatment options. This approval reinforces our ongoing commitment to address treatment of infectious diseases by facilitating the development of new antibiotics.”

Community-acquired pneumonia occurs when someone develops pneumonia in the community (not in a hospital). Pneumonia is a type of lung infection that can range in severity from mild to severe illness and can affect people of all ages. According to data from the Centers from Disease Control and Prevention, each year in the United States, about one million people are hospitalized with community-acquired pneumonia and 50,000 people die from the disease.

The safety and efficacy of Xenleta, taken either orally or intravenously, was evaluated in two clinical trials with a total of 1,289 patients with CABP. In these trials, treatment with Xenleta was compared to another antibiotic, moxifloxacin with or without linezolid. The trials showed that patients treated with Xenleta had similar rates of clinical success as those treated with moxifloxacin with or without linezolid.

The most common adverse reactions reported in patients taking Xenleta included diarrhea, nausea, reactions at the injection site, elevated liver enzymes and vomiting. Xenleta has the potential to cause a change on an ECG reading (prolonged QT interval). Patients with prolonged QT interval, patients with certain irregular heart rhythms (arrhythmias), patients receiving treatment for certain irregular heart rhythms (antiarrhythmic agents), and patients receiving other drugs that prolong the QT interval should avoid Xenleta. In addition, Xenleta should not be used in patients with known hypersensitivity to lefamulin or any other members of the pleuromutilin antibiotic class, or any of the components of Xenleta. Based on findings of fetal harm in animal studies, pregnant women and women who could become pregnant should be advised of the potential risks of Xenleta to a fetus. Women who could become pregnant should be advised to use effective contraception during treatment with Xenleta and for two days after the final dose.

Xenleta received FDA’s Qualified Infectious Disease Product (QIDP) designation. The QIDP designation is given to antibacterial and antifungal drug products intended to treat serious or life-threatening infections under the Generating Antibiotic Incentives Now (GAIN) title of the FDA Safety and Innovation Act. As part of QIDP designation, Xenleta was granted Priority Review under which the FDA’s goal is to take action on an application within an expedited time frame.

The FDA granted the approval of Xenleta to Nabriva Therapeutics.

A key global challenge the FDA faces as a public health agency is addressing the threat of antimicrobial-resistant infections. Among the FDA’s other efforts to address antimicrobial resistance, is the focus on facilitating the development of safe and effective new treatments to give patients more options to fight serious infections.