Krill are shrimp-like crustaceans that are approximately 1 to 6 centimeters long. They live is the ocean, where they feed mainly on phytoplankton. They’re near the bottom of the food chain and are eaten by whales, seals, penguins, squid and fish.

Commercial fishing of krill occurs primarily in the Southern Ocean and the northern Pacific Ocean along the coasts of Canada and Japan. Krill that are caught are used for aquaculture and aquarium feeds, sport fishing bait or they are eaten as food. In Japan, krill that’s caught for food is called okiami. 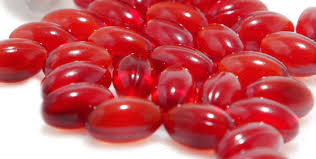 Krill oil, the oil that’s found naturally in krill, is extracted and sold as a nutritional supplement. It’s sold in some health food stores and online in capsule form.

Another reason krill oil is becoming popular is because it contains an antioxidant called astaxanthin. The algae that krill eat produces the bright red pigment astaxanthin that gives krill and other crustaceans such as lobster and shrimp their reddish-pink color.

Antioxidants protect our body cells from damage from free radicals, unstable substances that are thought to contribute to certain chronic diseases. Unlike many other antioxidants, astaxanthin crosses the blood-brain barrier, where it could theoretically protect the eye, brain and central nervous system from free radical damage.

The recent popularity of krill oil supplements has raised concerns that it could threaten the population of its predators, including penguins, seals and whales. people use krill oil for the same reasons they use fish oil, flax oil or other omega-3 fatty acids. Unlike fish oil, krill oil doesn’t cause fishy burps or an aftertaste, a common side effect of fish oil. Also, krill oil contains higher amounts of astaxanthin than fish oil. Here are some specific conditions for which it’s used.

A study in the Journal of the American College of Nutrition examined krill oil (300 mg daily) compared to a placebo and found that krill oil was effective at reducing arthritis symptoms and inflammation.

Side effects of krill oil may include loose stools, diarrhea or indigestion.

Krill oil should also be used with caution by people taking herbs and supplements that are thought to increase the risk of bleeding, such as ginkgo biloba and garlic.

Deutsch L. Evaluation of the effect of Neptune Krill Oil on chronic inflammation and arthritic symptoms. J Am Coll Nutr. (2007) 26.1: 39-48.

Krill oil is a nutrient from a tiny crustacean (similar to a shrimp) that lives in the icy waters around the Antarctic. It is a rich source of the omega-3 essential fatty acids eicosapentaenoic acid (EPA) and docosahexaenoic acid (DHA).

The main selling points for krill oil are that its omega-3s are packaged differently from fish oils, in the form of a phospholipid that is easier for the body to absorb. This better absorption rate – up to 60 per cent, according to some manufacturers – means less capsules need to be taken to achieve the desired health benefits.

It is also said to have the added bonus of containing another essential nutrient, choline, as well as an antioxidant, astaxanthin. Astaxanthin is found in sea algae and it’s what gives shrimp, lobster, salmon, krill and other sea-life that feed on algae their rosy color.

Krill oil supplements are also more expensive than fish oils because of the extensive processes undertaken to ensure quality and eco-sustainability. However, many argue that it is better value for money, as you have to take less capsules than if you were taking fish oil.