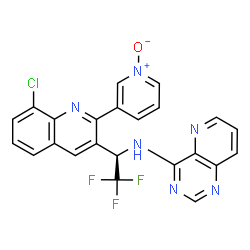 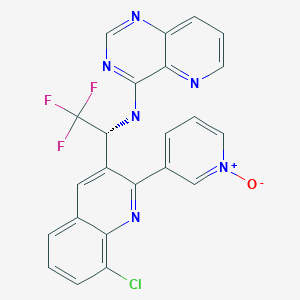 Seletalisib has been used in trials studying the treatment and basic science of Primary Sjogren’s Syndrome.

The present invention relates to the new therapeutic use of a known chemical compound. More particularly, the present invention concerns the use of a specific substituted quinoline derivative comprising a fluorinated ethyl side-chain in the treatment of activated phosphoinositide 3 -kinase delta syndrome (APDS).

N- {(R)- 1 -[8-Chloro-2-(l -oxypyridin-3-yl)quinolin-3-yl]-2,2,2-trifiuoroethyl} -pyrido[3,2-JJpyrimidin-4-ylamine is specifically disclosed in WO 2012/032334. The compounds described in that publication are stated to be of benefit as pharmaceutical agents, especially in the treatment of adverse inflammatory, autoimmune, cardiovascular, neurodegenerative, metabolic, oncological, nociceptive and ophthalmic conditions.

There is no specific disclosure or suggestion in WO 2012/032334, however, that the compounds described therein might be beneficial in the treatment of APDS.

APDS patients generally have reduced numbers of white blood cells (lymphopenia), especially B cells and T cells, compromising their propensity to recognise and attack invading microorganisms, such as viruses and bacteria, and thereby prevent infection. Individuals affected with APDS develop recurrent infections, particularly in the lungs, sinuses and ears. Recurrent respiratory tract infections may gradually lead to bronchiectasis, a condition which damages the passages leading from the windpipe to the lungs (bronchi) and can cause breathing problems. APDS patients may also suffer from chronic active viral infections, including Epstein-Barr virus infections and cytomegalovirus infections.

APDS has also been associated with abnormal clumping of white blood cells, which can lead to enlarged lymph nodes (lymphadenopathy). Alternatively, the white blood cells can build up to form solid masses (nodular lymphoid hyperplasia), usually in the moist lining of the airways or intestines. Whilst lymphadenopathy and nodular lymphoid hyperplasia are benign (noncancerous), APDS also increases the risk of developing a form of cancer called B cell lymphoma.

APDS is a disorder of childhood, typically arising soon after birth. However, the precise prevalence of APDS is currently unknown.

Phosphoinositide 3-kinase delta (ΡΒΚδ) is a lipid kinase which catalyses the generation of phosphatidylinositol 3,4,5-trisphosphate (PIP3) from phosphatidylinositol 4,5-bisphosphate (PIP2). PI3K5 activates signalling pathways within cells, and is specifically found in white blood cells, including B cells and T cells. PI3K5 signalling is involved in the growth and division (proliferation) of white blood cells, and it helps direct B cells and T cells to mature (differentiate) into different types, each of which has a distinct function in the immune system.

APDS is known to occur in two variants, categorised as APDSl and APDS2.

It has now been found that N-{(R)-l-[8-chloro-2-(l-oxypyridin-3-yl)quinolin-3-yl]- 2,2,2-trifluoroethyl}pyrido[3,2-(i]pyrimidin-4-ylamine is capable of inhibiting the elevation of PI3K signalling in T cells (lymphocytes) from both APDSl and APDS2 patients in the presence or absence of T cell receptor activation.

The present invention accordingly provides N-{(R)-l-[8-chloro-2-(l-oxypyridin-3-yl)quinolinB-yl]-2,2,2-trifluoroethyl}pyrido[3,2-JJpyrimidin-4-ylamine of formula (A):

or a pharmaceutically acceptable salt thereof, for use in the treatment and/or prevention of APDS.