Daclizumab is a humanized monoclonal antibody indicated in the United States for prophylaxis of acute organ rejection in patients receiving renal transplants.

It was marketed as Zenepax, but discontinued by Roche in 2009 due to diminishing market demand for that indication. Biogen Idec is currently conducting phase III trials for daclizumab in MS. A phase III trial started in March 2010 is being conducted to determine efficacy of preventing MS relapse.

Study dosing of daclizumab is 150 mg subcutaneously once every 4 weeks versus interferon beta-1a (Avonex) 30 mg intramuscularly given once weekly for 96 to 144 weeks.

Daclizumab (Zenapax®) (molecular wt = 144 kd.) is a humanized monoclonal antibody (IgG1) produced by recombinant DNA technology. It gained FDA approval in Dec 1997. It is known by several other names including HAT (Humanized Anti-Tac), SMART anti-Tac, anti-CD25, and humanized anti-IL2-receptor. It was developed and patented by Protein Design Laboratories (Mountain View, CA) and it is marketed by Hoffman LaRoche (Nutley, NJ ).

Daclizumab is a composite of human (90%) and murine (10%) antibody sequences. In the model below, the murine portions are shown in red and dark blue; the rest of the molecule (gray color) represents the human sequence

The study is aiming for enrollment of 1500 patients and is expected to be complete in January 2014. 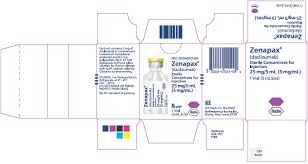 Daclizumab (trade name Zenapax) is a therapeutic humanized monoclonal antibody. It is used to prevent rejection in organ transplantation, especially in kidney transplants. The drug is also under investigation for the treatment of multiple sclerosis.

Daclizumab works by binding to CD25, the alpha subunit of the IL-2 receptor of T cells. The drug is marketed in the US, but not in Europe.

Daclizumab is given in multiple doses, the first 1 hour before the transplant operation and 5 further doses given at two week intervals after the transplant. These saturate the receptors and prevent T cell activation and thus prevent formation of antibodiesagainst the transplant.

Like the similar drug basiliximab, daclizumab reduces the incidence and severity of acute rejection in kidney transplantation without increasing the incidence of opportunistic infections.

In the United Kingdom, the National Institute for Health and Clinical Excellence (NICE) has recommended its use be considered for all kidney transplant recipients.[citation needed]

In 2006 it began a Phase II clinical trial that finished in 2007 as a possible multiple sclerosis (MS) treatment. Participants were nine patients with multiple sclerosis not controlled with interferon. Daclizumab was effective in reducing lesions and improving clinical scores.[1] As of June 2013, the drug is in Phase III trials for this indication.[2]

Daclizumab has also been used to slow the progression of autoimmune diseases, particularly that of birdshot chorioretinopathy.[3]

Common side effects with a frequency of at least 10% include sleeplessness, tremor, headache, arterial hypertension, dyspnoea, gastrointestinal side effects and oedema. In rare cases, the drug can cause severe anaphylaxis.[4]

Daclizumab must not be administered to lactating women.[4]

Daclizumab was developed by PDL Biopharma, building on research at the National Institutes of Health (NIH).[5] Since December 1997, it is marketed by Hoffmann-La Roche in the US.