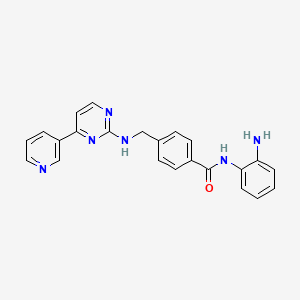 One clinical trial (for refractory follicular lymphoma) was temporarily put on hold due to cardiac problems but resumed recruiting in 2009.[4]

In 2010 favourable results were announced from the phase II trial for Hodgkin’s lymphoma.[5]

MGCD0103 has also been used as a research reagent where blockage of members of the HDAC-family of histone deacetylases is required.[6]

Mocetinostat is an orally-bioavailable, spectrum-selective HDAC inhibitor. Mocetinostat is enrolling patients in a Phase 2 dose confirmation study in combination with Vidaza as treatment for intermediate and high-risk MDS. Mirati also plans to initiate Phase 2 studies of mocetinostat as a single agent in patients with mutations in histone acetyl transferases in bladder cancer and DLBCL. Initial data from the Phase 2 studies is expected by the end of 2014. In addition to the ongoing Phase 2 clinical trials, mocetinostat has completed 13 clinical trials in more than 400 patients with a variety of hematologic malignancies and solid tumors.

Mirati Therapeutics is a targeted oncology company developing an advanced pipeline of breakthrough medicines for precisely defined patient populations. Mirati’s approach combines the three most important factors in oncology drug development – drug candidates with complementary and compelling targets, creative and agile clinical development, and a highly accomplished precision medicine leadership team. The Mirati team is using a proven blueprint for developing targeted oncology medicines to advance and maximize the value of its pipeline of drug candidates, including MGCD265 and MGCD516, which are orally bioavailable, multi-targeted kinase inhibitors with distinct target profiles, and mocetinostat, an orally bioavailable, spectrum-selective histone deacetylase inhibitor. More information is available at www.mirati.com.

In eukaryotic cells, nuclear DNA associates with histones to form a compact complex called chromatin. The histones constitute a family of basic proteins which are generally highly conserved across eukaryotic species. The core histones, termed H2A, H2B, H3, and H4, associate to form a protein core. DNA winds around this protein core, with the basic amino acids of the histones interacting with the negatively charged phosphate groups of the DNA. Approximately 146 base pairs of DNA wrap around a histone core to make up a nucleosome particle, the repeating structural motif of chromatin.

Csordas, Biochem. J., 286: 23-38 (1990) teaches that histones are subject to posttranslational acetylation of the α,ε-amino groups of N-terminal lysine residues, a reaction that is catalyzed by histone acetyl transferase (HAT1). Acetylation neutralizes the positive charge of the lysine side chain, and is thought to impact chromatin structure. Indeed, Taunton et al., Science, 272: 408-411 (1996), teaches that access of transcription factors to chromatin templates is enhanced by histone hyperacetylation. Taunton et al. further teaches that an enrichment in underacetylated histone H4 has been found in transcriptionally silent regions of the genome.

The molecular cloning of gene sequences encoding proteins with HDAC activity has established the existence of a set of discrete HDAC enzyme isoforms. Some isoforms have been shown to possess specific functions, for example, it has been shown that HDAC-6 is involved in modulation of microtubule activity. However, the role of the other individual HDAC enzymes has remained unclear.

These findings suggest that inhibition of HDAC activity represents a novel approach for intervening in cell cycle regulation and that HDAC inhibitors have great therapeutic potential in the treatment of cell proliferative diseases or conditions. To date, few inhibitors of histone deacetylase are known in the art.

The mixture of 4-Aminomethyl-benzoic acid methyl ester HCl (15.7 g, 77.8 mmol) in DMF (85.6 mL) and DIPEA (29.5 mL, 171.2 mmol) was stirred at rt for 10 min. Pyrazole-1-carboxamidine HCl (12.55 g, 85.6 mmol) was added to the reaction mixture and then stirred at rt for 4 h to give clear solution. The reaction mixture was evaporated to dryness under vacuum. Saturated NaHCO3 solution (35 mL) was added to give nice suspension. The suspension was filtered and the filter cake was washed with cold water. The mother liquid was evaporated to dryness and then filtered. The two solids were combined and re-suspended over distilled H2O (50 ml). The filter cake was then washed with minimum quantities of cold H2O and ether to give 12.32 g white crystalline solid intermediate 1 (77% yield, M+1: 208 on MS).