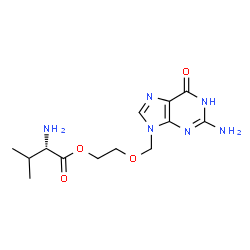 Valaciclovir, also spelled valacyclovir, is an antiviral medication used to treat outbreaks of herpes simplex or herpes zoster(shingles).[1] It is also used to prevent cytomegalovirus following a kidney transplant in high risk cases.[1] It is taken by mouth.[1]

Common side effects include headache and vomiting.[1] Severe side effects may include kidney problems.[1] Use in pregnancy appears to be safe.[1] It is a prodrug, which works after being converted to aciclovir in a person’s body.[1]

Valaciclovir was patented in 1987 and came into medical use in 1995.[2][3] It is available as a generic medication.[4] A month supply in the United Kingdom costs the NHS about £3 as of 2019.[4] In the United States the wholesale cost of this amount is about US$2.80.[5]In 2016 it was the 168th most prescribed medication in the United States with more than 3 million prescriptions.[6]

Valaciclovir is used for the treatment of HSV and VZV infections, including:[7]

It has shown promise as a treatment for infectious mononucleosis[11][12][13] and is preventively administered in suspected cases of herpes B virus exposure.[14]

Valaciclovir is not recommended in Bell’s palsy due to lack of benefit.[15]

Valaciclovir belongs to a family of molecules. Valaciclovir is a prodrug, an esterified version of aciclovir that has greater oral bioavailability (about 55%) than aciclovir.[10] It is converted by esterases to the active drug, aciclovir, and the amino acid, valine, via hepatic first-pass metabolism. Aciclovir is selectively converted into a monophosphate form by viral thymidine kinase, which is more effective (3000 times) in phosphorylation of aciclovir than cellular thymidine kinase. Subsequently, the monophosphate form is further phosphorylated into a disphosphate by cellular guanylate kinase and then into the active triphosphate form, aciclo-GTP, by cellular kinases.[10]

Aciclo-GTP, the active triphosphate metabolite of aciclovir, is a very potent inhibitor of viral DNA replication. Aciclo-GTP competitively inhibits and inactivates the viral DNA polymerase.[10] Its monophosphate form also incorporates into the viral DNA, resulting in chain termination. It has also been shown that the viral enzymes cannot remove aciclo-GMP from the chain, which results in inhibition of further activity of DNA polymerase. Aciclo-GTP is fairly rapidly metabolized within the cell, possibly by cellular phosphatases.[16]

Aciclovir is active against most species in the herpesvirus family. In descending order of activity:[17]

The drug is predominantly active against HSV and, to a lesser extent, VZV. It is only of limited efficacy against EBV and CMV. However, valacyclovir has recently been shown to lower or eliminate the presence of the Epstein–Barr virus in subjects afflicted with acute mononucleosis, leading to a significant decrease in the severity of symptoms.[11][12][13] Although it can prevent the establishment of viral latency, acyclovir therapy has not proven effective at eradicating latent viruses in nerve ganglia.[17]

It also is used for herpes B virus postexposure prophylaxis.[14]

It is marketed by GlaxoSmithKline under the trade names Valtrex and Zelitrex. Valaciclovir has been available as a generic drug in the U.S. since November 25, 2009.[19]

In an alternative procedure, condensation of L-valine (IV) with methyl acetoacetate (V) in the presence of NaOH produced the enamine-protected valine sodium salt (VI). Condensation of (VI) with the tosylate (VII), (prepared from acyclovir (I) and tosyl chloride) afforded ester (VIII). Then, acidic hydrolysis of the enaminoester moiety of (VIII) furnished the target valine ester. Similar procedures were also reported using omega-mesyl and omega-chloro acyclovir.

The esterification of acyclovir (I) with N-(tert-butoxycarbonyl)-L-valine (II) by means of EDC, TEA and DMAP in DMF gives the corresponding ester (III) which is finally deprotected by means of HCl in water to afford the target valacyclovir.