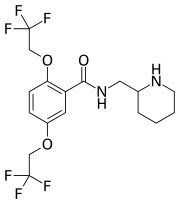 Flecainide is a medication used to prevent and treat abnormally fast heart rates.[1] This includes ventricular and supraventricular tachycardias.[1] Its use is only recommended in those with dangerous arrhythmias or when significant symptoms cannot be managed with other treatments.[1] Its use does not decrease a person’s risk of death.[1] It is taken by mouth or injection into a vein.[1][2]

Common side effects include dizziness, problems seeing, shortness of breath, chest pain, and tiredness.[1] Serious side effects may include cardiac arrest, arrhythmias, and heart failure.[1] It may be used in pregnancy, but has not been well studied in this population.[2][3] Use is not recommended in those with structural heart disease or ischemic heart disease.[1] Flecainide is a class Ic antiarrhythmic agent.[1] It works by decreasing the entry of sodium in heart cells, causing prolongation of the cardiac action potential.[1]

Flecainide is used in the treatment of many types of supraventricular tachycardias, including AV nodal re-entrant tachycardia (AVNRT) and Wolff-Parkinson-White syndrome (WPW).

In individuals suspected of having the Brugada syndrome, the administration of flecainide may help reveal the ECG findings that are characteristic of the disease process. This may help make the diagnosis of the disease in equivocal cases.[10]

Flecainide has been introduced into the treatment of arrhythmias in children.

In the long-term, flecainide seems to be safe in people with a healthy heart with no signs of left ventricular hypertrophy, ischemic heart disease, or heart failure.[11]

Results of a medical study known as the Cardiac Arrhythmia Suppression Trial (CAST) demonstrated that patients with structural heart disease (such as a history of MI (heart attack), or left ventricular dysfunction) and also patients with ventricular arrhythmias, should not take this drug. The results were so significant that the trial was stopped early and preliminary results were published.[12]

Because of the negative inotropic effects of flecainide, it should be used with caution in individuals with depressed ejection fraction, and may worsen congestive heart failure in these individuals. It should be avoided in people with ischaemic heart disease and the elderly.[15]

As with all class I antiarrhythmic agents, Flecainide increases the capture thresholds of pacemakers.[16]

Due to the narrow therapeutic index of flecainide, physicians should be alert for signs of toxicity before life-threatening arrhythmias occur like torsades de pointes. While the toxic effects of flecainide are closely related to the plasma levels of the drug,[17] it is unfeasible to check the plasma concentration in an individual on a regular basis.

Signs of flecainide toxicity include marked prolongation of the PR interval and widening of the QRS duration on the surface ECG. There may be signs and symptoms attributable to overt heart failure secondary to sudden decreased myocardial contractility.

Treatment of flecainide cardiac toxicity involves increasing the excretion of flecainide, blocking its effects in the heart, and (rarely) institution of cardiovascular support to avoid impending lethal arrhythmias. Modalities that have had success include administration of a beta-sympathomimetic agent,[17] and administration of a sodium load[17](often in the form of hypertonic sodium bicarbonate). Placing the individual on cardiopulmonary bypass support may be necessary in order to temporarily remove the need for a beating heart and to increase blood flow to the liver.[18][19]

Flecainide has high bioavailability after an oral dose,[26] meaning that most of the drug that is ingested will enter the systemic blood stream. Peak serum concentrations can be seen 1 to 6 hours after ingestion of an oral dose. While the plasma half-life is about 20 hours, it is quite variable, and can range from 12 to 27 hours.[27] During oral loading with flecainide, a steady state equilibrium is typically achieved in 3 to 5 days.

Because of the dual elimination routes of flecainide and its tendency to decrease myocardial contractility,[15] flecainide interacts with numerous pharmaceuticals and can potentiate the effects of other myocardial depressants and AV node blocking agents. In addition, flecainide can decrease the metabolism or elimination of many (but not all) agents that use the cytochrome P450 enzyme system.

Flecainide intoxication is rare but serious due to the cardiogenic shock that it provokes. Its diagnosis can be difficult in the lack of contributing anamnestic elements. Clinical and paraclinical signs are not specific. Treatment is primarily symptomatic, which gives good results thanks to the hypertonic solution of sodium salts. Organ donation is possible in the case of braindead patients who suffered a flecainide intoxication.[29]

Flecainide works by blocking the Nav1.5 sodium channel in the heart, slowing the upstroke of the cardiac action potential.[30] This thereby slows conduction of the electrical impulse within the heart, i.e. it “reduces excitability”. The greatest effect is on the His-Purkinje system and ventricular myocardium. The effect of flecainide on the ventricular myocardium causes decreased contractility of the muscle, which leads to a decrease in the ejection fraction.

The effect of flecainide on the sodium channels of the heart increases as the heart rate increases; This is known as use-dependence and is why that flecainide is useful to break a tachyarrhythmia.[31]

Flecainide also inhibits ryanodine receptor 2 (RyR2),[32] a major regulator of sarcoplasmic release of stored calcium ions. It can reduce calcium sparks and thus arrhythmogenic calcium waves in the heart.[33] While Flecainide therapy has been shown to suppress ventricular arrhythmias in patients with catecholaminergic polymorphic ventricular tachycardia(CPVT) and mouse models of this disease, the relative contribution from the inhibition of sodium channels and of RyR2 in this effect on CPVT is unclear.[34] 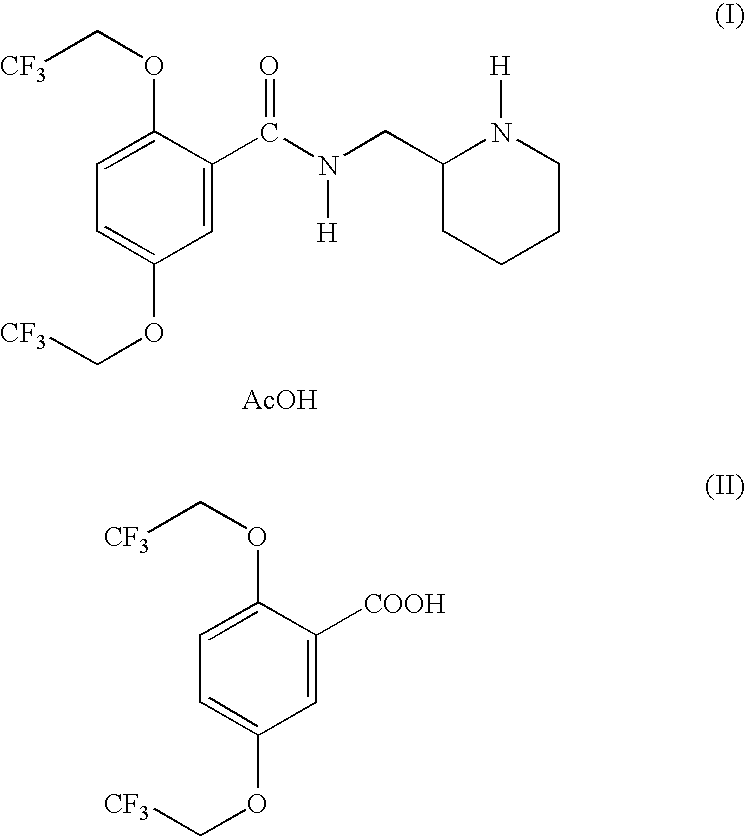 The method disclosed in British patent No. GB 2045760 for the preparation of the Flecainide base starts from 2,5-bis(2,2,2-trifluoroethoxy)benzoic acid which is converted to its acid chloride and reacts either with 2-(aminomethyl)piperidine to form Flecainide in one step or with 2-(aminomethyl)pyridine, followed by catalytic hydrogenation of the pyridine ring, to form Flecainide base in two steps. The disadvantage of the one step process is that the acid chloride reacts non-selectively with both nitrogen atoms of the 2-(aminomethyl)piperidine, resulting in a mixture of the two acylated isomers. 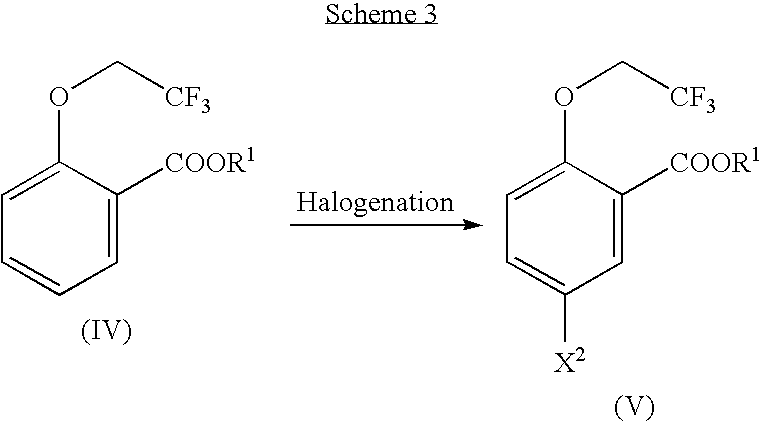 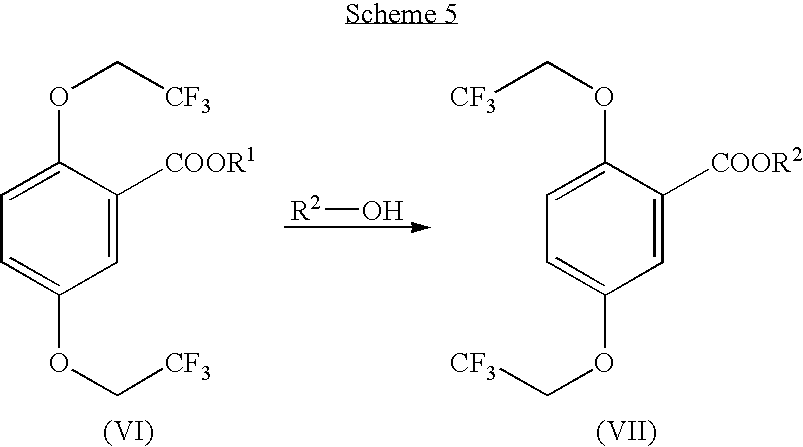 A mixture of methyl 2,5-bis(2,2,2-trifluoroethoxy)benzoate (1.5 g), 2-(aminomethyl)piperidine (0.62 g) in toluene (3 ml) was stirred at reflux for 10 hours. After cooling to room temperature, water (10 ml) was added and two layers solution were separated. The aqueous layer was extracted with toluene (2×10 ml) and the combined organic layers were washed with water (3×10 ml). The organic layer was concentrated under reduced pressure to give Flecainide free base as a white solid (1.63 g, 85%).

To a solution of Flecainide free base (1.5 g) in isopropanol (7.5 ml) was added glacial acetic acid (0.3 g) and the solution was stirred under reflux for 2 hours. The solution was cooled to room temperature and hexane (15 ml) was added and solids began to precipitate. The resulting suspension was stirred at 20–25° C. for 2 hours and the solids were filtered and then rinsed with hexane (2×10 ml). The damp cake was dried in vacuum for 4 hours to give Flecainide acetate as a white solid (1.54 g, Yield 89%).