Mifamurtide (trade name Mepact, marketed by Takeda) is a drug against osteosarcoma, a kind of bone cancer mainly affecting children and young adults, which is lethal in about a third of cases. The drug was approved in Europe in March 2009. The drug was invented by Ciba-Geigy (now Novartis) in the early 1980s and sold to Jenner Biotherapies in the 1990s. In 2003,IDM Pharma bought the rights and developed it further.[1] IDM Pharma was acquired by Takeda along with mifamurtide in June 2009.[2]

Mifamurtide had already been granted orphan drug status by the U.S. Food and Drug Administration (FDA) in 2001, and theEuropean Medicines Agency (EMA) followed in 2004. It was approved in the 27 European Union member states plus Iceland, Liechtenstein, and Norway by a centralized marketing authorization in March 2009. The drug was denied approval by the FDA in 2007.[3][4] Mifamurtide has been licensed by the EMA since March, 2009.[5]

Mifamurtide is indicated for the treatment of high-grade, nonmetastasizing, resectable osteosarcoma following complete surgical removal in children, adolescents, and young adults, aged two to 30 years.[1][6][7] Osteosarcoma is diagnosed in about 1,000 individuals in Europe and the USA per year, most under the age of 30.[8] The drug is used in combination with postoperative, multiagent chemotherapy to kill remaining cancer cells and improve a patient’s chance of overall survival.[6]

In a phase-III clinical trial in about 800 newly diagnosed osteosarcoma patients, mifamurtide was combined with the chemotherapeutic agents doxorubicin and methotrexate, with or without cisplatin and ifosfamide. The mortality could be lowered by 30% versus chemotherapy plus placebo. Six years after the treatment, 78% of patients were still alive. This equals an absolute risk reduction of 8% .[1]

In a clinical study, mifamurtide was given to 332 subjects (half of whom were under age of 16) and most side effects were found to be mild to moderate in nature. Most patients experience fewer adverse events with subsequent administration.[9][10]Common side effects include fever (about 90%), vomiting, fatigue and tachycardia (about 50%), infections, anaemia, anorexia, headache, diarrhoea and constipation(>10%).[1][11]

After application of the liposomal infusion, the drug is cleared from the plasma within minutes and is concentrated in lung, liver, spleen, nasopharynx, and thyroid. The terminal half-life is 18 hours. In patients receiving a second treatment after 11–12 weeks, no accumulation effects were observed.[12]

Mifamurtide is a fully synthetic derivative of muramyl dipeptide (MDP), the smallest naturally occurring immune stimulatory component of cell walls from Mycobacterium species. It has similar immunostimulatory effects as natural MDP with the advantage of a longer half-life in plasma.

NOD2 is a pattern recognition receptor which is found in several kinds of white blood cells, mainly monocytes and macrophages. It recognises muramyl dipeptide, a component of the cell wall of bacteria. Mifamurtide simulates a bacterial infection by binding to NOD2, activating white cells. This results in an increased production of TNF-α, interleukin 1,interleukin 6, interleukin 8, interleukin 12, and other cytokines, as well as ICAM-1. The activated white cells attack cancer cells, but not, at least in vitro, other cells.[13]

Consequently, the combination of mifamurtide with these types of drugs is contraindicated. However, mifamurtide can be coadministered with low doses of NSAIDs. No evidence suggests mifamurtide interacts with the studied chemotherapeutics, or with the cytochrome P450 system.[14] 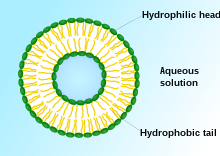 Scheme of a liposome formed by phospholipids in an aqueous solution

Mifamurtide is muramyl tripeptide phosphatidylethanolamine (MTP-PE), a synthetic analogue of muramyl dipeptide. The side chains of the molecule give it a longer elimination half-life than the natural substance. The substance is applied encapsulated into liposomes (L-MTP-PE). Being a phospholipid, it accumulates in the lipid bilayer of the liposomes in the infusion.[15]

One method of synthesis (shown first) is based on N,N’-dicyclohexylcarbodiimide (DCC) assisted esterification of N-acetylmuramyl-L-alanyl-D–isoglutaminyl–L-alanine with N-hydroxysuccinimide, followed by a condensation with 2-aminoethyl-2,3-dipalmitoylglycerylphosphoric acid in triethylamine (Et3N).[16] A different approach (shown second) uses N-acetylmuramyl-L-alanyl-D-isoglutamine, hydroxysuccinimide and alanyl-2-aminoethyl-2,3-dipalmitoylglycerylphosphoric acid;[17] that is, the alanine is introduced in the second step instead of the first.

Mifamurtide is an anticancer agent for the treatment of osteosarcoma, the most common primary malignancy of bone tissue mainly affecting children and adolescents.10

The drug was invented by Ciba-Geigy (now Novartis) in the early 1980s and the agent was subsequently licensed to Jenner Biotherapies in the 1990s.

IDM Pharma bought the rights to the drug from Jenner in April 2003.78 In March 2009, mifamurtide was approved in the 27 European Union member states plus Iceland, Liechtenstein and Norway via a centralized marketing authorization.

After the approval, IDM Pharma was acquired by Takeda, which began launching mifamurtide, as Mepact, in February 2010.

Mifamurtide, a fully synthetic lipophilic derivative of muramyl dipeptide (MDP), is muramyl tripeptide phosphatidylethanolamine (MTP-PE), which is formulated as a liposomal infusion.79 Being a phospholipid, mifamurtide accumulates in the lipid bilayer of the liposomes upon infusion.

After application of the liposomal infusion, the drug is cleared from the plasma within minutes. However, it is concentrated in lung, liver, spleen, nasopharynx and thyroid, and the terminal half-life is 18 h, which is longer than the natural substance.

Two synthetic routes have been reported,80,81 and Scheme 16 describes the more processamenable route.

Commercially available 1,2-dipalmitoyl-sn-glycero- 3-phosphoethanolamine (110) was coupled with N-Boc-L-alanine (111) by means of N-hydroxysuccinimide (112), DCC in DMF to give amide 113, which was followed by hydrogenolysis of the CBZ group to give the corresponding L-alanyl-phosphoric acid 114.

Next, commercially available N-acetylmuramoyl-L-alanyl-Disoglutamine (115) was subjected to hydroxybenzotriazole (HOBT) and DIC in DMF to provide the corresponding succinimide ester 116 which was condensed with compound 114 to provide mifamurtide (IX).

No yields were provided for these transformations.

Resectable osteosarcoma (a rare but the main cause of death for children and young people osteoma), having the formula as follows:

mifamurtide by certain stimuli such as macrophages and other white blood cells to kill tumor cells. Currently, mifamurtide listed injections into spherical liposome vesicles are muramyl tripeptide (MTP). This lipid trigger macrophages to consume mifamurtide. Once consumed mifamurtide, MTP-stimulated macrophages, in particular we will look for tumors in the liver, spleen and lung macrophages and kill it.

mifamurtide injection approved for marketing based on the results of phase III clinical study. Taiwan’s National Cancer Institute Cooperative Group (NCI) established by the Children’s Oncology Group (COG) study, complete treatment of this product in patients with osteosarcoma largest research project in the book of about 800 cases. Evaluation of mifamurtide and 3-4 adjuvant chemotherapy (cis molybdenum, doxorubicin, methotrexate, cyclophosphamide with or the same as) the results of combination therapy. Studies have shown that mifamurtide used in combination with chemotherapy can reduce the mortality rate of about 30%, 78% of treated patients survived more than six years. 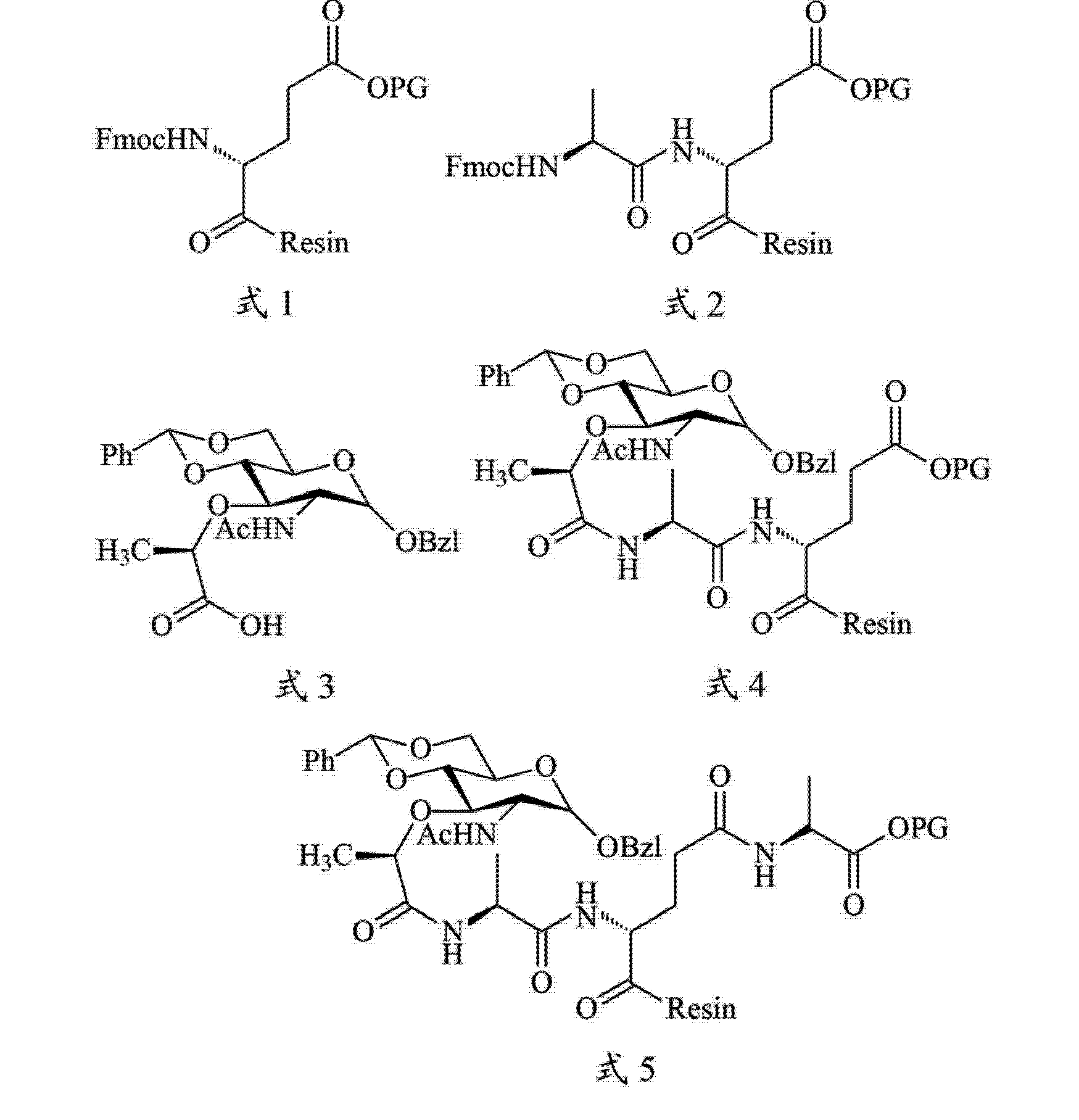 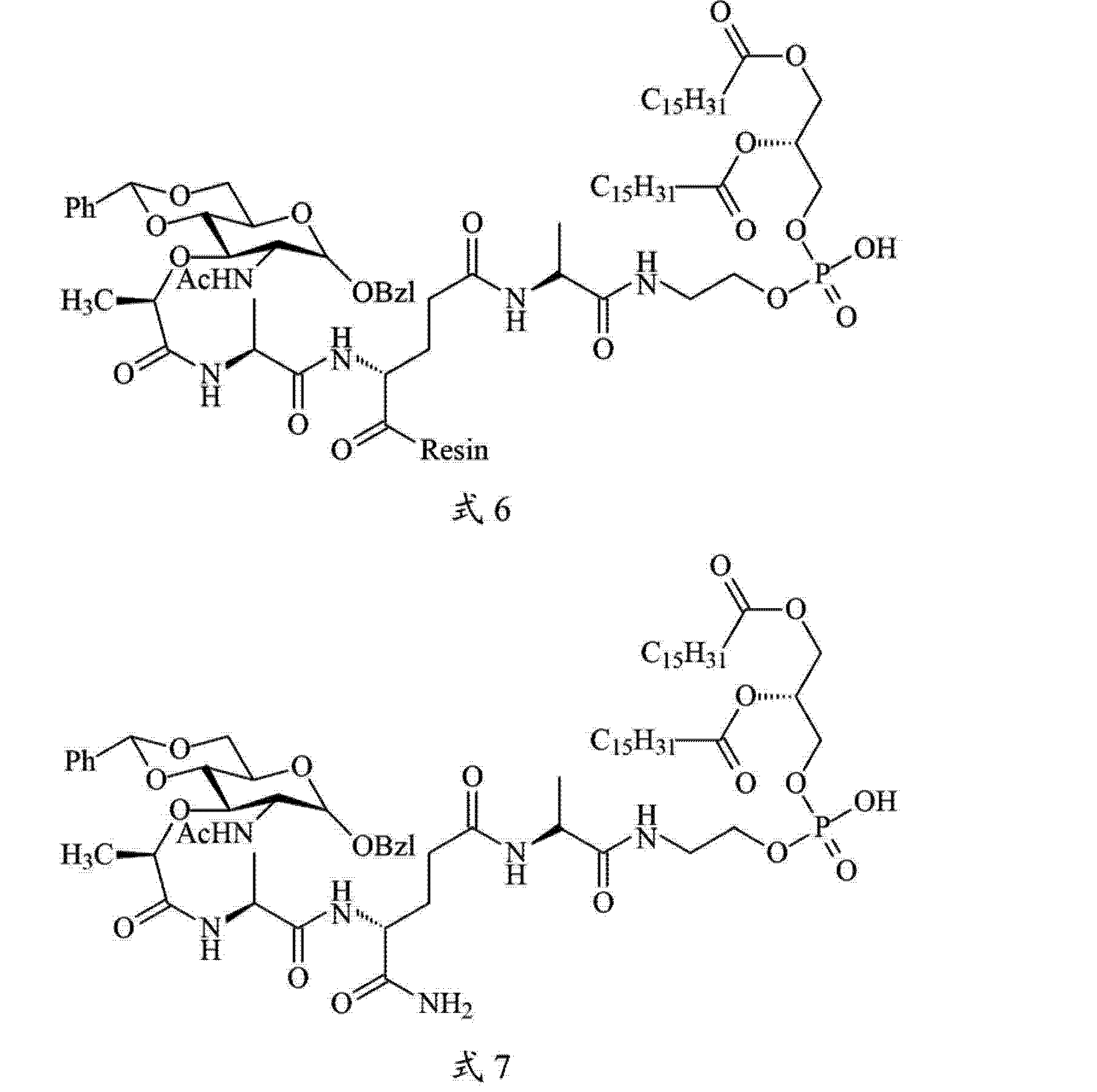 Example 11 to give the formula hydrogenolysis at atmospheric pressure to 16 hours Example 7 was added to 7.42 g compound 250ml single neck flask, dried 150ml of methanol was added to dissolve 0.4 g of 10% palladium on carbon.Completion of the reaction, palladium-carbon was filtered off, the filtrate was concentrated by rotary evaporation to 65ml, is mifamurtide crude peptide solution. Mifamurtide synthetic crude peptide: 15 [0173] Example

Example 12 to give the formula hydrogenolysis at atmospheric pressure to 16 hours Example 7 was added to 4.21 g compound 150ml single neck flask, dried 85ml of methanol was added to dissolve 0.2 g of 10% palladium on carbon.Completion of the reaction, palladium-carbon was filtered off, the filtrate was concentrated by rotary evaporation to 37ml, is mifamurtide crude peptide solution.

Preparation of mifamurtide of: 17 Example