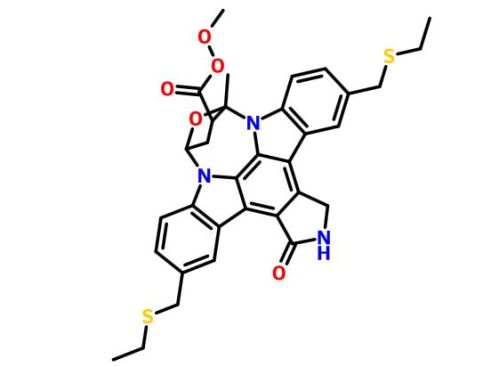 A MAP3K11 (MLK3) inhibitor potentially for the treatment of Parkinson’s disease.

Apoptosis has been proposed as a mechanism of cell death in Alzheimer’s, Huntington’s and Parkinson’s diseases and the occurrence of apoptosis in these disorders suggests a common mechanism.

Events such as oxidative stress, calcium toxicity, mitochondria defects, excitatory toxicity, and deficiency of survival factors are all postulated to play varying roles in the pathogenesis of the diseases.

However, the transcription factor c-jun may play a role in the pathology and cell death processes that occur in Alzheimer’s disease.

The commonality of biochemical events and pathways leading to cell death in these diseases continues to be an area under intense investigation.

The current therapy for PD and AD remains targeting replacement of lost transmitter, but the ultimate objective in neurodegenerative therapy is the functional restoration and/or cessation of progression of neuronal loss.

a novel approach for the treatment of neurodegenerative diseases through the development of kinase inhibitors that block the active cell death process at an early transcriptional independent step in the stress activated kinase cascade.

In particular, preclinical data will be presented on the c-Jun Amino Kinase pathway inhibitor, CEP-1347/KT-7515, with respect to it’s properties that make it a desirable clinical candidate for treatment of various neurodegenerative diseases.

CEP-1347 is also known as KT-7515 and is being developed by Cephalon and Kyowa Hakko for treatment of Parkinson’s disease and cognitive disorders. 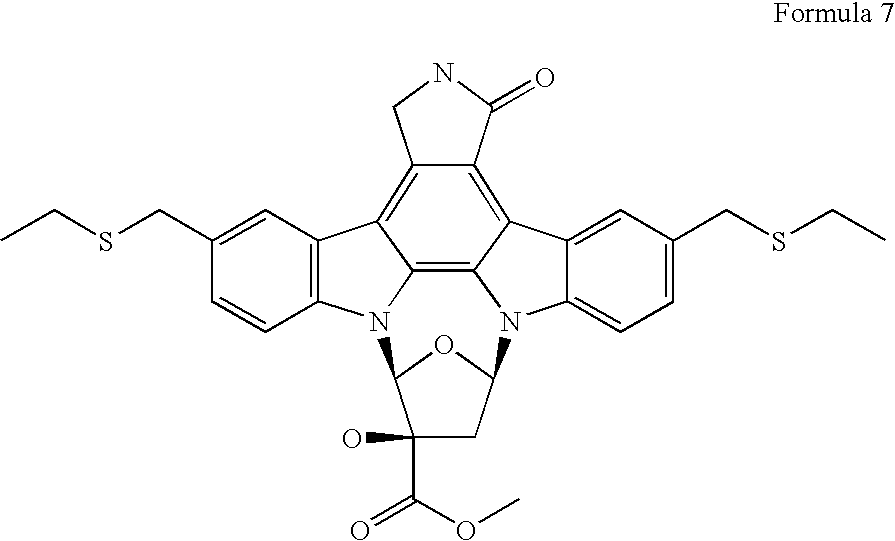 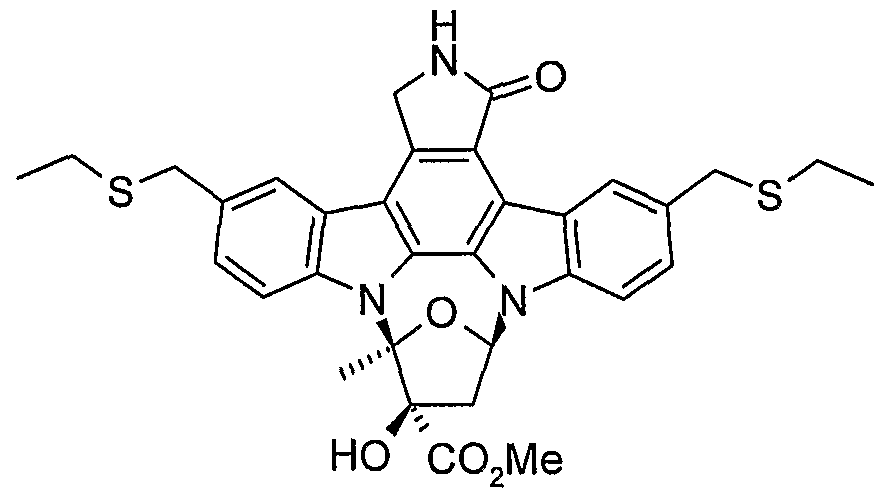 The following patent documents relate to Compound I, including its medical use and synthesis: WO 9402488, WO9749406, US 5621100, EP 0651754 and EP 112 932. By the known methods, Compound I is synthesized in a solid amorphous form. The inventors have now discovered 5 crystalline forms of Compound I (named alpha, beta, gamma, delta and epsilon) thereby providing an opportunity to improve the manufacturing process of Compound I and its pharmaceutical use. There exists a need for crystalline forms, which may exhibit desirable and beneficial chemical and physical properties. There also exists a need for reliable and reproducible methods for the manufacture, purification, and formulation of Compound I to permit its feasible commercialisation.

Example 1. Preparation of crystalline alpha form of Compound I

6.0 g amorphous Compound I was dissolved in 30 ml acetone. 0,6 g potassium carbonate was added and the suspension was stirred at room temperature for 1 hour before it was filtered to remove potential minor insoluble impurities and inorganic salts. The filter cake was washed with acetone. The filtrate was then evaporated on a rotary evaporator under reduced pressure at 60°C to a final volume of 10 ml to which 100 ml methanol was added slowly. The product separated as an oil, which almost dissolved on heating to reflux. Subsequently the residual insoluble impurities were removed by filtration. The filtrate was left with stirring at room temperature. A crystalline solid separated and was isolated by filtration. The filter cake was washed with methanol and dried in vacuo at 60°C overnight. Yield 2,83 g (47%), mp=182.4°C (DSC onset value), Weight loss by heating: 0.5%, Elemental analysis: 6.71%N, 63.93%C, 5.48%H, theoretical values corrected for 0.5% H2O: 6.79%N, 64.05%C, 5.43%H. XRPD analysis conforms with the alpha form. Method II):

The synthesis of the title compound used as the starting material was the indolocarbazole alkaloid K-252A (I). Compound (I) was protected as the diacetyl derivative (II) by treatment with Ac2O and DMAP. Formylation of (II) with dichloromethyl methyl ether in the presence of TiCl4 afforded dialdehyde (III), which was further reduced to diol (IV) using NaBH4 in MeOH-CHCl3. Condensation of diol (IV) with ethanethiol in the presence of camphorsulfonic acid furnished the bis-sulfanyl compound (V). The acetyl protecting groups of (V) were finally removed by treatment with sodium methoxide. Alternatively, diol (IV) was first deacetylated by treatment with NaOMe, and the deprotected bis(hydroxymethyl) compound (VI) was then condensed with ethanethiol to produce the title bis-sulfayl compound 8.