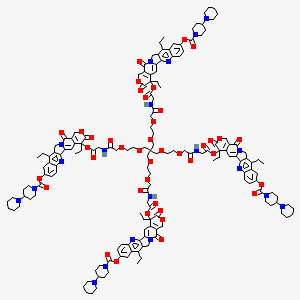 NKTR-102 is currently being developed by Nektar. According to the company’s news release, this agent exhibits a very high response rate and excellent clinical benefit rate in patients with metastatic breast cancer, and importantly, this anti-tumor activity is maintained in each of the poor prognosis subsets within the study. The data from the Phase 2 study also shows highly promising PFS of 5.3 months and OS of 13.1 months in the every three week dose schedule, which was also very well-tolerated. As a novel topoisomerase I inhibitor in breast cancer, NKTR-102 holds great therapeutic potential and allows us to address the challenge of resistance in this setting

NKTR-102 (PEG-irinotecan), a PEGylated form of irinotecan, is in clinical development by Nektar Therapeutics for the treatment of multiple solid tumors, including colorectal cancer, metastatic or locally advanced breast cancer, metastatic or locally advanced ovarian cancer and gastrointestinal cancer. No recent development has been reported for phase I clinical trials for the treatment of gastrointestinal cancer.

In preclinical studies, NKTR-102 resulted in significantly higher reduction in tumor growth than irinotecan in colon, lung and breast tumors. The company believes that following intravenous administration of NKTR-102, irinotecan will be released slowly, resulting in prolonged systemic exposure of irinotecan. Irinotecan is a cytotoxic anticancer agent used extensively to treat colorectal, lung, esophageal and other solid tumors. In 2011, orphan drug designation was assigned to the compound in the U.S. for the treatment of ovarian cancer.

Etirinotecan pegol (NKTR-102) is the first long-acting topoisomerase I-inhibitor (Topo I) designed to concentrate in tumor tissue, provide sustained tumor suppression throughout the entire chemotherapy cycle, and to reduce the peak exposures that are associated with toxicities of other cytotoxics. Etirinotecan pegol was invented by Nektar using its advanced polymer conjugate technology platform, and is the first oncology product candidate to leverage Nektar’s releasable polymer technology platform.

Topo I-inhibitors are important chemotherapeutic agents used to treat cancer. Immediately after dosing, however, standard topo I-inhibitors reach high peak concentrations and diffuse quickly throughout the body—penetrating and damaging healthy tissue, such as bone marrow, as well as tumor tissue. Subsequent rapid metabolism limits topo I exposure in tumor cells, reducing the duration of their effect and resulting in a much lower tumor exposure to the active metabolite that may limit their efficacy.

Etirinotecan pegol is a novel chemotherapeutic designed to enhance the anti-cancer effects of topo I-inhibition while minimizing its toxicities. Unlike first generation topo I-inhibitors that exhibit a high initial peak concentration and short half-life, etirinotecan pegol’s unique pro-drug design results in a lowered initial peak concentration of active topo I inhibitor in the blood. The large etirinotecan pegol molecule is inactive when administered. Over time, the body’s natural enzymatic processes slowly metabolize the linkers within the molecule, continuously freeing active drug that then works to stop tumor cell division through inhibition of topo I.

Data from a Phase 2 clinical study of etirinotecan pegol in metastatic breast cancer were published in the November 2013 issue of The Lancet Oncology (click here to view manuscript) These data were previously presented at the 2011 ASCO Annual meeting (click here to download this presentation).

Data from a Phase 2 clinical study of etirinotecan pegol in platinum-resistant/refractory ovarian cancer were published in the September 30, 2013 online edition of the Journal of Clinical Oncology (click here to view abstract). These data were previously presented at the 2010 ASCO Meeting (click here to download this presentation).

Data from a Phase 2 clinical study of etirinotecan pegol in metastatic breast cancer were presented in an oral abstract session at the 2011 ASCO Breast Cancer Symposium by Agustin Garcia, MD. View presentation slides.

Data from a Phase 2 clinical study of NKTR-102 in a subpopulation of patients with platinum-resistant/refractory ovarian cancer and prior Doxil® (pegylated liposomal doxorubicin or PLD) treatment were presented at the 2011 ASCO Annual Meeting by Agustin Garcia, MD. (click here to download this presentation).

2014 events related to this product

Human HT29 colon tumor xenografts were subcutaneously implanted in athymic nude mice. After about two weeks of adequate tumor growth (100 to 250 mg), these animals were divided into different groups of ten mice each. One group was dosed with normal saline (control), a second group was dosed with 60 mg/kg of irinotecan, and the third group was dosed with 60 mg/kg of the 4-arm PEG-GLY-Irino-20K (dose calculated per irinotecan content). Doses were administered intraveneously, with one dose administered every 4 days for a total of 3 administered doses. The mice were observed daily and the tumors were measured with calipers twice a week. FIG.1 shows the effect of irinotecan and PEG-irinotecan treatment on HT29 colon tumors in athymic nude mice.

As can be seen from the results depicted in FIG. 1, mice treated with both irinotecan and 4-arm-PEG-GLY-Irino-20K exhibited a delay in tumor growth (anti-tumor activity) that was significantly improved when compared to the control. Moreover, the delay in tumor growth was significantly better for the 4-arm-PEG-GLY-Irino-20K group of mice when compared to the group of animals administered unconjugated irinotecan.

4-arm-PEG-GLY-IRINO-40K was prepared in an identical fashion to that described for the 20K compound in Example 1, with the exception that in step C, the multi-armed activated PEG reagent employed was 4 arm-PEG(40K)-CM rather than the 20K material.

4-arm PEG-GLY-SN-38-20K was prepared in a similar fashion to its irinotecan counterpart as described in Example 1, with the exception that the active agent employed was SN-38, an active metabolite of camptothecin, rather than irinotecan, where the phenolic-OH of SN-38 was protected with MEMCI (2-methoxyethoxymethyl chloride) during the chemical transformations, followed by deprotection with TEA to provide the desired multi-armed conjugate.

4-arm PEG-GLY-SN-38-40K was prepared in a similar fashion to the 20K version described above, with the exception that the multi-armed activated PEG reagent employed was 4 arm-PEG(40K)-CM rather than the 20K material.

2-(2-t-Boc-aminoethoxy)ethoxycarbonyl-irinotecan (2) (4.7 g, 5.75 mmol) was dissolved in 60 mL CH2Cl2, and trifluoroacetic acid (TFA) (20 mL) was added at RT. The reaction solution was stirred for 2 hours. The solvents were removed under vacuum and the residue was added to ethyl ether and filtered to give a yellow solid as product 3 (4.3 g, yield 90%).

Irinotecan (Camptosar, Pfizer; Campto, Yakult Honsha) is a drug used for the treatment of cancer.

Irinotecan prevents DNA from unwinding by inhibition of topoisomerase 1.[1] In chemical terms, it is a semisynthetic analogue of the natural alkaloid camptothecin.

Its main use is in colon cancer, in particular, in combination with other chemotherapy agents. This includes the regimen FOLFIRI, which consists of infusional 5-fluorouracil, leucovorin, and irinotecan.

Irinotecan received accelerated approval by the U.S. Food and Drug Administration (FDA) in 1996[2] and full approval in 1998.[3] During development, it was known as CPT-11.

Click on genes, proteins and metabolites below to link to respective articles. [§ 1]

The most significant adverse effects of irinotecan are severe diarrhea and extreme suppression of the immune system.

Irinotecan-associated diarrhea is severe and clinically significant, sometimes leading to severe dehydration requiring hospitalization or intensive care unit admission. This side-effect is managed with the aggressive use of antidiarrheals such as loperamide or Lomotil with the first loose bowel movement.

The immune system is adversely impacted by irinotecan. This is reflected in dramatically lowered white blood cell counts in the blood, in particular the neutrophils. The patient may experience a period of neutropenia (a clinically significant decrease of neutrophils in the blood) while the bone marrow increases white cell production to compensate.

Irinotecan is converted by an enzyme into its active metabolite SN-38, which is in turn inactivated by the enzyme UGT1A1 by glucuronidation.

People with variants of the UGT1A1 called TA7, also known as the “*28 variant”, express fewer UGT1A1 enzymes in their liver and often suffer from Gilbert’s syndrome. During chemotherapy, they effectively receive a larger than expected dose because their bodies are not able to clear irinotecan as fast as others. In studies this corresponds to higher incidences of severe neutropenia and diarrhea.[4]

In 2004, a clinical study was performed that both validated prospectively the association of the *28 variant with greater toxicity and the ability of genetic testing in predicting that toxicity before chemotherapy administration.[4]

In 2005, the FDA made changes to the labeling of irinotecan to add pharmacogenomics recommendations, such that irinotecan recipients with a homozygous (both of the two gene copies) polymorphism in UGT1A1 gene, to be specific, the *28 variant, should be considered for reduced drug doses.[5] Irinotecan is one of the first widely used chemotherapy agents that is dosed according to the recipient’s genotype.[6]