The US Food and Drug Administration (FDA) has approved fexinidazole as the first all-oral treatment for both stages of the Trypanosoma brucei gambiense form of sleeping sickness (Human African trypanosomiasis) in patients 6 years of age and older and weighing at least 20 kg.
Fexinidazole was developed as part of an innovative partnership between the non-profit research and development organization Drugs for Neglected Diseases initiative (DNDi), which conducted the pivotal clinical trials for this treatment, in partnership with the National Sleeping Sickness Programs of the Democratic Republic of Congo (DRC) and Central African Republic (CAR), and Sanofi.

Sleeping sickness is a parasitic disease transmitted by the bite of an infected tse-tse fly. It affects mostly populations living in remote rural areas of sub-Saharan Africa, where about 65 million people are at risk of infection. Left untreated, sleeping sickness is almost always fatal. Through Sanofi’s collaboration the number of sleeping sickness cases reported to the WHO has been reduced by ~97% between 2001 and 2020. DNDi, Sanofi and partners are deeply committed to ensuring access to fexinidazole in all sleeping sickness-endemic countries.

Current treatment options for the disease are effective, but burdensome for patients and health workers due to the need for infusion or injection, requiring hospitalization, especially challenging for people living in remote areas.

“Having a simple, all-oral treatment for sleeping sickness is a dream come true for frontline clinicians,” said Dr Bernard Pécoul, DNDi Executive Director. “We are proud of this latest milestone in our long-term partnership with Sanofi, developed in close collaboration with researchers in countries hard-hit by sleeping sickness.”

“This FDA approval is a key milestone in Sanofi’s long-term commitment to fight sleeping sickness, started 20 years ago alongside the WHO through an ambitious partnership to combat Neglected Tropical Diseases” said Luc Kuykens, Senior Vice President, Sanofi Global Health unit. “Following the positive scientific opinion granted by the European Medicines Agency end 2018, the FDA approval is an important step to revitalize efforts to support the sustainable elimination of the disease”.

As a result of FDA approval, a Tropical Disease Priority Review Voucher (PRV) has been awarded to DNDi. The FDA Tropical Disease PRV Program was established in 2007 to incentivize development of new treatments for neglected tropical diseases, including sleeping sickness. Any benefits from the PRV will be shared between Sanofi and DNDi, which will enable continued investments in innovating for and ensuring access to new health tools for sleeping sickness and other neglected diseases. Sanofi commits to continue to provide the drug free-of-charge to the World Health Organization for distribution to affected countries, as part of a long-term collaboration with WHO.

About Sleeping sickness
Sleeping sickness, or human African trypanosomiasis (HAT), is usually fatal without treatment. Transmitted by the bite of an infected tse-tse fly, following a period with nonspecific symptoms, it evolves to cause neuropsychiatric symptoms, including abnormal behaviour, and a debilitating disruption of sleep patterns that have given this neglected disease its name. About 65 million people in sub-Saharan Africa are at moderate to very high risk of infection.

Fexinidazole is an antiparasitic agent.[1] It has activity against Trypanosoma cruzi, Tritrichomonas foetus, Trichomonas vaginalis,Entamoeba histolytica,[1] Trypanosoma brucei,[2] and Leishmania donovani.[3] The biologically relevant active metabolites in vivo are the sulfoxide and sulfone [3][4]

Fexinidazole was discovered by the German pharmaceutical company Hoechst AG, but its development as a pharmaceutical was halted in the 1980s.[5] Fexinidazole is now being studied through a collaboration between Sanofi and the Drugs for Neglected Diseases Initiative for the treatment of Chagas disease and human African trypanosomiasis (sleeping sickness).[6][7] Fexinidazole is the first drug candidate for the treatment of advanced-stage sleeping sickness in thirty years.[8]

Fexinidazole is currently in phase II/III clinical development at Drugs for Neglected Diseases Initiative for the oral treatment of African trypanosomiasis (sleeping sickness). In May 2009, Sanofi (formerly known as sanofi-aventis) licensed the drug candidate to Drugs for Neglected Diseases Initiative for the development, manufacturing and distribution as a treatment of human African trypanosomiasis. Once approved, the companies plan to make the drug available on a nonprofit basis.

Fexinidazole was originally developed by a German pharmaceutical company called Hoechst, now part of Sanofi; however, its development was abandoned in the 1980s when the company gave up its tropical disease programs. Fexinidazole is one of a class of drugs known as azoles, like fluconazole, that work against fungi and may work against cancer.

Method for the preparation of fexinidazole, useful for the treatment of parasitic diseases, visceral leishmaniasis, chagas disease and human African trypanosomiasis. Family members of the product patent, WO2005037759, are expected to expire from October 2024. This to be the first application from Drugs for Neglected Diseases Initiative (DNDi) on this API. DNDi in collaboration with Sanofi, the Swiss Tropical & Public Health Institute and the University of Dundee, is developing fexinidazole, an antiparasitic agent, for treating human African trypanosomiasis (HAT) and visceral Leishmaniasis (VL). By June 2013, phase I clinical studies had been completed and at that time, DNDi was planning to initiate a phase II proof-of-concept study in VL patients in early 2013. 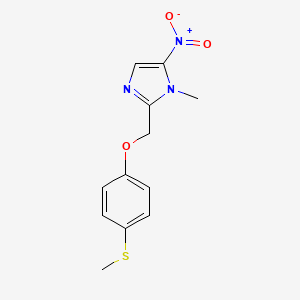 Process for preparing fexinidazole – comprising the reaction of 1-methyl-2-hydroxymethyl-5-nitro-imidazole with methanesulfonyl chloride, followed by reaction with 4-methylmercapto-phenol, and further manipulative steps.

A process for preparing fexinidazole comprising the reaction of 1-methyl-2-hydroxymethyl-5-nitro-imidazole with methanesulfonyl chloride in the presence of a suspension of powdered alkaline carbonate (eg potassium carbonate) in an anhydrous organic solvent (eg acetone), followed by reaction with 4-methylmercapto-phenol, removal of hydrochloride salt, and isolation and purification is claimed. Also claimed is their use for treating parasitic diseases, visceral leishmaniasis, chagas disease, and human African trypanosomiasis. Fexinidazole is known to be an antiparasitic agent.