The structure of HER2 and pertuzumab 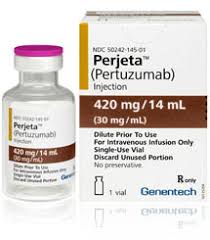 Sept. 30, 2013 — The U.S. Food and Drug Administration today granted accelerated approval to Perjeta (pertuzumab) as part of a complete treatment regimen for patients with early stage breast cancer before surgery (neoadjuvant setting). Perjeta is the first FDA-approved drug for the neoadjuvant treatment of breast cancer.

cut paste of my old article

The structure of HER2 and pertuzumab

The European Medicines Agency (EMA) has approved Roche’s PERJETATM (pertuzumab) RG1273 for patients with previously untreated HER2-positive metastatic breast cancer (mBC). PERJETA is approved in combination with Herceptin® (trastuzumab) and docetaxel in adult patients with HER2-positive metastatic or locally recurrent unresectable breast cancer, who have not received previous anti-HER2 therapy or chemotherapy for their metastatic disease\
The European approval comes after the Phase III CLEOPATRA trial showed that the combination of PERJETA, Herceptin and chemotherapy provided patients with a median of 6.1 months longer without their disease worsening or death (progression-free survival, PFS) and provided a 34 percent reduction in the risk of death (overall survival) compared to Herceptin and chemotherapy alone.
Herceptin was the first monoclonal antibody developed for the treatment of HER2-positive breast cancer and has increased survival times for patients so that they are now the same as for patients with HER2-negative breast cancer. Before Herceptin treatment, shorter survival outcomes were expected for patients diagnosed with HER2-positive breast cancer, compared to patients with HER2-negative disease.(1) In the CLEOPATRA study, PERJETA in combination with Herceptin and chemotherapy has shown the extension of survival times for patients with this aggressive disease even further than Herceptin
About PERJETA
PERJETA is designed specifically to prevent the HER2 receptor from pairing (dimerising) with other HER receptors (EGFR/HER1, HER3 and HER4) on the surface of cells, a process that is believed to play a role in tumour growth and survival. Binding of PERJETA to HER2 may also signal the body’s immune system to destroy the cancer cells. The combination of PERJETA, Herceptin and chemotherapy is thought to provide a more comprehensive blockade of HER signalling pathways.

Pertuzumab (also called 2C4, trade name Perjeta) is a monoclonal antibody. The first of its class in a line of agents called “HER dimerization inhibitors”. By binding to HER2, it inhibits the dimerization of HER2 with other HER receptors, which is hypothesized to result in slowed tumor growth.[1] Pertuzumab received US FDA approval for the treatment of HER2-positive metastatic breast cancer on June 8, 2012.[2] Pertuzumab was developed at Genentech and is now owned by Roche which acquired Genentech in 2009.

Early clinical trials of pertuzumab in prostate, breast, and ovarian cancers have been met with limited success.[3]

The dosage of pertuzumab used in the pivotal phase III CLEOPATRA (Clinical Evaluation of Pertuzumab and Trastuzumab) trial was as follows: IV 840 mg loading dose followed by IV 420 mg every three weeks.[4]

About the CLEOPATRA study
CLEOPATRA (CLinical Evaluation Of Pertuzumab And TRAstuzumab) is an international, phase III, randomised, double-blind, placebo-controlled study. The study evaluated the efficacy and safety profile of PERJETA combined with Herceptin and docetaxel chemotherapy compared to Herceptin and chemotherapy plus placebo in 808 people with previously untreated HER2-positive mBC or that had returned after prior therapy in the adjuvant (after surgery) or neoadjuvant (before surgery) setting.
In CLEOPATRA, the most common adverse reactions (rate greater than 30 percent) seen with the combination of PERJETA, Herceptin and chemotherapy were diarrhoea, hair loss, low white blood cell count with or without fever, upset stomach, fatigue, rash and peripheral neuropathy (numbness, tingling or damage to the nerves). The most common Grade 3–4 adverse events (rate greater than 2 percent) were low white blood cell count with or without fever, decrease in a certain type of white blood cell, diarrhoea, damage to the nerves, decrease in red blood cell count, weakness and fatigue.
About breast cancer
Breast cancer is the most common cancer among women worldwide.(4) Each year, about 1.4 million new cases of breast cancer are diagnosed worldwide, and over 450,000 women will die of the disease annually.(4) In HER2-positive breast cancer, increased quantities of the human epidermal growth factor receptor 2 (HER2) are present on the surface of the tumour cells. This is known as “HER2 positivity” and affects approximately 15-20 percent of women with breast cancer.(5) HER2-positive cancer is a particularly aggressive form of breast cancer. 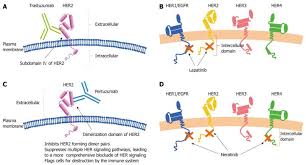