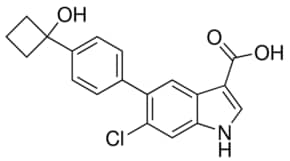 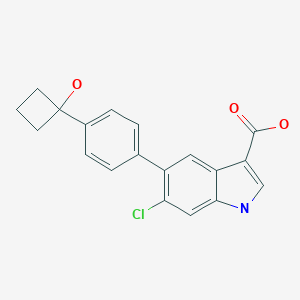 PF-06409577 is a potent and selective activator of 5′ adenosine monophosphate-activated protein kinase (AMPK).

Diabetes is a major public health concern because of its increasing prevalence and associated health risks. The disease is characterized by high levels of blood glucose resulting from defects in insulin production, insulin action, or both. Two major forms of diabetes are recognized, type I and type II. Type I diabetes develops when the body’s immune system destroys pancreatic beta cells, the only cells in the body that make the hormone insulin that regulates blood glucose. To survive, people with type 1 diabetes must have insulin delivered by injection or a pump. Type II diabetes accounts for about 90 to 95 percent of all diagnosed cases of diabetes. Type II diabetes usually begins as insulin resistance, a disorder in which the cells do not use insulin properly. Key target tissues, including liver, muscle, and adipose tissue, are resistant to the effects of insulin in stimulating glucose and lipid metabolism. As the need for insulin rises, the pancreas gradually loses its ability to produce insulin. Controlling type II diabetes with medication is essential; otherwise it can progress into pancreatic beta-cell failure requiring complete dependence on insulin.

Obesity increases the risk of type II diabetes as well as many other health conditions including coronary heart disease, stroke, and high blood pressure. More than one-third of U.S. adults (over 72 million people) and 17% of U.S. children are obese. During 1980-2008, obesity rates doubled for adults and tripled for children. During the past several decades, obesity rates for all population groups— regardless of age, sex, race, ethnicity, socioeconomic status, education level, or geographic region— have increased markedly.

Research has identified the enzyme 5′ adenosine monophosphate-activated protein kinase (AMPK) as a regulator of cellular and whole-body energy homeostasis. AMPK is activated by cellular stress resulting in downstream events that serve to conserve or generate ATP. AMPK is composed of three distinct subunits, each with multiple isoforms: the alpha subunit (alpha 1 or 2); the beta subunit (beta 1 or 2); and the gamma subunit (gamma 1, 2, or 3); for a total of twelve possible heterotrimeric isoforms.

Decreases in renal AMPK activation have been implicated in the etiology of diseases of the kidney, including diabetic nephropathy, acute kidney injury (AKI), and polycystic kidney disease (PKD); activation of AMPK through hormonal (adiponectin) or pharmacological (AICAR) mechanisms has been shown to be protective in rodent models of these diseases. In diabetic nephropathy decreased AMPK activation in podocytes occurs early in the disease and is associated with increased expression of the NADPH-Oxidase protein Nox4 and increased proteinuria. These effects were reduced following administration of the AMPK activators AICAR, metformin, and Adiponectin (Lee, MJ. et.al. American Journal of Physiology – Renal Physiology. 292.

The compounds of the present invention activate AMPK and are, therefore, useful in treating metabolic disorders such as diabetes, obesity, and dyslipidemia as well as the renal diseases chronic kidney disease, diabetic nephropathy, acute kidney injury and polycystic kidney disease.

Adenosine monophosphate-activated protein kinase (AMPK) is a protein kinase involved in maintaining energy homeostasis within cells. On the basis of human genetic association data, AMPK activators were pursued for the treatment of diabetic nephropathy. Identification of an indazole amide high throughput screening (HTS) hit followed by truncation to its minimal pharmacophore provided an indazole acid lead compound. Optimization of the core and aryl appendage improved oral absorption and culminated in the identification of indole acid, PF-06409577 (7). Compound 7 was advanced to first-in-human trials for the treatment of diabetic nephropathy.

Evolution of the Synthesis of AMPK Activators for the Treatment of Diabetic Nephropathy: From Three Preclinical Candidates to the Investigational New Drug PF-06409577

Indole acids 1, 2, and 3 are potent 5′-adenosine monophosphate-activated protein kinase (AMPK) activators for the potential treatment of diabetic nephropathy. Compounds 1–3 were scaled to supply material for preclinical studies, and indole 3 was selected for advancement to first-in-human clinical trials and scaled to kilogram quantities. The progression of the synthesis strategy for these AMPK activators is described, as routes were selected for efficient structure–activity relationship generation and then improved for larger scales. The developed sequences employed practical isolations of intermediates and APIs, reproducible cross-coupling, hydrolysis, and other transformations, and enhanced safety and purity profiles and led to the production of 40–50 g of 1and 2 and 2.4 kg of 3. Multiple polymorphs of 3 were observed, and conditions for the reproducible formation of crystalline material suitable for clinical development were identified.