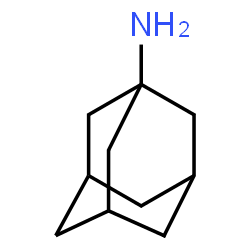 Amantadine (trade name Symmetrel, by Endo Pharmaceuticals) is a drug that has U.S. Food and Drug Administration approval for use both as an antiviral and an antiparkinsonian drug. It is the organic compound 1-adamantylamine or 1-aminoadamantane, meaning it consists of an adamantane backbone that has an amino group substituted at one of the four methyne positions. Rimantadineis a closely related derivative of adamantane with similar biological properties.

Apart from medical uses, this compound is useful as a building block in organic synthesis, allowing the insertion of an adamantyl group.

According to the U.S. Centers for Disease Control and Prevention (CDC) 100% of seasonal H3N2 and 2009 pandemic flu samples tested showed resistance to adamantanes, and amantadine is no longer recommended for treatment of influenza in the United States. Additionally, its effectiveness as an antiparkinsonian drug is undetermined, with a 2003 Cochrane Review concluding that there was insufficient evidence in support of or against its efficacy and safety.[2]

Amantadine is used to treat Parkinsons disease, as well as parkinsonism syndromes.[3] A 2003 Cochrane review concluded evidence was inadequate to support the use of amantadine for Parkinson’s disease.[2]

An extended release formulation is used to treat dyskinesia, a side effect of levodopa which is taken by people who have Parkinsons.[4]

Amantadine has been associated with several central nervous system (CNS) side effects, likely due to amantadine’s dopaminergic and adrenergic activity, and to a lesser extent, its activity as an anticholinergic. CNS side effects include nervousness, anxiety, agitation, insomnia, difficulty in concentrating, and exacerbations of pre-existing seizure disorders and psychiatric symptoms in patients with schizophrenia or Parkinson’s disease. The usefulness of amantadine as an anti-parkinsonian drug is somewhat limited by the need to screen patients for a history of seizures and psychiatric symptoms.

Rare cases of severe skin rashes, such as Stevens-Johnson syndrome,[10] and of suicidal ideation have also been reported in patients treated with amantadine.[11][12]

Livedo reticularis is a possible side effect of amantadine use for Parkinson’s disease.[13]

The mechanisms for amantadine’s antiviral and antiparkinsonian effects are unrelated. The mechanism of amantadine’s antiviral activity involves interference with the viral protein, M2, a proton channel.[14][15] After entry of the virus into cells via endocytosis, it is localized in acidic vacuoles; the M2 channel functions in transporting protons with the gradient from the vacuolar space into the interior of the virion. Acidification of the interior results in disassociation of ribonucleoproteins, and the initiation of viral replication. Amantadine and rimantadine function in a mechanistically identical fashion in entering the barrel of the tetrameric M2 channel, and blocking pore function (i.e., proton translocation). Resistance to the drug class is a consequence of mutations to the pore-lining residues of the channel, leading to the inability of the sterically bulky adamantane ring that both amantadine and rimantadine share, in entering in their usual way, into the channel.[citation needed]

Influenza B strains possess a structurally distinct M2 channels with channel-facing side chains that fully obstruct the channel vis-a-vis binding of adamantine-class channel inhibitors, while still allowing proton flow and channel function to occur; this constriction in the channels is responsible for the ineffectiveness of this drug and rimantadine towards all circulating Influenza B strains.

Amantadine is a weak antagonist of the NMDA-type glutamate receptor, increases dopamine release, and blocks dopamine reuptake.[16] Amantadine probably does not inhibit MAO enzyme.[17] Moreover, the mechanism of its antiparkinsonian effect is poorly understood.[citation needed] The drug has many effects in the brain, including release of dopamine and norepinephrine from nerve endings. It appears to be a weak NMDA receptor antagonist[18][19] as well as an anticholinergic, specifically a nicotinic alpha-7 antagonist like the similar pharmaceutical memantine.

In 2004, it was discovered that amantadine and memantine bind to and act as agonists of the σ1 receptor (Ki = 7.44 µM and 2.60 µM, respectively), and that activation of the σ1receptor is involved in the dopaminergic effects of amantadine at therapeutically relevant concentrations.[20] These findings may also extend to the other adamantanes such as adapromine, rimantadine, and bromantane, and could explain the psychostimulant-like effects of this family of compounds.[20]

Amantadine was approved by the U.S. Food and Drug Administration in October 1966 as a prophylactic agent against Asian influenza, and eventually received approval for the treatment of influenzavirus A[21][22][23][24] in adults. In 1969, the drug was also discovered by accident upon trying to help reduce symptoms of Parkinson’s disease, drug-induced extrapyramidal syndromes, and akathisia.

In 2017, the U.S. Food and Drug Administration approved the use of amantadine in an extended release formulation developed by Adamas Pharma for the treatment of dyskinesia, an adverse effect of levodopa, that people with Parkinson’s experience.[25]

In 2005, Chinese poultry farmers were reported to have used amantadine to protect birds against avian influenza.[26] In Western countries and according to international livestock regulations, amantadine is approved only for use in humans. Chickens in China have received an estimated 2.6 billion doses of amantadine.[26] Avian flu (H5N1) strains in China and southeast Asia are now resistant to amantadine, although strains circulating elsewhere still seem to be sensitive. If amantadine-resistant strains of the virus spread, the drugs of choice in an avian flu outbreak will probably be restricted to the scarcer and costlier oseltamivir and zanamivir, which work by a different mechanism and are less likely to trigger resistance.

On September 23, 2015, the US Food and Drug Administration announced the recall of Dingo Chip Twists “Chicken in the Middle” dog treats because the product has the potential to be contaminated with amantadine.[27]

An Improved Synthesis of Amantadine Hydrochloride