Home » PROCESS » Synthesis of isosorbide: an overview of challenging reactions

Isosorbide is a diol derived from sorbitol and obtained through dehydration reactions that has raised much interest in the literature over the past few decades. Thus, this platform chemical is a biobased alternative to a number of petrosourced molecules that can find applications in a large number of technical specialty fields, such as plasticizers, monomers, solvents or pharmaceuticals. The synthesis of isosorbide is still a technical challenge, as several competitive reactions must be simultaneously handled to promote a high molar yield and avoid side reactions, like degradation and polymerization. In this purpose, many studies have proposed innovative and varied methods with promising results. This review gives an overview of the synthesis strategies and catalysts developed to access this very attractive molecule, pointing out both the results obtained and the remaining issues connected to isosorbide synthesis.

Up to now, isosorbide has been used to access a large panel of molecules with relevant applicative properties and industrial reality (Scheme 2).12 Isosorbide dinitrate is used since several decades as vasodilator.13, 14 The dimethyl isosorbide is for example used as solvent in cosmetics15-17 and isosorbide diesters18-22 are actually industrially produced and commercialized as surfactants23-27 and PVC plasticizer28, 29 . The rigid scaffold associated to the bifunctionality of the molecule has attracted a strong interest in the field of polymers chemistry. Isosorbide and derivatives have thus been shown as suitable monomers for the industrial production of polycarbonates30, 31, polyesters32-41 or polyamides42-44, with attractive applicative properties. For example, isosorbide allows the increase of Tg, improves the scratch resistance and gives excellent optical properties to polymers. Polyesters and polycarbonates containing isosorbide have now commercial developments in food packaging, spray container, automotive, material for electronic devices … .

Isosorbide is a versatile platform molecule that shows key features to make it a credible alternative to petro-based products. The molecule is already available on large industrial scale (tens of thousands tons per years), which allows its development in commercial products such as active pharma ingredient, additive for cosmetic, speciality chemicals and polymers (ex: polycarbonates – polyesters). The development of more selective and higher yields syntheses of isosorbide are greatly needed to consolidate isosorbide production in view of a large expansion of its uses. Sorbitol conversion to isosorbide, relying on a starch route, is already a tough challenge. In a farther future, development of a credible path to isosorbide relying on cellulose source could even be thought of, provided that very versatile innovative catalysts will be developed in the next years. In all cases, a key issue is to develop catalysts that will avoid the massive production of “oligomeric/polymeric” by-products in order to access more sustainable processes by limiting the amounts of wastes produced during the synthesis. For this purpose, more selective homogeneous catalysts than the conventional Brønsted acids or alternative reaction conditions would be of strong interest. Selective and recyclable heterogeneous catalysts would be even more profitable as they would allow the continuous production of catalyst free isosorbide. This latter approach faces strong limitations due to the need of high reaction temperatures that often result in high amounts of side-products and the need of frequent and often tedious catalyst regeneration. Innovation concerning isosorbide synthesis is still an open field on which the design of efficient and robust catalysts, either homogeneous or heterogeneous, is a key issue. Such developments would pave the way to high scale effective processes considering altogether synthesis and purification of isosorbide. 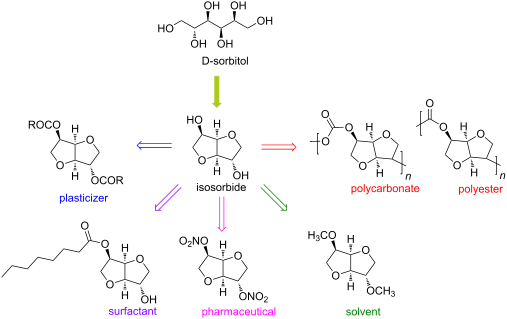 Isosorbide is a heterocyclic compound that is derived from glucose. Isosorbide and its two isomers, namely isoidide and isomannide, are 1,4:3,6-dianhydrohexitols. It is a white solid that is prepared from the double dehydration of sorbitol. Isosorbide is a non-toxic diolproduced from biobased feedstocks, that is biodegradable and thermally stable. It is used in medicine and has been touted as a potential biofeedstock.

Hydrogenation of glucose gives sorbitol. Isosorbide is obtained by double dehydration of sorbitol:

An intermediate in the dehydration is the monocycle sorbitan.[1]

Isosorbide is also used as a building block for bio based polymers such as polyesters.[3] 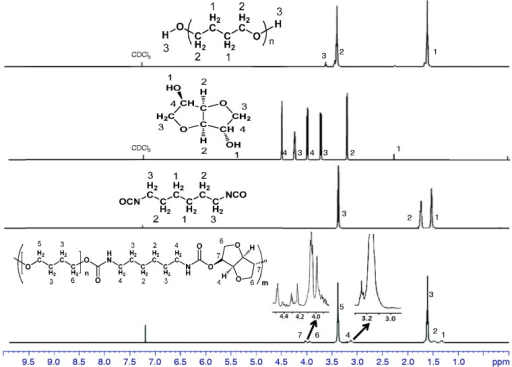 Catalytic amount of a nitrogen bicyclic base, i.e., DABCO, DBU and TBD is effective for the one-pot synthesis of heterocycles from 1,4-, 1,5-diols and 1,4-bifunctional compounds via dimethyl carbonate chemistry under neat conditions. Nitrogen bicyclic bases, that previously showed to enhance the reactivity of DMC in methoxycarbonylation reaction by BAc2 mechanism, are herein used for the first time as efficient catalysts for cyclization reaction encompassing both BAc2 and BAl2 pathways. This synthetic procedure was also applied to a large scale synthesis of cyclic sugars isosorbide and isomannide starting from D-sorbitol and D-mannitol, respectively. The resulting anhydro sugar alcohols were obtained as pure crystalline compounds that did not require any further purification or crystallization.

Larger scale synthesis of isosorbide: In a round bottom flask equipped with a reflux condenser, D-sorbitol (0.05 mol, 1.00 mol. eq.), DMC (0.44 mol, 8.00 mol. eq.), DBU (2.70 mmol, 0.05 mol. eq.) and MeOH (20.00 mL) were heated at reflux while stirring. The progress of the reaction was monitored by NMR. After 48 hours the reaction was stopped, cooled at room temperature and the mixture was filtered over Gooch n°4. Finally, DMC was evaporated under vacuum and the product was obtained as pure in 98% yield (7.90 g, 0.05 mol). Characterization data were consistent with those obtained for the commercially available compound.