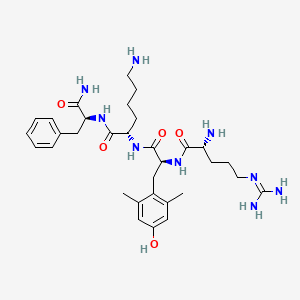 Elamipretide is a cardiolipin peroxidase inhibitor and mitochondria-targeting peptide, Improves Left Ventricular and Mitochondrial Function. In vitro: Elamipretide significantly increases enzymatic activities of both complexes to near normal levels.

Elamipretide (also known as SS-31 and Bendavia)[1][2] is a small mitochondrially-targeted tetrapeptide (D-Arg-dimethylTyr-Lys-Phe-NH2) that appears to reduce the production of toxic reactive oxygen species and stabilize cardiolipin.[3]

Stealth Peptides, a privately held company, was founded in 2006 to develop intellectual property licensed from several universities including elamipretide; it subsequently changed its name to Stealth BioTherapeutics.[4][5]

Also, the company is developing an oral formulation of elamipretide , which targets mitochondria and reduces the production of excess reactive oxygen species, for treating chronic heart failure. In January 2015, a phase II trial was ongoing . In July 2016, a phase II trial was initiated in Latvia, Spain and Hungary .

1 has been shown to affect the mitochondrial disease process by helping to protect organs from oxidative damage caused by excess ROS production and to restore normal ATP production.

The invention relates to a process for solution-phase synthesis of D- Arginyl-2,6-dimethyl-L-tyrosyl-L-lysyl-L-phenylalaninamide (abbreviated H-D-Arg-(2,6-Dimethyl)Tyr-L-Lys-L-Phe-NH2, development code SS-31 , MTP-131 , X-31) of Formula (I), an active ingredient developed by Stealth BioTherapeutics under the investigational drug brand names Bendavia® and Ocuvia®, for both common and rare diseases including a mitochondrial targeted therapy for ischemia reperfusion injury.

The product belongs to the class of so-called “Szeto-Schiller peptides”. Szeto-Sciller peptides or “SS peptides” are small, aromatic-cationic, water soluble, highly polar peptides, such as disclosed in US 6703483 and US 7576061 , which can readily penetrate cell membranes. The aromatic-cationic peptides include a minimum of two amino acids, and preferably include a minimum of four amino acids, covalently joined by peptide bonds. The maximum number of amino acids is about twenty amino acids covalently joined by peptide bonds. As described by EP 2012/2436390, optimally, the number of amino acids present in the SS peptides is four.

Mitochondria are the cell’s powerhouse, responsible for more than 90% of the energy our bodies need to sustain life and support growth. The energetics from mitochondria maintains healthy physiology and prevents disease. In many common and rare diseases, dysfunctional mitochondria are a key component of disease progression.

Further studies performed in a G93A mouse model of amyotrophic lateral sclerosis (ALS) demonstrated that the compound (5 mg/kg/day i.p. starting at 30 days of age) led to a significant delay in disease onset.

In the last few years the peptide H-D-Arg-(2,6-Dimethyl)Tyr-L-Lys-L-Phe-NH2, shown in Fig 1 , and its therapeutic activity have been disclosed and

claimed by in several patent applications.

EP 2436390, US 201 10245182 and US 201 10245183 claim topical anesthetic compositions for application to the skin for pain management or anti-skin aging agents, respectively, comprising Szeto-Schiller peptides; SS-31 is specifically claimed as active ingredient. Sequence of solid-phase synthesis is indicated as the preferred preparation process.

US 7718620 claims a process of treating or preventing ischemia-reperfusion injury of the kidney in a mammal by administrating an effective amount of an aromatic-cationic peptide. SS-31 is specifically claimed as active ingredient.

WO2005/001023 discloses a generical process and carrier complexes for delivering molecules to cells comprising a molecule and an aromatic cationic peptide of type D-Arg-Dmt-Lys-Phe-NH2. The tetrapeptide SS-31 is

specifically claimed as product useful for the process at claim 18.

WO 2013/086020, WO 2004/070054 and WO 2005/072295 provide processes for preventing mithochondrial permeability transition and reducing oxidative damage in a mammal, a removed organ, or a cell in need thereof and specifically claims the process wherein the peptide does not have mu-opioid receptor agonist activity, i.e., D-Arg-Dmt-Lys-Phe-NH2.

WO 2009/108695 discloses a process for protecting a kidney from renal injury which may be associated with decreased or blocked blood flow in the subject’s kidney or exposure to a nephrotoxic agent, such as a radiocontrast dye. The processes include administering to the subject an effective amount of an aromatic-cationic peptide to a subject in need thereof and one of the selected peptide is D-Arg-Dmt-Lys-Phe-NH2.

US 6703483 discloses a detailed procedure for the preparation of novel analogs of DALDA [H-Tyr-D-Arg-Phe-Lys-NH2], namely H-Dmt-D-Arg-Phe-Lys-NH2 using the solid-phase techniques and /?-methylbenzhydrylamine

resin and protocols that have been extensively used by inventor’s laboratory.

Most prior art processes for preparing the compound typically comprise conventionally performed peptide solid-phase synthesis with further purification by chromatography in order to obtain the requested purity for therapeutic use.

It is well known that solid-phase synthesis followed by chromatographic purification is time consuming, very expensive and very difficult to be scaled up on industrial scale, so the need of developing a process for large scale production is obvious. The compound is isolated as organic acid salt, as acetate or trifluoro acetate.

eddy et al., Adv. Exp. Med. Biol, 2009, 61 1 , 473 generally describes the liquid-phase synthesis of antioxidant peptides of Figure 1 and similar others (SS-02, SS-20), involving routinely used side chain protecting groups for amino acid building blocks. The guanidine group was protected with NO2 and the ε-ΝΗ2 of Lys was protected by Cbz or 2-Cl-Cbz. These peptides were

from the commercially available Boc-Lys(2-Cl-Cbz)-OH in two steps by amidation with NH4HCO3 in the presence of DCC/HOBt following a literature procedure [Ueyama et all, Biopolymers, 1992, 32, 1535, PubMed: 1457730], followed by exposure to TFA). Selective removal of the 2-Cl-Cbz in the

A stepwise procedure by standard solution peptide synthesis for preparation of potent μ agonist [DmtJDALDA and its conversion into a potent δ antagonist H-Dmt-Tic-Phe-Lys(Z)-OH by substitution of D-Arg with Tic to enhance the δ opioid agonist activity is described by Balboni et al., J. Med.

Despite the high overall yield in the solid-phase approach, it has several drawbacks for the scale-up process such as:

a. the application of the highly toxic and corrosive hydrogen fluoride for cleavage of the peptide from the resin,

b. low loading (0.3-0.35 mmol/g of resin) proved necessary for successful end-step, and

The invention relates to a more efficient process avoiding either solid-phase synthesis or chromatographic purification, more suitable for large scale production. The process of the invention is described in Scheme A.

The following abbreviations are used:

This process is a notable improvement with respect to the prior art and its advantages can be summarized as follows:

• The synthesis is performed in liquid phase allowing the scale up on industrial scale without need of special equipment; · The selection of the protecting group in the building blocks allows a straightforward synthesis with very simple deprotection at each step and minimize the formation of undesired by-product;

• Each intermediate can be crystallized allowing removal of impurities which are not transferred to the following step;