Tropical diseases caused by parasitic protozoa are a threat to human health, mainly in developing countries. Trypanosomiasis (Chagas disease and sleeping sickness) and leishmaniasis, inter alia, are classified as neglected tropical diseases, and over 400 million people are at risk of contracting these diseases.

In addition, a parasite of the Trypanosoma genus, Trypanosoma brucei brucei, is the causative agent of Nagana disease in wild and domestic animals, and this disease is a major obstacle to the economic development of affected rural areas.

Although some therapeutic agents for these diseases exist, they have limitations, such as serious side effects and the emergence of drug resistance. Thus, new and more effective antiprotozoal medicines are needed

Marine natural products have recently been considered to be good sources for drug leads. In particular, secondary metabolites produced by marine cyanobacteria have unique structures and versatile biological activities, and some of these compounds show antiprotozoal activities. For example, coibacin A isolated from cf. Oscillatoria sp. exhibited potent antileishmanial activity, and viridamide A isolated from Oscillatoria nigro-viridis showed antileishmanial and antitrypanosomal activities.

constituents of marine cyanobacteria and reported an antitrypanosomal cyclodepsipeptide, janadolide.

The marine cyanobacterium was collected at the coast near Hoshino, Okinawa. 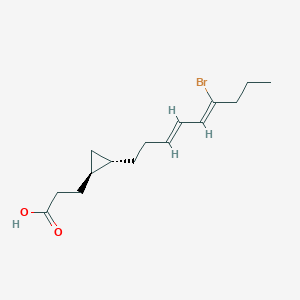 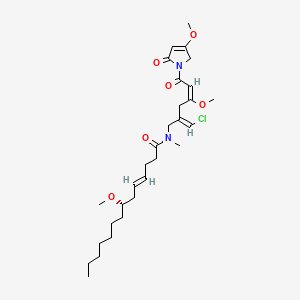 Recently, we isolated a new antitrypanosomal lactam, hoshinolactam (1), from a marine cyanobacterium.Structurally, 1 contains a cyclopropane ring and a γ-lactam ring. So far, some metabolites possessing either a cyclopropane ring or a γ-lactam ring have been discovered from marine cyanobacteria, such as majusculoic acid and malyngamide A. To the best of our knowledge, on the other hand, hoshinolactam (1) is the first compound discovered in marine cyanobacteria that possesses both of these ring systems. In addition, we clarified that 1 exhibited potent antitrypanosomal activity without cytotoxicity against human fetal lung fibroblast MRC-5 cells. Here, we report the isolation, structure elucidation, first total synthesis, and preliminary biological characterization of hoshinolactam (1).

Isolation and Total Synthesis of Hoshinolactam, an Antitrypanosomal Lactam from a Marine Cyanobacterium

In the search for new antiprotozoal substances, hoshinolactam, an antitrypanosomal lactam, was isolated from a marine cyanobacterium. The gross structure was elucidated by spectroscopic analyses, and the absolute configuration was determined by the first total synthesis. Hoshinolactam showed potent antitrypanosomal activity with an IC50 value of 3.9 nM without cytotoxicity against human fetal lung fibroblast MRC-5 cells (IC50 > 25 μM).