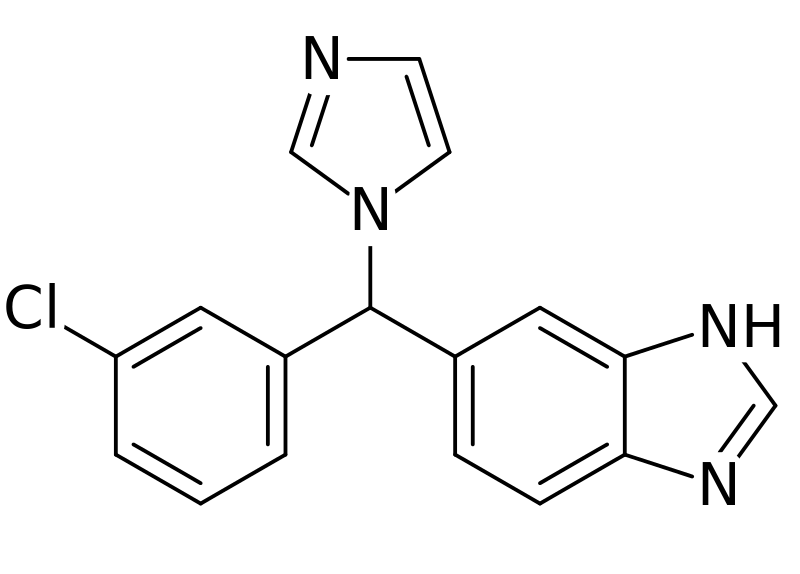 Liarozole synthesis from Lednicer book 6 (Drugs of the Future citation).

Liarozole fumarate is prepared as shown in Scheme 20970301a. Anisol is reacted with 3-chlorobenzoyl chloride (I) under Friedel-Craft conditions to give (3-chlorophenyl)(4-methoxyphenyl)methanone (II). Nitration of (II) is carried out in dichloromethane at 10 C to yield (III). The methoxy group in (III) is replaced by the amino group by means of NH3 in 2-propanol at 100 C under pressure, giving (IV). By reduction of the keto function of (IV) with sodium borohydride in 2-propanol, the corresponding alcohol (V) is obtained, which upon treatment with 1,1′-carbonyldiimidazole in refluxing dichloromethane yields the imidazolyl compound (VI). Hydrogenation of the nitro group in (VI), followed by cyclization of (VII) in a refluxing mixture of formic acid and 4N hydrochloric acid, gives the benzimidazole derivative (VIII). Finally, the treatment of (VIII) with fumaric acid in ethanol yields liarozole fumarate (IX).

Chemically liarozole is (±)-5-[3-chlorophenyl]-lH-imidazol-l-ylmethyl]-lH-benz- imidazole, and is represented by formula (I). As can be seen from the chemical structure, liarozole has one stereogenic center (indicated with an asterisk in formula (I)).

The subject of this invention is the enantiomerically pure dextrorotatory isomer or (+)-isomer of liarozole. Said isomer will hereinafter be referred to as (+)-liarozole. Many organic compounds exist in optically active forms, i.e. they have the ability to rotate the plane of plane-polarized light. In describing an optically active compound, the prefixes D and L or R and S are used to denote the absolute configuration of the molecule about its chiral center(s). The prefixes (+) and (-) or d and 1 are employed to designate the sign of rotation of plane-polarized light by the compound, with (-) or 1 meaning that the compound is iaevorotatory and with (+) or d meaning that the compound is dextrorotatory. For a given chemical structure the optically active isomers having an opposite sign of optical rotation are called enantiomers. Said enantiomers are identical except that they are mirror images of one another. A 1: 1 -mixture of such enantiomers is called a racemic mixture.

General preparation of structures including liarozole have been extensively described in EP-0,371,559 and EP-0,260,744.

Said functional derivative of formic acid is meant to comprise the halide, anhydride, amide and ester, including the ortho and imino ester form thereof. Also methanimidamide or an acid addition salt thereof can be used as cyclizing agent.

The general reaction conditions, work-up procedures and conventional isolation techniques for carrying out the above and following reactions are described in the prior art. When more specific conditions are required they are mentioned hereinunder. The enantiomerically pure intermediate diamine of formula (B)-(II) may be prepared by reducing an intermediate of formula (B)-(iπ) by a standard nitro-to-amine reduction reaction.

The desired enantiomer of the intermediate of formula (B)-(]H) can be prepared by fractional crystallization of a racemic mixture of the intermediate of formula (HI) with an enantiomerically pure chiral acid. Preferred chiral acid for the above fractional crystallization is 7,7-dimethyl-2-oxobicyclo[2.2.1]heptane-l-methanesulfonic acid (i.e. 10-camphorsulfonic acid).

The fractional crystallizations are suitably carried out below room temperature, preferably below 5°C.

It was also found that the subsequent reaction step can be carried out without any appreciable racemization.

A. Preparation of the intermediates

B. Preparation of the final compounds Example 3

A mixture of intermediate (11) (4.9 g), Raney nickel (2 g) and ethanol (100ml) was stirred and refluxed for 5 days, while every day an additional amount of Raney nickel (2 g) was added. The catalyst was filtered off and rinsed with dichloromethane. The filtrate was evaporated and the residue was purified twice by column chromatography (silica gel; CH2CI2/CH3OH 95:5 ; CH2CI2/CH3OH NH4OH 80:20:3). The eluent of the desired fraction was evaporated and the residue was converted into the hydrochloride salt in 2-propanol and ethanol. The salt was recrystallized from 2-butanone, yielding 1.8 g (37.2%) of (+)-(B)-5-[(3-chlorophenyl)(lH-imidazol-l-yl)methyl]-lH-benzimidazole