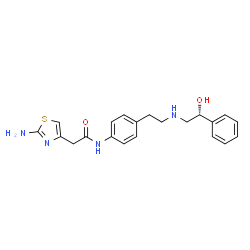 Mirabegron (YM-178) is the first β3-adrenoceptor agonist that is clinically effective for overactive bladder. Mirabegron (0.3 and 1 mg/kg) inhibits mechanosensitive single-unit afferent activities (SAAs) of Aδ fibers in response to bladder filling. Mirabegron activates the β3 adrenergic receptor in the detrusor muscle in the bladder, which leads to muscle relaxation and an increase in bladder capacity. Mirabegron (YM-178) acts partly as an irreversible or quasi-irreversible metabolism-dependent inhibitor of CYP2D6. Mirabegron at a dose of 3 mg/kg i.v. decreased the frequency of rhythmic bladder contraction induced by intravesical filling with saline without suppressing its amplitude in anesthetized rats. Mirabegron decreases primary bladder afferent activity and bladder microcontractions in rats. Mirabegron (YM-178) also reduced non-micturition bladder contractions in an awake rat model of bladder outlet obstruction.

Mirabegron is a white crystalline powder, not hygroscopic and freely soluble in dimethyl sulfoxide, soluble in methanol and soluble in water between neutral to acidic pH. The chemical name is 2-(2- Amino-1,3-thiazol-4-yl)-N-[4-(2-{[(2R)-2-hydroxy-2- phenylethyl]amino}ethyl)phenyl]acetamide., Mirabegron exhibits stereoisomerism due to the presence of one chiral centre. The R enantiomer has been used in the manufacture of the finished product. The enantiomeric purity is controlled routinely by chiral HPLC-UV. Polymorphism has been observed for the active substance. The polymorphic form α is routinely and consistently produced by the synthetic process and it is used in the manufacture of the finished product…….http://www.ema.europa.eu/docs/en_GB/document_library/EPAR_-_Public_assessment_report/human/002388/WC500137308.pdf

Mirabegron (formerly YM-178, trade name Myrbetriq, Betmiga in Spain) is a drug for the treatment of overactive bladder.[2] It was developed by Astellas Pharma and was approved in the United States in July 2012.[3]
Mirabegron activates the β3 adrenergic receptor in the detrusor muscle in the bladder, which leads to muscle relaxation and an increase in bladder capacity.[4]\
NMR PREDICT

PAPER
http://jocpr.com/vol7-iss4-2015/JCPR-2015-7-4-1473-1478.pdf
Journal of Chemical and Pharmaceutical Research, 2015, 7(4):1473-1478
In the first approach, the introduction of the chiral hydroxyl group was planned at the later stage (Scheme 1). Accordingly, 2-(4-nitrophenyl)ethyl amine 4 was protected as the Boc-derivative 5, followed by the reduction of the nitro group using stannous chloride to furnish corresponding aniline 6. Alternate reducing conditions such as hydrogenation in the presence of 10% Pd-C were also provided the desired 6 in good yield. Amide coupling of the aniline 6 with 2-(2-aminothiazol-4-yl) acetic acid 7 in the presence of EDC, HOBt/DIPEA furnished the desired amide 8. Interestingly, lower reactivity of 2-aminothiazole precluded any self-coupling of 7.

Removal of Boc-group in 8, set the stage for the critical step of introducing the chiral hydroxyl by means of stereocontrolled ring opening of the chiral (R)-styrene epoxide 10. Epoxide opening reaction of 10 was initially attempted with amine 9 in the presence of Et3N in MeOH as the solvent. Alternatively, epoxy opening was also performed under simple isopropanol reflux condition to get the desired 1. The desired product 1 was isolated in 27% yield after purification by column chromatography. This is due to the formation of N-alkylated derivatives of 1 by undesired reaction of 10 with amino functionalities of 1. However, the inefficiency of the epoxide opening reaction precluded a high purity of final product, Mirabegron 1. Since it is not practical to embark on repeated purifications at the last stage (which leads to poor yields), this route was not pursued for further optimization.
13C NMR PREDICT

By and O ° C under nitrogen protection temperature conditions, 7.3g (R) -2- amino _1_ benzeneethanol added 250mL three-necked flask, the stirring was dissolved in 50mL of dichloromethane Mira Veron Intermediate C was added dropwise to the reaction solution to form three-necked flask. Stirred for I hour under nitrogen, with stirring 4.12g of sodium borohydride was added to the reaction mixture. The reaction mixture was stirred (under TC 3 hours to TLC the reaction was complete. The reaction is complete the reaction mixture was added dropwise a saturated aqueous ammonium chloride solution IOmL quenched reaction was washed twice with 40mL of water, the organic phase was separated. The The organic phase at the conditions at 0 ° C was added concentrated sulfuric acid was stirred IOmL until TLC after 0.5 hours the reaction was complete, then was added 20mL of 20% aqueous sodium hydroxide solution to complete the reaction of the organic phase was adjusted to pH 10 and stirred for 15 minutes minutes solution. The organic phase first with 50mL saturated brine I times with IOg anhydrous sodium sulfate and concentrated to give crude product was recrystallized from methanol and water to give 18.7g of the final product Mira Veron purity of 99.33%, chiral purity of 99.01%, a yield of 88.12%.
Mira Veron use randomly selected samples prepared by the synthesis method of the present invention is detected by liquid chromatography.
Test conditions: Instrument: Agilent 1100 HPLC;
Column: Luna C18, 4.6mmX 250mm, 5 μ m;
Column temperature: 25 ° C;
flow rate: 1.0mL / min;
The detection wavelength: 2IOnm;
Injection volume: 5ul;
Mobile phase A: acetonitrile;
Mobile phase B: 0.1% phosphoric acid aqueous solution;
Running time: 40min.
FIG liquid chromatography after detection of the sample shown in Figure 1; results are shown in Table I.
Table 1: The Mira Veron chromatographic analysis sample preparation method of the present invention

U-913……….TREATMENT OF OVERACTIVE BLADDER WITH SYMPTOMS OF URGE URINARY INCONTINENCE, URGENCY, AND FREQUENCY

Overactive bladder (OAB) is characterized by symptoms of urinary urgency, with or without urgency incontinence, usually with increased daytime frequency and nocturia.(1-3) Current guidelines recommend oral antimuscarinics drugs as the first-line pharmacologic therapy in the management of OAB despite the companion adverse effects.(4, 5) Mirabegron is an orally active β3 adrenoceptor agonist approved by the FDA for treatment of OAB in 2012, which is an important step toward the better treatment options for the management of OAB.(6)

(R)-Styrene oxide 1 and 4-nitrophenethylamine 2 were exploited as starting materials in the first synthesis of mirabegron (Scheme 1). Heating 1 and 2 in i-propanol afforded amino alcohol 3, and then the amino group was protected by di-tert-butyl dicarbonate (Boc2O), followed by a condensation with 2-aminothiazol-4-acetic acid. Deprotection of the condensation product 7 finally afforded mirabegron.(7-10) Although reactions in the whole process were all conventional reactions, optically pure 1 was not industrially available, which restricted its application in industry.

(R)-Mandelic 8 and 4-nitrophenethylamine hydrochloride 9 were exploited as starting materials in an alternate route (Scheme 2). Condensation of 8 and 9 in the presence of 1-ethyl-3-(3-(dimethylamino)propyl)carbodiimide hydrochloride (EDCI), 1-hydroxybenzotriazole (HOBt), and triethylamine in N,N-dimethylformamide (DMF) furnished the corresponding amide 10, which was further reduced in the presence of borane-tetrahydrofuran complex in a mixed solution of 1,3-dimethyl-2-imidazolidinone (DMI) and tetrahydrofuran (THF), affording amine 11. The nitro group of 11 was then reduced by hydrogenation affording aniline 12 which was further amidated by an aqueous EDCI coupling affording mirabegron. This route was rather concise with only four steps, in which the sole stereogenic center was introduced via a bulk starting material 8.(11-13) However, usage of the costly EDCI twice, especially in the first step, led to a high cost and more impurities.

By DR ANTHONY MELVIN CRASTO Ph.D in FDA 2012 on August 12, 2015.
← MORINIDAZOLE 吗啉硝唑 Indian and Chinese API Manufacturers in the Focus of European Authorities →