Regulators in the USA has approved a long-acting release of Novartis’ Signifor as a treatment for acromegaly.

The Food and Drug Administration has approved Signifor LAR (pasireotide) for the treatment of patients with acromegaly who have had an inadequate response to surgery or for whom the latter is not an option. The thumbs-up comes a month after the European Medicines Agency approved the drug, a next-generation somatostatin analogue administered intramuscularly once-monthly.

Pasireotide (SOM230, trade name Signifor[1]) is an orphan drug approved in the U.S. and Europe for the treatment of Cushing’s disease in patients who fail or are ineligible for surgical therapy.[2][3] It was developed by Novartis. Pasireotide is a somatostatinanalog which has a 40-fold increased affinity to somatostatin receptor 5 than other somatostatin analogs.

The drug showed therapeutical potential in a recent study (PASPORT-CUSHINGS B2305) where 162 patients were treated with either 2x 600 µg or 2x 900 µg pasireotide s.c. daily.[4] The effectiveness of the treatment was checked by the UFC-value (urinary free cortisol) after six months of treatment. The mean reduction of UFC after six months was 47.9%, which also lead to amelioration of clinical symptoms such as blood pressure, cholesterol value, and weight loss.[5]

SIGNIFOR (pasireotide diaspartate) injection is prepared as a sterile solution of pasireotide diaspartate in a tartaric acid buffer for administration by subcutaneous injection. SIGNIFOR is a somatostatin analog. Pasireotide diaspartate, chemically known as (2-Aminoethyl) carbamic acid (2R,5S,8S,11S,14R,17S,19aS)-11-(4-aminobutyl)-5-benzyl-8-(4-benzyloxybenzyl)-14-(1H-indol-3ylmethyl)-4,7,10,13,16,19-hexaoxo-17-phenyloctadecahydro-3a,6,9,12,15,18hexaazacyclopentacyclooctadecen-2-yl ester, di[(S)-2-aminosuccinic acid] salt, is a cyclohexapeptide with pharmacologic properties mimicking those of the natural hormone somatostatin.

The molecular formula of pasireotide diaspartate is C58H66N10O9 • 2C4H7NO4 and the molecular weight is 1313.41. The structural formula is:

SIGNIFOR is supplied as a sterile solution in a single-dose, 1 mL colorless glass ampule containing pasireotide in 0.3 mg/mL, 0.6 mg/mL, or 0.9 mg/mL strengths for subcutaneous injection.

Pasireotide is a multiligand somatostatin analogue with high binding affinity to somatostatin receptors sst1, sst2, sst3 and sst5. Novartis Oncology, a division of Novartis, filed for approval in the E.U. for the treatment of Cushing’s syndrome in 2010. A positive opinion was granted in 2011 and final approval was obtained in 2012. The E.U.’s first launch took place in Germany in June 2012. Also in 2011, Novartis filed an NDA in the U.S. seeking approval of the compound for the treatment of Cushing’s syndrome; however, the application was withdrawn the same year due to an issue related to chemistry, manufacturing and controls. In November 2012, the product was recommended for approval in the U.S. for Cushing’s syndrome. In December 2012, final FDA approval was granted. Phase III clinical trials are ongoing in Japan for this indication. In 2014, the product was approved in the E.U and the U.S. for the treatment of adult patients with acromegaly for whom surgery is not an option or has not been curative and who are inadequately controlled on treatment with a first-generation somatostatin analogue (SSA).

L-hydroxyproline methylester hydrochloride is reacted with Fmoc-OSu in aqueous 1.0 N sodium carbonate/THF at room temperature. After completion of the reaction, Fmoc-Pro(4- OH)-OMe is isolated by precipitation. Fmoc-Pro(4-OH)-OMe is then added dropwise into a solution of trisphosgene (0.6 eq.) in THF to give a chlorocarbonate intermediate. After 1 h dimethylaminopyridine (1.0 eq.) and N-Boc-diaminoethane (6.0 eq.) are added and the reaction is stirred at room temperature. After completion of the reaction, the solvent is removed in vacuo and the resulting Fmoc-Pro(4-OCO-NH-CH2-CH2-NH-Boc)-OMe is extracted from a two phase system of ethyl acetate/0.1 M HCI to give crude product (MH+ = 554) which is purified by crystallization from ethyl acetate. The methyl ester is then cleaved to the free acid by treatment with 1 N NaOH in dioxane/water and the product Fmoc-Pro(4-OCO-NH-CH2-CH2-NH-Boc)-OH is purified on silica gel, [(M+Na)]+= 562).

b) H-Phe-Pro(4-OCO-NH-CH2-CH2-NH-Boc)-Phg-DTrp(Boc)-Lys(Boc)-Tyr(Bzl)-OH Commercially available Fmoc-Tyr(Bzl)-O-CH2-Ph(3-OCH3)-O-CH2-Polystyrene resin (SASRIN-resin, 2.4 mM) is used as starting material and carried through a standard protocol consisting of repetitive cycles of Nα-deprotection (Piperidine/DMF, 2:8), repeated washings with DMF and coupling (DIPCI: 4.8 mM/HOBT: 6mM, DMF). The following amino acid- derivatives are sequentially coupled: Fmoc-Lys(Boc)-OH, Fmoc-DTrp(Boc)-OH, Fmoc-Phg- OH, Fmoc-Pro(4-OCO-NH-CH2-CH2-NH-Boc)-OH, Fmoc-Phe-OH. Couplings (2 eq. amino acids) are continued or repeated until completion, i.e. until complete disappearance of residual amino groups which is monitored by a negative ‘Kaiser* Ninhydrin test. Before cleavage of the completely assembled protected linear peptide from its resin support the Nα-Fmoc protection from the last residue is removed.

c) H-Phe-Pro(4-OCO-NH-CH2-CH2-NH-Boc)-Phg-DTrp(Boc)-Lys(Boc)-Tyr(Bzl)-OH After washings with CH2CI2) the peptide-resin is transferred into a column or a stirred suction filter and the peptide fragment is cleaved and eluted with a short treatment with 2% TFA in CH2CI2 within 1 h. The eluate is immediately neutralized with a saturated NaHCO3 solution. The organic solution is separated and evaporated and the side chain protected precursor (MH+ = 1366) is cyclized without further purification.

d) cyclo[-Pro(4-OCO-NH-CH2-CH2-NH2)-Phg-DT -Lys-Tyr(Bzl)-Phe-], trifluoroacetate The above linear fragment is dissolved in DMF (4 mM), cooled to minus 5°C and treated with 2 eq. DIPEA then 1.5 eq. of DPPA and stirred until completion (ca. 20h) at 0-4°C. The solvent was almost completely removed in vacuo; the concentrate is diluted with ethyl acetate, washed with NaHCO3, water, dried and evaporated in vacuo.

For deprotection the residue is dissolved at 0°C in TFA H2O 95:5 (ca.50 mM) and stirred in the cold for 30 min. The product is then precipitated with ether containing ca. 10 eq. HCI, filtered, washed with ether and dried. In order to completely decompose remaining Indole-N carbaminic acid the product is dissolved in 5% AcOH and lyophilized after 15 h at ca. 5°C. Preparative RP-HPLC is carried out on a C-18 10 μm STAGROMA column (5-25 cm) using a gradient of 0.5% TFA to 0.5% TFA in 70% acetonitrile. Fractions containing the pure title compound are combined, diluted with water and lyophilized. The lyophilisate is dissolved in water followed by precipitation with 10% Na2CO3 in water. The solid free base is filtered of, washed with water and dried in vacuum at room temperature. The resulting white powder is directly used for the different salts.

Conversion to the mono- or di-aspartate is obtained by reacting 1 equivalent of the compound of Example 1 with 1 or 2 equivalent of aspartic acid in a mixture of acetonitrile/water 1 :3. The resulting mixture is frozen and lyophilized. The di-aspartate may also be obtained by dissolving the compound of Example 1 in water/acetonitrile 4:1, filtering, loading on a an ion-exchange resin, e.g. BioRad AG4X4 column, and eluting with water/acetonitrile 4:1. The eluate is concentrated, frozen and lyophilized. [ ]D 20= -47.5°, c= 2.5mg/ml in methanol 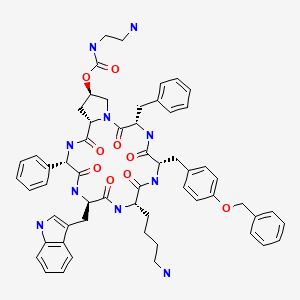 5.1.3.2. Cyclization, Deprotection, and Purification of Cyclo[(diaminoethylcarbamoyl)-HyPro-Phg-d-Trp-Lys-Tyr(Bzl)-Phe] (25). For cyclization, the above linear fragment was dissolved in DMF to a concentration of 4 mM, cooled to −5 °C, treated with 2 equiv of DIPEA and then 1.5 equiv of DPPA, and stirred at 0−4 °C until completion (ca. 20 h). The solvent was almost completely removed in vacuo. The concentrate was diluted with ethyl acetate, washed with NaHCO3 and water, dried, and evaporated in vacuo. The protected cyclized product was obtained in good yield.
For complete deprotection, the residue was dissolved at 0 °C in TFA/H2O, 95:5 (ca. 50 mM), and the mixture was stirred in the cold for 30 min. The product was then precipitated with ether containing ca. 10 equiv of HCl, filtered, washed with ether, and dried. To completely decompose the remaining indole-N carbaminic acid, the product was dissolved in 5% AcOH and lyophilized after 15 h at ca. 5 °C. Analytical RP-HPLC indicated a purity of 75% for the crude product.Preparative HPLC purification afforded 25:  3.1 g, 20% yield, purity 98%, RtI = 10.70, RtII = 10.20, RtIV = 3.90, HRMS 1047.51 (calcd 1047.5014).
Table 2.  1H and 13C NMR Assignments of SOM230, Using Numbering Scheme in NMR Assignment