Surotomycin is an investigational oral antibiotic. This antibiotic is under investigation for the treatment of life-threatening Diarrhea, commonly caused by the bacteria Clostridium difficile.[1]

Surotomycin is an antibacterial lipopeptide discovered by Cubist scientists in our research laboratories in Lexington, Massachusetts. Surotomycin is both bactericidal against Clostridium difficile and more potent than vancomycin in vitro. Surotomycin stays at the site of infection in the bowel, with minimal systemic absorption and it does not interfere with normal bowel flora. Based on its features and its preclinical safety profile, Cubist filed an Investigational New Drug (IND) Application for surotomycin in December 2008.

Following safety and pharmacokinetic studies in healthy human volunteers, Cubist began a Phase 2 study in April 2010 to assess the safety and efficacy of surotomycin in patients with CDAD, in particular to assess its ability to reduce relapse rates. In this trial of 209 patients, two different doses of surotomycin were studied and compared with oral vancomycin. The higher dose demonstrated a high clinical cure rate as evidenced by resolution of diarrhea, comparable to oral vancomycin. The most interesting results in this study, however, relate to recurrence rates. The percent of patients who had an initial response to treatment but who subsequently had a recurrence or relapse was 36 percent in the oral vancomycin arm and was 17 percent in the surotomycin 250mg treatment group — about a 50% reduction in relapse rate, which was statistically significant. In this trial, 32% of patients were infected with the hypervirulent NAP-1 strain of C. difficile. The clinical response rate in the subset of patients infected with the NAP-1 strain was comparable across the surotomycin and oral vancomycin groups. Though not statistically significant, there was a modest reduction in the relapse rates in the subset of surotomycin patients infected with NAP-1 strains.

The ability to reduce relapses is important to both patients and health care providers. In the Phase 2 study we assessed the impact of surotomycin and oral vancomycin on normal bowel flora. Treatment with surotomycin had a very minimal impact on levels of Bacteroides, a key normal bowel bacterial species, compared to oral vancomycin which resulted in a marked depletion of stool levels of these bacteria during treatment. Why does this matter? The reason is — bowel flora like Bacteroides are critical in providing a competitive environment in the bowel that prevents C. difficile overgrowth. We believe that it is this difference in impact on normal bowel flora that helps explain the differences seen in recurrence rates following treatment with Surotomycin versus oral vancomycin.

Surotomycin’s Phase 3 program includes two identical global, randomized, double-blind, active-controlled, multi-center trials. The primary objective is to demonstrate non-inferiority of surotomycin versus the comparator, oral vancomycin, in clinical response at the end of treatment in adult subjects with CDAD, using a non-inferiority margin of 10%. We also have designed this trial to allow us to demonstrate that sustained clinical response to surotomycin at the end of the study is superior to oral vancomycin. Also, we will fully evaluate the safety of surotomycin in the study subjects.

In late 2012 Cubist received from the FDA a Qualified Infectious Disease Product (QIDP) designation for surotomycin. Additionally, in early 2013 Cubist was granted Fast track status for surotomycin. The QIDP designation and subsequent granting of Fast Track status was made possible by the GAIN Act, Title VIII (Sections 801 through 806) of the Food and Drug Administration Safety and Innovation Act. The GAIN Act provides pharmaceutical and biotechnology companies with incentives to develop new antibacterial and antifungal drugs for the treatment of life-threatening infectious diseases caused by drug resistant pathogens. Qualifying pathogens are defined by the GAIN Act to include multi-drug resistant Gram-negative bacteria, including Pseudomonas, Acinetobacter, Klebsiella, and Escherichia coli species; resistant Gram-positive pathogens, including methicillin-resistant Staphylococcus aureus (MRSA), vancomycin-resistant Staphylococcus aureus and vancomycin-resistant Enterococcus; multi-drug resistant tuberculosis; and Clostridium difficile.

CDAD is a disease caused by an overgrowth of, and subsequent toxin production by, C. difficile, a resident anaerobic spore-forming Gram-positive bacterium of the lower gastrointestinal tract. This overgrowth is caused by the use of antibiotics for the treatment of common community and hospital acquired infections (HAIs). Although they treat the underlying infection, many antibiotics disrupt the natural gut flora and allow C. difficile to proliferate. C. difficile produces enterotoxin and cytotoxin, which can lead to severe diarrhea, sepsis and even death. While most types of HAIs are declining, the infection caused by C. difficile remains at historically high levels. According to the latest data from the Centers for Disease Control, C. difficile continues to be the leading cause of death associated with gastroenteritis in the US. For CDAD alone, there was more than a five-fold increase in deaths between 1999 and 2007. C. difficile causes diarrhea linked to 14,000 American deaths each year. About 25% of C. difficile infections first show symptoms in hospital patients; 75% first show in nursing home patients or in people recently cared for in doctors’ offices and clinics. C. difficile infections cost at least $1 billion in extra health care costs annually. 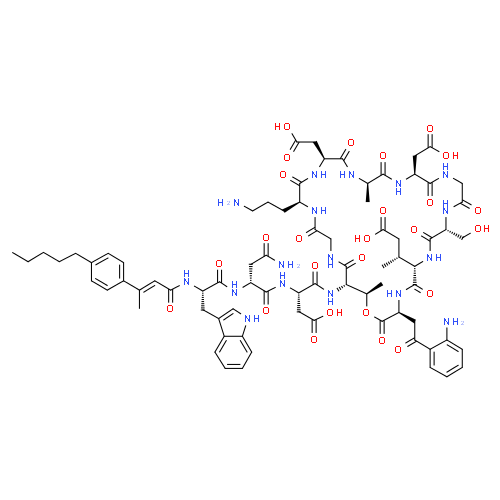 CB-183,315 is a cyclic lipopeptide antibiotic currently in Phase III clinical trials for the treatment of Clostridium difficile-associated disease (CDAD). As disclosed in International Patent Application WO 2010/075215, herein incorporated by reference in its entirety, CB-183,315 has antibacterial activity against a broad spectrum of bacteria, including drug-resistant bacteria and C. difficile. Further, the CB-183,315 exhibits bacteriacidal activity.

CB-183,315 (Figure 1) can be made by the deacylation of BOC-protected daptomycin, followed by acylation and deprotection as described in International Patent Application WO 2010/075215.

Oxalyl chloride (3.2 mL, 36.60 mmol) and DMF (50 μl_) were added drop wise to a solution of compound 1003 (5.0 g, 21.52 mmol) in dichloromethane (100 mL) at 0 0C. The reaction solution was warmed up to room temperature and stirred for 4 hours. The reaction mixture was concentrated in vacuum and the residue was dried under hi-vacuum for 3 hours. The crude product was used in the next step without further purification.

Deacylated BOC-protected daptomycin (3.5Og, 2.23 mmol) and sodium bicarbonate (1.13 g, 61.0 mmol) were dissolved in THF (130 mL) and water (50 mL). The deacylated BOC-protected daptomycin sodium bicarbonate solution was cooled to 0 0C. and a solution of compound 1004 (1.96 g, 7.82 mmol) in THF (20 mL) was then introduced. The reaction mixture was warmed to room temperature and stirred for 4 hours. The mixture was concentrated in vacuum to remove THF. The remaining aqueous solution was loaded on a C18 flash chromatography column (35mηnχ 300mm, Bondesil HF C18 resin purchased from Varian). The column was first washed with water to remove salt and then with methanol to wash out product. Crude compound 1005 (3.46 g) was afforded as a white solid after removal of methanol. MS m/z 1780.8 (M + H)+.

TFA (10 ml_) was added to a solution of compound 1005 (3.46 g) in DCM (50 mL) at room temperature. The reaction mixture was stirred vigorously for 45 minutes and added slowly to vigorously stirring diethyl ether (100 mL). The resulting yellow precipitation was collected by filtration. The crude product was purified by Preparative HPLC to afford the TFA salt of compound 6 (0.75 g). MP carbonate resin (purchased from Biotage) was added to the solution of compound 6 TFA salt (0.70 g, 0.39 mmol) in anhydrous methanol (30.0 mL). The mixture was stirred at room temperature for 4 hours. The resins were removed by filtration and rinsed with methanol. The methanol solution was concentrated under vacuum to give product as off-white solid (408 mg). MS m/z 1680.7 (M + H)+.

The reaction mixture was washed with methyl terf-butyl ether (90 L then approximately 60 L then approximately 45 L then approximately 45 L) to remove 1 ,4-dioxane. The remaining solution (approximately 44 L) was adjusted to pH 2.69 with 2N sodium hydroxide (11.3 L) and water (53.4 L). This material was processed by Tangential Flow Filtration (TTF) with a 1 K membrane until the total volume was reduced to 54 L.Water (120 L) was added in two portions and the solution was concentrated to 52 L by continued TTF. The aqueous solution (30 L of 52 L) was purified by chromatography using the following protocol: The aqueous solution was brought to three times of its volume (30 L→90l_) with 20% IPA in aqueous ammonium acetate solution (50 mM). The diluted solution was applied to a 38 L HP20SS resin column at 1.5 L/min. The column was eluted with IPA solution in aqueous 50 mM ammonium acetate (25%→30%→35%, 60 L each concentration).

Fractions (approximately 11 L) were collected and analyzed by HPLC. The fractions with HPLC purity less than 80% were combined and purified again using the same method. The key fractions from both chromatographic separations (with HPLC purity >80%) were combined and acidified with concentrated HCI to pH 2-3. The resulting solution was desalted on an ion exchange column (HP20SS resin, 16 L) which was eluted with WFI (until conductivity = 4.8 μS) followed by IPA in WFI (36 L 10%→ 40 L 60%). The yellow band which was eluted with 60% IPA (approximately 19L) was collected, adjusted to pH 2-3 with concentrated HCI and lyophilized to yield 636.5 g of Compound 49 (HPLC purity of 87.0%). MS m/z 1680.7 (M + H)+.