Zafirlukast is an oral leukotriene receptor antagonist (LTRA) for the maintenance treatment of asthma, often used in conjunction with an inhaled steroid and/or long-acting bronchodilator. It is available as a tablet and is usually dosed twice daily. Another leukotriene receptor antagonist is montelukast (Singulair), taken once daily. Zileuton (Zyflo), also used in the treatment of asthma via its inhibition of 5-lipoxygenase, is taken four times per day.

Zafirlukast blocks the action of the cysteinyl leukotrienes on the CysLT1 receptors, thus reducing constriction of the airways, build-up of mucus in the lungs andinflammation of the breathing passages.

Zafirlukast is marketed by Astra Zeneca with the brand names Accolate, Accoleit, and Vanticon. It was the first LTRA to be marketed in the USA and is now approved in over 60 countries, including the UK, Japan, Taiwan, Italy, Spain, Canada, Brazil, China and Turkey

A letter was submitted to the FDA by Zeneca Pharmaceuticals on July 22, 1997, notifying them of a change in product labeling that includes the following potential reaction in patients undergoing a dosage reduction of oral steroids who are currently taking zafirlukast:

PRECAUTIONS-Eosinophilic Conditions: The reduction of the oral steroid dose, in some patients on ACCOLATE therapy, has been followed in rare cases by the occurrence of eosinophilia, vasculitic rash, worsening pulmonary symptoms, cardiac complications, and/or neuropathy sometimes presenting as Churg–Strauss syndrome, a systemic eosinophilic vasculitis. Although a causal relationship with ACCOLATE has not been established, caution is required when oral steroid reduction is being considered.1

Zafirlukast is a synthetic, selective peptide leukotriene receptor antagonist (LTRA), with the chemical name 4(5-cyclopentyloxy-carbonylamino-1-methyl-indol-3ylmethyl)-3-methoxy-N-o-tolylsulfonylbenzamide. The molecular weight of zafirlukast is 575.7 and the structural formula is:

Zafirlukast, a fine white to pale yellow amorphous powder, is practically insoluble in water. It is slightly soluble in methanol and freely soluble in tetrahydrofuran, dimethylsulfoxide, and acetone.The empirical formula is: C31H33N3O6S

Alkyl (l-alkylindol-3-ylmethyl)benzoates of formula [lb] are useful as chemical intermediates in the pharmaceutical industry.

in the presence of an equivalent quantity of silver(I) oxide,

(b) isolating the alkyl (indol-3-ylmethyl)benzoates of formula [4] from the reaction mixture obtained in step (a) above,
(c) reacting the compound [4] with an alkylating agent of formula [6],

The above process has serious disadvantages in the isolation of the product [4] in step (b) which is due to the fact that alkylation of indole, that is unsubstituted at positions 1-, 2- and 3-, at the 3-position, is accompanied by the undesired process of poly alkylation, to form polysubstituted indoles of formula [7] and/or formula [8] :

while at the same time some quantity of the starting unreacted indole remains in the reaction mixture. Most common methods for the separation of alkyl (indol-3-ylmethyl)benzoate of formula [4] from by-products of polyalkylation and starting unreacted indole, which are all covalent compounds with similar physical properties, include column chromatography that is an unpractical method for industrial scale applications.

Formula (I) compound for the synthesis of an important intermediate of zafirlukast.Reported in the patent EP199543 synthesized compound (I) of the conventional method, the following formula:

In this method, Intermediate A and 5 – nitro-indole silver oxide in the presence of a catalyst, for docking composite formula (I) compound. Reported only 45% of the reaction yield, the reaction is difficult to complete the reaction and post-treatment using chromatographic methods, resulting in product purification more difficult. And the use of more expensive silver oxide catalysts, high cost.

W00246153 reported a catalyst for the above reaction to zinc bromide, Compound (I), after treatment of the compound (I) with sodium hydroxide hydrolysis of the intermediate (B), separating the product and raw materials purification products.

The method reported in the literature a yield of 60%, but the actual operation is repeated only about 30% yield, and the operation is complicated, cumbersome and costly.

zaafirlukast is a selective and competitive receptor antagonist of leukotriene D4 and E4 (LTD4 and LTE4), components of slow-reacting substance of anaphylaxis (SRSA). Cysteinyl leukotriene production and receptor occupation have been correlated with the pathophysiology of asthma, including airway edema, smooth muscle constriction, and altered cellular activity associated with the inflammatory process, which contribute to the signs and symptoms of asthma.

The cysteinyl leukotrienes (LTC4 LTD4, LTE4) are the products of arachidonic acid metabolism and are various cells, including mast cells and eosinophills, these eicosinoids bind to cysteinyl leukotriene (CysLT) receptors. The CysLT type-1 (CysLT1) receptor is found in human airway and other pro-inflammatory cells. CysLTs have been correlated with the pathophysiology of asthma.

Zafirlukast is a synthetic, selective peptide leukotriene receptor antagonist (LTRA), useful for the treatment of asthma and is commercially available in products sold under the brand name ACCOLATE™ as 10 and 20 mg tablets for oral administration. ACCOLATE™ is indicated for the prophylaxis and treatment of asthma in adults and children 5 years of age and older.

The greatest prevalence of asthma is in preschool children; however, the clinical utility of asthma therapy for this age group is limited by a narrow therapeutic index, long-term tolerability, and frequency and/or difficulty of administration. Asthma treatment requires an immediate perceivable effect. Inhalation therapy is a very common therapy prescribed for young children; inhalation therapy has the disadvantage of high dose variability.

In comparison, the known process for the preparation of zafirlukast described in J. Med. Chem., v. 33, 1781 (1990) and U.S. Pat. No. 4,859,692 involves separation steps, e.g. column chromatography, that are not practical for industrial scale applications. The known process is summarized in Scheme 3:

An Improved and Scalable Process for Zafirlukast: An Asthma Drug

added info Asthma is a disease that causes swelling and narrowing the airways of the lungs. Airways are air carriers to and from lungs. Swollen and narrower airways affect the air flow to and from the lungs and this lead to tightness of chest, wheezing, shortness of breath and cough. These symptoms are often occurs in early morning and in night. Asthma is caused by genetic and environmental factors, it was not curable completely but this can be controlled with good medical care. Leukotriene antagonists also known as leukast are the medicaments that are used to reduce leukotrienes, which are produced by several types of cells and causes inflammation in asthma and bronchitis. Leukotriene antagonists that are available in market are Montelukast, Zafirlukast and Pranlukast. Zafirlukast is the first leukast compound approved for management of Asthma. US FDA approved zafirlukast in the form of 10 mg and 20 mg tablet with the brand name of Accolate®.1 Subsequently this was approved and launched by innovator in few other countries. There are many synthetic routes for the preparation of Zafirlukast 4 is well documented in literature. Some of the key approaches are discussed here under. Scientists from ICI Americas Inc2 have reported process for the synthesis of 4, which starts with esterification of 3-methoxy-4-methyl benzoic acid 53 using methanol in presence of acetyl chloride PRODUCT PATENT ROUTE Allylic bromination of methyl ester 54 using bromine in presence of CCl4 resulted bromo compound 55, which was reacted with 5-nitro indole 124 using silver oxide as catalyst to obtain condensed compound 125. N-methylation of 125 utilizing methyl iodide in presence of NaH afforded N-methyl indole derivative 57. Thus obtained 57 was subjected to reduction using palladium carbon (Pd/C) in methanol followed by reacted with cyclopentyl chloroformate to obtain compound 59. Hydrolysis of 59 using LiOH.H2O subsequently reaction with o-toluene sulfonamide (OTSA) in presence of 1-[3-(dimethylamino)propyl]-3-ethyl carbodiimide hydrochloride (DMAPEC) and DMAP furnished zafirlukast 4. Matassa et al3 also reported similar procedure for the synthesis of Zafirlukast 4. 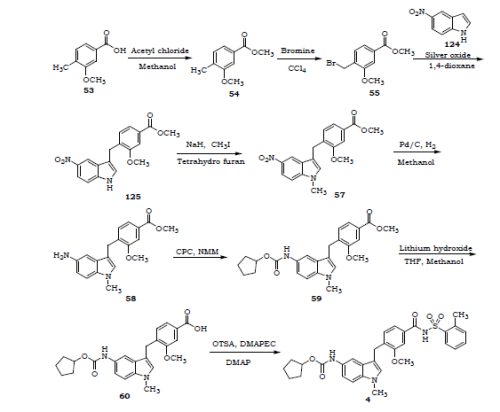 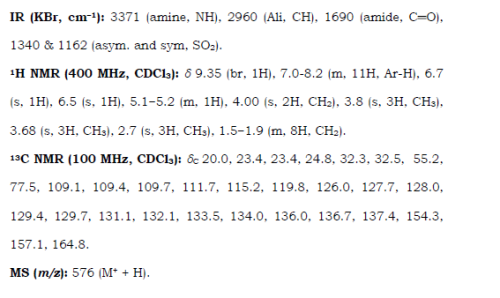 By DR ANTHONY MELVIN CRASTO Ph.D in SPOTLIGHT on December 3, 2013.
← Rare Disease Awareness Day: Phenylketonuria (PKU) The Impact of New Technologies on the Science of Clinical Care and Drug Development →