VAL-083 is a bi-functional alkylating agent; inhibit U251 and SF188 cell growth in monolayer better than TMZ and caused apoptosis

VAL-083 is a bi-functional alkylating agent, with potential antineoplastic activity. Upon administration, VAL-083 crosses the blood brain barrier (BBB) and appears to be selective for tumor cells. This agent alkylates and crosslinks DNA which ultimately leads to a reduction in cancer cell proliferation. In addition, VAL-083 does not show cross-resistance to other conventional chemotherapeutic agents and has a long half-life in the brain. Check for active clinical trials or closed clinical trials using this agent

Currently, VAL-083 is approved in China to treat chronic myelogenous leukemia and lung cancer, while the drug has also secured orphan drug designation in Europe and the US to treat malignant gliomas.

VAL-083 is a BI-Functional alkylating agent; INHIBIT U251 and SF188 Cell Growth in monolayer Better than TMZ and Caused apoptosis. IC50 Value : 5 uM (INHIBIT U251, SF188, T98G Cell Growth in monolayer after 72h) [1]. in vitro :.. VAL-083 INHIBITED U251 and SF188 Cell Growth in monolayer and as neurospheres Better than TMZ and Caused apoptosis after 72 hr Formation Assay In the colony, VAL-083 (5 uM) SF188 Growth suppressed by about 95% are T98G cells classically TMZ-resistant and express MGMT, but VAL-083 inhibited their growth in monolayer after 72 hr in a dose-dependent manner (IC50, 5 uM). VAL-083 also inhibited the growth of CSCs (BT74, GBM4, and GBM8) . by 80-100% in neurosphere self-Renewal assays Conversely, there was minimal normal Effect on Human Neural stem cells [1]. in Vivo : Clinical Trial : Safety Study of VAL-083 in Patients With Recurrent Malignant glioma or Secondary Progressive Brain Tumor. Phase 1 / Phase 2

VAL-083 has demonstrated activity in cyclophosphamide, BCNU and phenylanine mustard resistant cell lines and no evidence of cross-resistance has been encountered in published clinical studies. Based on the presumed alkylating functionality of VAL-083, published literature suggests that DNA repair mechanisms associated with Temodar and nitrosourea resistance, such as 06-methylguanine methyltransferace (MGMT), may not confer resistance to VAL-083.  VAL-083 readily crosses the blood brain barrier where it maintains a long half-life in comparison to the plasma. Published preclinical and clinical research demonstrates that VAL-083 is selective for brain tumor tissue.  VAL-083 has been assessed in multiple studies as chemotherapy in the treatment of newly diagnosed and recurrent brain tumors. In published clinical studies, VAL-083 has previously been shown to have a statistically significant impact on median survival in high grade gliomas when combined with radiation vs. radiation alone. The main dose-limiting toxicity related to the administration of VAL-083 in previous clinical studies was myelosuppression

Glioblastoma is the most common form of primary brain cancer

DelMar Pharmaceuticals has collaborated with the University of Texas MD Anderson Cancer Center (MD Anderson) to speed up the clinical development of its VAL-083 anti-cancer drug.

VAL-083 is a small-molecule chemotherapeutic designed to treat glioblastoma multiforme (GBM), the most common and deadly cancer that starts within the brain.

Under the deal, MD Anderson will begin a new Phase II clinical trial with VAL-083 in patients with GBM at first recurrence / progression, prior to Avastin (bevacizumab) exposure.

During the trial, eligible patients will have recurrent GBM characterised by a high expression of MGMT, the DNA repair enzyme implicated in drug-resistance, and poor patient outcomes following current front-line chemotherapy.

” … Our research shows that VAL-083 may offer advantages over currently available chemotherapies in a number of tumour types.”

The company noted that MGMT promoter methylation status will be used as a validated biomarker for enrollment and tumours must exhibit an unmethylated MGMT promoter for patients to be eligible for the trial.

DelMar chairman and CEO Jeffrey Bacha said: “The progress we continue to make with our research shows that VAL-083 may offer advantages over currently available chemotherapies in a number of tumour types.

“This collaboration will allow us to leverage world-class clinical and research expertise and a large patient population from MD Anderson as we extend and accelerate our clinical focus to include GBM patients, following first recurrence of their disease.

“We believe that VAL-083’s unique cytotoxic mechanism offers promise for GBM patients across the continuum of care as a potential superior alternative to currently available cytotoxic chemotherapies, especially for patients whose tumours exhibit a high-expression of MGMT.”

The deal will see DelMar work with the scientists and clinicians at MD Anderson to accelerate its research in order to transform the treatment of patients whose cancers fail or are unlikely to respond to existing treatments.

In more than 40 clinical trials, VAL-083 showed clinical activity against several cancers including lung, brain, cervical, ovarian tumours and leukemia both as a single-agent and in combination with other treatments.

Dianhydrogalactitol (DAG or dianhydrodulcitol) can be synthesized from dulcitol which can be produced from natural sources (such as Maytenus confertiflora) or commercial sources.The structure of DAG is given below as Formula (I). 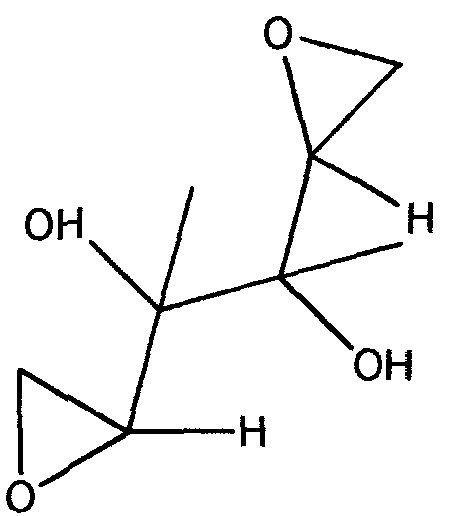 One method for the preparation of dulcitol from Maytenus confertiflora is as follows: (1) The Maytenus confertiflora plant is soaked in diluted ethanol (50-80%) for about 24 hours, and the soaking solution is collected. (2) The soaking step is repeated, and all soaking solutions are combined. (3) The solvent is removed by heating under reduced pressure. (4) The concentrated solution is allowed to settle overnight and the clear supernatant is collected. (5) Chloroform is used to extract the supernatant. The chloroform is then removed under heat and reduced pressure. (6) The residue is then dissolved in hot methanol and cooled to allow crystallization. (7) The collected crystals of dulcitol are filtered and dried under reduced pressure. The purified material is dulcitol, contained in the original Maytenus confertiflora plant at a concentration of about 0.1% (1/1000).

DAG can be prepared by two general synthetic routes as described below:

However, the intermediate of Route 1, 1,6-ditosy)dulcitol, was prepared with low yield (~36%), and the synthesis of 1,6-ditosyldulcitol was poorly reproducible. Therefore, the second route process was developed, involving two major steps: (1) preparation of dibromodulcitol from dulcitol; and (2) preparation of dianhydrodulcitol from dibromodulcitol.

Dibromodulcitol is prepared from dulcitol as follows: (1) With an aqueous HBr solution of approximately 45% HBr concentration, increase the HBr concentration to about 70% by reacting phosphorus with bromine in concentrated HBr in an autoclave. Cool the solution to 0° C. The reaction is:

2P+3Br2→2PBr3+H20→HBr†+H3P04. (2) Add the dulcitol to the concentrated HBr solution and reflux at 80° C to complete the reaction. (3) Cool the solution and pour the mixture onto ice water. Dibromodulcitol is purified through recrystallization.

The results for the preparation of dibromodulcitol (DBD) are shown in Table 1, below.

For the preparation of DAG from DBD, DBD was poorly dissolved in methanol and ethanol at 40° C (different from what was described in United States PATENT

Patent No. 3,993,781 to Horvath nee Lengyel et al., incorporated herein by this reference). At refluxing, DBD was dissolved but TLC showed that new impurities formed that were difficult to remove from DBD.

The DBD was reacted with potassium carbonate to convert the DBD to dianhydrogalactitol.

The results are shown in Table 2, below.

In the scale-up development, it was found the crude yield dropped significantly. It is unclear if DAG could be azeotropic with BuOH. It was confirmed that t-BuOH is essential to the reaction. Using MeOH as solvent would result in many impurities as shown spots on TLC. However, an improved purification method was developed by using a slurry with ethyl ether, which could provide DAG with good purity. This was developed after a number of failed attempts at recrystallization of DAG.

Bromination of dulcitol with HBr at 80°C gives dibromodulcitol , which upon epoxidation in the presence of K2CO3 in t-BuOH or NaOH in H2O  or in the presence of ion exchange resin Varion AD (OH) (4) affords the target dianhydrogalactitol . 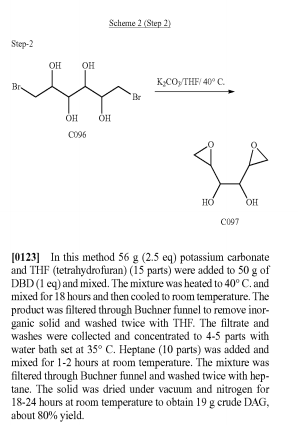 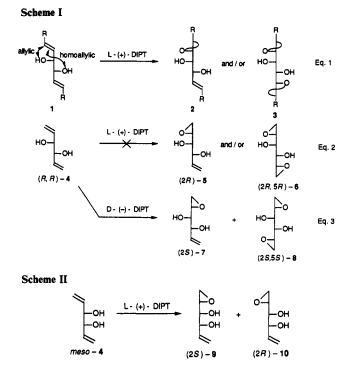 Currently, VAL-083 is approved in China to treat chronic myelogenous leukemia and lung cancer, while the drug has also secured orphan drug designation in Europe and the US to treat malignant gliomas.