Veliparib (ABT-888)[1] is a potential anti-cancer drug acting as a PARP inhibitor. It kills cancer cells by blocking a protein called PARP, thereby preventing the repair of DNA or genetic damage in cancer cells and possibly making them more susceptible to anticancer treatments. Veliparib may make whole brain radiation treatment work more effectively against brain metastases from NSCLC.

AbbVie, which was spun off from Abbott Laboratories in early 2013, is currently looking to buy Irish drug maker Shire for $46 billion. The proposed deal follows Pfizer’s failed $120 billion attempt to buy AstraZeneca. Humira, AbbVie’s rheumatoid arthritis drug and the world’s top-selling drug last year, accounts for 60% of company revenue and is going off-patent in at the end of 2016.  The threat of growing competition for Humira may be a major motivation for AbbVie. 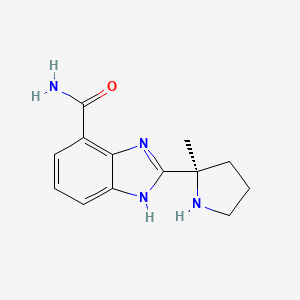 Numerous phase I clinical trials are in progress.[4]

A phase I/II clinical trial for use with/out doxorubicin (for Metastatic or Unresectable Solid Tumors or Non-Hodgkin Lymphoma) started in 2008 and is due to complete in 2010.[5] Results (inc MTD) with topotecan.[6]

A phase II clinical trial for metastatic melanoma has started recruiting.[7] Due to end Dec 2011.

A phase II clinical trial for metastatic breast cancer has started recruiting.[8] Due to end Nov 2011.

A phase II clinical trial for add-on to Radiation Therapy for Patients with Brain Metastases from Non-Small Cell Lung Cancer.

It was included in the I-SPY2 breast cancer trial,[9] and there are encouraging data from that study [10]

A phase I clinical trial for prostate cancer in men who carry the BRCA mutation is underway and is now recruiting (as of May 2013).[11]

A solution of Example 1B (13.7 g, 52 mmol) in a mixture of pyridine (60 mL) and DMF (60 mL) was treated with 1,1′-carbonyldiimidazole (9.27 g, 57.2 mmol) at 45° C. for 2 h. 2,3-Diamino-benzamide dihydrochloride (11.66 g, 52 mmol), which was synthesized as described in previous patent application WO0026192, was added and the mixture was stirred at rt overnight. After concentration under vacuum, the residue was partitioned between ethyl acetate and diluted sodium bicarbonate aqueous solution. The slightly yellow solid material was collected by filtration, washed with water and ethyl acetate, and dried to give Example 1C (16.26 g). Extraction of the aqueous phase with ethyl acetate followed by concentration, filtration and water-EtOAc wash, provided additional 1.03 g of Example 1C. Combined yield: 84%. MS (APCI) m/z 397 (M+H)+.

A suspension of Example 1C (17.28 g, 43.6 mmol) in acetic acid (180 mL) was heated under reflux for 2 h. After cooling, the solution was concentrated and the residual oil was partitioned between ethyl acetate and sodium bicarbonate aqueous solution. The organic phase was washed with water and concentrated. The residue was purified by flash column chromatography (silica gel, 3-15% CH3OH in 2:1 EtOAc/hexane) to provide Example 1D (16.42 g, Yield: 99%).

EXAMPLE 1 Preparation of ABT-888 Crystalline Form 1 A mixture of ABT-888 dihydrochloride (10 g) was stirred in saturated potassium bicarbonate (50 mL) and n-butanol (50 mL) until the ABT-888 dihydrochloride completely dissolved. The aqueous layer was extracted with a second portion of n-butanol then discarded. The extracts were combined, washed with 15% sodium chloride solution (50 mL) and concentrated. The concentrate was chase distilled three times with heptane (50 mL),dissolved in refluxing 2-propanol (45 mL) and filtered hot. The filtrate was cooled to ambient temperature with stirring over 18 hours, cooled to 0-50C, stirred for 1 hour, and filtered. The filtrant was washed with 2-propanol and dried in a vacuum oven at 45-500C with a slight nitrogen purge.

Preparation of ABT-888 Crystalline Form 2

A mixture of ABT-888 in methanol, in which the ABT-888 was completely dissolved, was concentrated at about 35 0C, and the concentrate was dried to a constant weight.

EXAMPLE 3 Preparation of ABT-888 Crystalline Form 1

Step 2: The reaction is run at 20 – 25 0C. One equivalent of sodium hydroxide is added, raising the pH to 2 – 3 with only a mild exotherm (100C observed with rapid addition of 1.0 equiv.). This generates a solution that remains clear for several days even when seeded with free base crystals. 3N NaOH (1.0 equiv., 1.25 kg / kg 15) is charged and the solution polish filtered into the crystallizer/ reactor.

Step 4: The slurry is mixed for NLT 15 min before sampling (typically 1 to 4 hours (2.5 mg/mL product in the supernatant)). The slurry is filtered at 200C and washed with 6 portions of water (1.0 kg / kg 15 each). Each wash was applied to the top of the cake and then pressured through. No mixing of the wetcake was done.

excellent PARP enzyme potency as well as single-digit nanomolar cellular potency. These efforts led to the identification of 3a (2-[(R)-2-methylpyrrolidin-2-yl]-1H-benzimidazole-4-carboxamide, ABT-888), currently in human phase I clinical trials. Compound 3a displayed excellent potency against both the PARP-1 and PARP-2 enzymes with a Ki of 5 nM and in a C41 whole cell assay with an EC50 of 2 nM. In addition, 3a is aqueous soluble, orally bioavailable across multiple species, and demonstrated good in vivo efficacy in a B16F10 subcutaneous murine melanoma model in combination with temozolomide (TMZ) and in an MX-1 breast cancer xenograft model in combination with either carboplatin or cyclophosphamide.