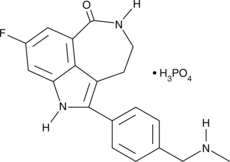 Rucaparib (CO-338; formerly known as PF 01367338 and AG 14699) is a small molecule inhibitor of poly-adenosine disphosphate (ADP) ribose polymerase(PARP) being developed for antitumor therapy as monotherapy and in combination with a variety of chemotherapeutic agents as a chemosensitizer. The safety and efficacy of IV rucaparib administered in combination with chemotherapy has been evaluated in several Phase I and Phase II studies.

An oral formulation is the focus of current development efforts. Rucaparib is currently being investigated as monotherapy in patients with cancer associated with BRCA1 or BRCA2 mutations, and in combination with carboplatin in patients with advanced solid tumors. For this study, it is anticipated that rucaparib will promote cell death in the BRCA-deficient tumor cells of breast and ovarian cancer patients with evidence of a germline mutation, thereby limiting tumor progression and providing therapeutic benefit.

poly(ADP ribose) polymerase inhibition has been shown to potentiate the cytotoxicity of DNA damaging agents. A phase I study of rucaparib and temozolomide showed that full-dose temozolomide could be given during PARP inhibition. We report the results of a phase II study of intravenous rucaparib 12 mg/m(2) and oral temozolomide 200 mg/m(2) on days 1-5 every 28 days in patients with advanced metastatic melanoma.

Forty-six patients were recruited with 37 patients receiving at least 2 cycles and 17 patients at least 6 cycles. Myelosuppression occurred with 25 patients (54 %) requiring a 25 % dose reduction in temozolomide. The response rate was 17.4 %, median time to progression 3.5 months, median overall survival 9.9 months, and 36 % of patients were progression-free at 6 months.

This study showed that temozolomide (150-200 mg/m(2)/day) can safely be given with a PARP inhibitory dose of rucaparib, increasing progression-free survival over historical controls in metastatic melanoma patients.

Rucaparib (AG 014699) is a PARP inhibitor being investigated as a potential anti-cancer agent.

Rucaparib inhibits “the contraction of isolated vascular smooth muscle, including that from the tumours of cancer patients. It also reduces the migration of some cancer and normal cells in culture.”[1]

It can be taken orally in tablet form.[2]

As of November 2012 four clinical trials of rucaparib were recruiting patients.[5]