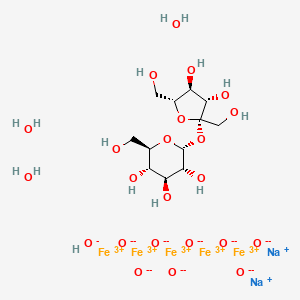 Iron saccharate (Sucroferric oxyhydroxide or Iron Sucrose) is used as a source of iron in patients with iron deficiency anemia with chronic kidney disease (CKD), including those who are undergoing dialysis (hemodialysis or peritoneal) and those who do not require dialysis. Due to less side effects than iron dextran, iron saccharate is more preferred in chronic kidney disease patients.

Indicated for the control of serum phosphorus levels in patients with chronic kidney disease on dialysis. 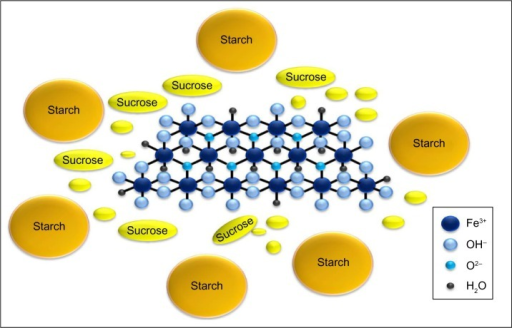 Sucroferric oxyhydroxide is a brown, amorphous powder. The drug substance is relatively poorly defined, so that the manufacturing process is particularly important. Sucroferric oxyhydroxide is prepared by basifying a ferric chloride solution, giving a polynuclear iron(III)-oxyhydroxide suspension which is mixed with potato and maize starches and sucrose. Vifor states that the sucrose stabilises the iron core and thus maintain the high phosphate adsorption capacity while the starches function as processing aids, but they are added simultaneously and the drug substance is probably a complex mixture of species.

The solubility of the active moiety, polynuclear iron oxyhydroxide, is evidently low in the gastrointestinal (GI) tract so that iron absorption is low. Aqueous solubility at different pH has been very poorly quantified. Vifor states that the “sucrose part is soluble in water, iron(III)-oxyhydroxide/starch mixture is practically insoluble in water.” While the iron oxide particle size is important in determining the phosphate binding, it is relatively difficult to directly measure. The sucrose/starch “wrapped” drug substance particle size is established and the process is controlled, but it does not correlate well with phosphate adsorption. Sucroferric oxyhydroxide cannot be controlled in the manner of a well-defined molecular drug and some variability between batches is likely. The drug substance specification includes a phosphate adsorption test. Vifor has tested the adsorption of a range of other in vivo chemical species to sucroferric oxyhydroxide and not identified any likely to be strongly bound, or affect phosphate binding, except for oxalate. Some drugs, however, do interact, for example alendronate is strongly absorbed (and the PI warnings in that context should be generalised to all bisphosphonates, not just identify the single drug in class studied)….https://www.tga.gov.au/sites/default/files/auspar-sucroferric-oxyhydroxide-150219.pdf

In a healthy person, normal serum phosphate levels are maintained by the regulation of dietary absorption, bone formation and resorption, equilibration with intracellular stores, and renal excretion.[2] When kidney function is impaired, phosphate excretion declines. Without specific treatment, hyperphosphataemia occurs almost universally, despite dietary phosphate restriction and conventional dialysis treatment.[2][3] In patients on dialysis, hyperphosphataemia is an independent risk factor for fractures, cardiovascular disease and mortality.[4][5] Abnormalities in phosphate metabolism such as hyperphosphatemia are included in the definition of the new chronic kidney disease–mineral and bone disorder (CKD-MBD).[5]

Structure and mechanism of action

Dietary phosphate binds strongly to sucroferric oxyhydroxide in the gastrointestinal (GI) tract. The bound phosphate is eliminated in the faeces and thereby prevented from absorption into the blood. As a consequence of the decreased dietary phosphate absorption, serum phosphorus concentrations are reduced.

Sucroferric oxyhydroxide is approved by the United States Food and Drug Administration (FDA) and the European Medicines Agency (EMA) for the control of serum phosphorus levels in patients with chronic kidney disease (CKD) on dialysis.[1][8]

The most frequently reported adverse drug reactions reported from trials were diarrhoea and discoloured faeces.[1][8] The vast majority of gastrointestinal adverse events occurred early during treatment and abated with time under continued dosing.[1]

Sucroferric oxyhydroxide binds phosphate under empty and full stomach conditions and across the physiologically relevant pH range of the GI tract.[7]

In a retrospective, real-world study, hyperphosphatemic peritoneal dialysis patients who were prescribed to switch to sucroferric oxyhydroxide from sevelamer, lanthanum carbonate, or calcium acetate had significant reductions in serum phosphorus levels, along with a 53% decrease in the prescribed daily pill burden.[16]

The US Food and Drug Administration has given the green light to Vifor Fresenius Medical Care Renal Pharma’s hyperphosphatemia drug Velphoro.

The approval for Velphoro (sucroferric oxyhydroxide), formerly known as PA21, is based on Phase III data demonstrated that the drug successfully controls the accumulation of phosphorus in the blood with the advantage of a much lower pill burden than the current standard of care in patients with chronic kidney disease on dialysis, namely Sanofi’s Renvela (sevelamer carbonate). read this at

Velphoro (PA21) receives US FDA approval for the treatment of hyperphosphatemia in Chronic Kidney Disease Patients on dialysis
Velphoro (sucroferric oxyhydroxide) has received US Food and Drug Administration (FDA) approval for the control of serum phosphorus levels in patients with Chronic Kidney Disease (CKD) on dialysis. Velphoro will be launched in the US by Fresenius Medical Care North America in 2014.

Velphoro (previously known as PA21) is an iron-based, calcium-free, chewable phosphate binder. US approval was based on a pivotal Phase III study, which met its primary and secondary endpoints. The study demonstrated that Velphoro&reg; successfully controls hyperphosphatemia with fewer pills than sevelamer carbonate, the current standard of care in patients with CKD on dialysis. The average daily dose to control hyperphosphatemia was 3.3 pills per day after 52 weeks.

Hyperphosphatemia, an abnormal elevation of phosphorus levels in the blood, is a common and serious condition in CKD patients on dialysis. Most dialysis patients are treated with phosphate binders. However, despite the availability of a number of different phosphate binders, up to 50% of patients depending on the region are still unable to achieve and maintain their target serum phosphorus levels. In some patients, noncompliance due to the high pill burden and poor tolerability appear to be key factors in the lack of control of serum phosphorus levels. On average, dialysis patients take approximately 19 pills per day with phosphate binders comprising approximately 50% of the total daily pill burden. The recommended starting dose of Velphoro is 3 tablets per day (1 tablet per meal).

Full results from the pivotal Phase III study involving more than 1,000 patients were presented at both the 50th ERA-EDTA (European Renal Association European Dialysis and Transplant Association) Congress in Istanbul, Turkey, in May 2013, and the American Society of Nephrology (ASN) Kidney Week in Atlanta, Georgia, in November 2013. Velphorowas shown to be a potent phosphate binder, with lower pill burden and a good safety profile.

Based on these data, Vifor Fresenius Medical Care Renal Pharma believes that Velphoro offers a new and effective therapeutic option for the control of serum phosphorus levels in patients with chronic kidney disease on dialysis.
The regulatory processes in Europe, Switzerland and Singapore are ongoing and decisions are expected in the first half 2014. Further submissions for approval are being prepared.

Hyperphosphatemia is associated with significant increase in morbidity and mortality, and may induce severe complications, such as hypocalcemia, decreasing of vitamin-D production and metastatic calcification. Hyperphosphatemia is also contributing to the increased incidence of cardiovascular disease among dialysis-dependent patients. The phosphate binding capacity of iron oxide hydroxides is known in the art. The possible medical application of iron hydroxides and iron oxide hydroxides as phosphate adsorbents is also described.

US 4,970,079 patent discloses a method of controlling serum phosphate level in patients by iron oxy-hydroxides which bind to ingested phosphate. US 5,514,281 patent also discloses a process for the selective elimination of inorganic phosphate from body fluids by using a polynuclear metal oxyhydroxide preferably iron (III) oxyhydroxide.

US 6,174,442 patent describes an adsorbent for phosphate and a process for the preparation thereof, which contains polynuclear β-iron hydroxide stabilized by carbohydrates and/or humic acid.

In order to obtain an iron-based compound which can be used as a pharmaceutical, it is necessary to have an iron-based compound which is stable. It is known that iron oxide- hydroxide is not a stable compound with time ageing occurs. Ageing usually not only involves crystallization but also particle enlargement. Such ageing may alter the phosphate binding of an iron oxide -hydroxide based phosphate adsorbent. Accordingly, there exists a need for a process for manufacturing of an iron containing phosphate adsorbent. The process needs to be scalable, robust and consistently producing an iron containing phosphate adsorbent of the required pharmaceutical grade.

An aqueous solution of sodium carbonate and an aqueous solution of iron (III) chloride hexahydrate were mixed at a temperature of 5 – 10°C, optionally in the presence of solvent- 1. A volume of aqueous solution of sodium carbonate necessary to maintain the pH at about 7.0 to form a colloidal suspension of ferric hydroxide. The resulting mixture was stirred for 90 to 120 minutes at 5 – 10°C. Water was added to the reaction mass with stirring. Stopped the stirring, settled precipitated product and the water was decanted or siphoned. The precipitated product was further filtered and washed with using water. Suspension of the precipitated product was prepared in the water. Subsequently, sucrose and starch were added in to the suspension and stirred for 120 minutes at 25 – 35°C. Cooled the reaction mixture at 10 – 15°C and stirred for 90 to 120 minutes. Solvent-2 was added to the reaction mixture at 10 – 15°C and stirred for 90 to 120 minutes. The product was filtered and washed with the solvent-2 and further dried under vacuum at 30-35°C. Few illustrative examples provided in Table- 1, wherein the iron containing phosphate adsorbents were prepared according to the process of example-2 using the respective combination of Solvent- 1 and Solvent-2 as given in the table:

3) Physical Properties of an Iron Containing Phosphate Adsorbents prepared as per above example-2.

Results: Phosphate binding of an iron containing phosphate adsorbents obtained by following the process of the present invention found in the range of 30 mg/gm to 60 mg/gm. Particle Size Distribution:

from FDA Orange Book
from PubChem