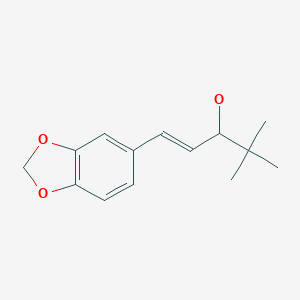 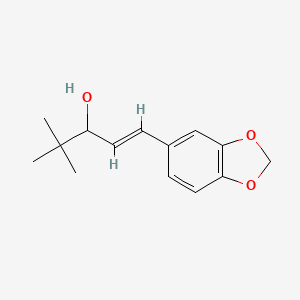 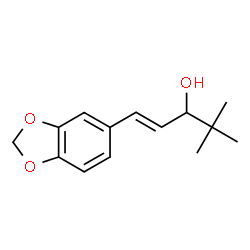 It is used in some countries as an add-on therapy with sodium valproate and clobazam for treating children with Dravet syndromewhose seizures are not adequately controlled.[1][2][3] As of 2017 it was not known whether stiripentol remains useful as children become adolescents nor as they become adults.[4]

Stiripentol inhibits several cytochrome P450 isoenzymes and so interacts with many anticonvulsants and other medicines.[3]

As with most anticonvulsants, the precise mechanism of action is unknown. Regardless, stiripentol has been shown to have anticonvulsant effects of its own.

Stiripentol increases GABAergic activity. At clinically relevant concentrations, it enhances central GABA neurotransmission through a barbiturate-like effect, since it increases the duration of opening of GABA-A receptor channels in hippocampal slices.[5] It has also been shown to increase GABA levels in brain tissues by interfering with its reuptake and metabolism.[6] Specifically, it has been shown to inhibit lactate dehydrogenase, which is an important enzyme involved in the energy metabolism of neurons. Inhibition of this enzyme can make neurons less prone to fire action potentials, likely through activation of ATP-sensitive potassium channels.[7]

Stiripentol also improves the effectiveness of many other anticonvulsants, possibly due to its inhibition of certain enzymes, slowing the drugs’ metabolism and increasing blood plasma levels.[3]

Stiripentol is an α-ethylene alcohol; its chemical formula is 4,4-dimethyl-1-[3,4-(methylendioxy)-phenyl]-1penten-3-ol. It is chiral and is marketed as an equimolar racemic mixture. The R enantiomer appears to be around 2.5 times more active than the S enantiomer.[8]

The synthesis of [14]-labeled stiripentol has been published:The reaction of 3,4-methylenedioxybromobenzene (I) with 14CO2 by means of butyllithium in ether gives 3,4-methylenedioxybenzoic acid (II), which is reduced with LiAlH4 to the corresponding benzyl alcohol (III). Oxidation of (III) with CrO3-pyridine affords the aldehyde (IV), which is condensed with methyl tert-butyl ketone (V) by means of NaOH in refluxing ethanol to give the labeled pentanone (VI). Finally, this compound is reduced to [14C]-labeled stiripentol with NaBH4 in methanol

Stiripentol was discovered in 1978 by scientists at Biocodex and clinical trials started over the next few years.[8] It was originally developed for adults with focal seizures, but failed a Phase III trial.[4]

In December 2001 the European Medicines Agency (EMA) granted stiripentol orphan drug status (designation number EU/3/01/071) for the treatment of severe myoclonic epilepsy of infancy (SMEI, also known as Dravet’s syndrome) in children and in 2007, the EMA granted the drug a marketing authorisation for use of the drug as an add-on to other anti-seizure drugs.[3] It was approved in Canada for this use in 2012.[9] As of 2017 it was also approved for this use in Japan.[2]

As of 2014 it was not approved in the US, and parents of children with Dravets were paying around $1,000 for a month supply to obtain it from Europe.[10]