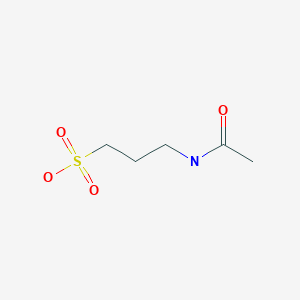 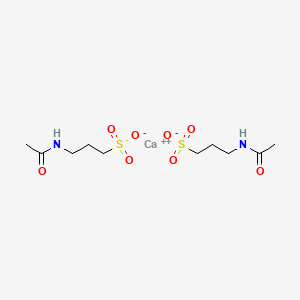 Acamprosate, sold under the brand name Campral, is a medication used along with counselling to treat alcohol dependence.[1][2]

Acamprosate, also known by the brand name Campral™, is a drug used for treating alcohol dependence. Acamprosate is thought to stabilize the chemical balance in the brain that would otherwise be disrupted by alcoholism, possibly by blocking glutaminergic N-methyl-D-aspartate receptors, while gamma-aminobutyric acid type A receptors are activated. Reports indicate that acamprosate only works with a combination of attending support groups and abstinence from alcohol. Certain serious side effects include allergic reactions, irregular heartbeats, and low or high blood pressure, while less serious side effects include headaches, insomnia, and impotence. Acamprosate should not be taken by people with kidney problems or allergies to the drug.

Acamprosate is thought to stabilize chemical signaling in the brain that would otherwise be disrupted by alcohol withdrawal.[3] When used alone, acamprosate is not an effective therapy for alcoholism in most individuals;[4] however, studies have found that acamprosate works best when used in combination with psychosocial support since it facilitates a reduction in alcohol consumption as well as full abstinence.[2][5][6]

Acamprosate is useful when used along with counselling in the treatment of alcohol dependence.[2] Over three to twelve months it increases the number of people who do not drink at all and the number of days without alcohol.[2] It appears to work as well as naltrexone.[2]

Acamprosate is primarily removed by the kidneys and should not be given to people with severely impaired kidneys (creatinine clearance less than 30 mL/min). A dose reduction is suggested in those with moderately impaired kidneys (creatinine clearancebetween 30 mL/min and 50 mL/min).[1][10] It is also contraindicated in those who have a strong allergic reaction to acamprosate calcium or any of its components.[10]

The US label carries warnings about increased of suicidal behavior, major depressive disorder, and kidney failure.[1]

The pharmacodynamics of acamprosate is complex and not fully understood;[11][12][13] however, it is believed to act as an NMDA receptor antagonist and positive allosteric modulator of GABAA receptors.[12][13]

Ethanol and benzodiazepines act on the central nervous system by binding to the GABAA receptor, increasing the effects of the inhibitory neurotransmitter GABA (i.e., they act as positive allosteric modulators at these receptors).[12][4] In chronic alcohol abuse, one of the main mechanisms of tolerance is attributed to GABAA receptors becoming downregulated (i.e. these receptors become less sensitive to GABA).[4] When alcohol is no longer consumed, these down-regulated GABAA receptor complexes are so insensitive to GABA that the typical amount of GABA produced has little effect, leading to physical withdrawal symptoms;[4] since GABA normally inhibits neural firing, GABAA receptor desensitization results in unopposed excitatory neurotransmission (i.e., fewer inhibitory postsynaptic potentialsoccur through GABAA receptors), leading to neuronal over-excitation (i.e., more action potentials in the postsynaptic neuron). One of acamprosate’s mechanisms of action is the enhancement of GABA signaling at GABAA receptors via positive allosteric receptor modulation.[12][13] It has been purported to open the chloride ion channel in a novel way as it does not require GABA as a cofactor, making it less liable for dependence than benzodiazepines. Acamprosate has been successfully used to control tinnitus, hyperacusis, ear pain and inner ear pressure during alcohol use due to spasms of the tensor tympani muscle.[medical citation needed]

In addition, alcohol also inhibits the activity of N-methyl-D-aspartate receptors (NMDARs).[14][15] Chronic alcohol consumption leads to the overproduction (upregulation) of these receptors. Thereafter, sudden alcohol abstinence causes the excessive numbers of NMDARs to be more active than normal and to contribute to the symptoms of delirium tremensand excitotoxic neuronal death.[16] Withdrawal from alcohol induces a surge in release of excitatory neurotransmitters like glutamate, which activates NMDARs.[17] Acamprosate reduces this glutamate surge.[18] The drug also protects cultured cells from excitotoxicity induced by ethanol withdrawal[19] and from glutamate exposure combined with ethanol withdrawal.[20]

Acamprosate is not metabolized by the human body.[13] Acamprosate’s absolute bioavailability from oral administration is approximately 11%.[13] Following administration and absorption of acamprosate, it is excreted unchanged (i.e., as acamprosate) via the kidneys.[13]

Acamprosate was developed by Lipha, a subsidiary of Merck KGaA.[21] and was approved for marketing in Europe in 1989.[citation needed]

In October 2001 Forest Laboratories acquired the rights to market the drug in the US.[21][22]

The first generic versions of acamprosate were launched in the US in 2013.[24]

As of 2015 acamprosate was in development by Confluence Pharmaceuticals as a potential treatment for fragile X syndrome. The drug was granted orphan status for this use by the FDA in 2013 and by the EMA in 2014.[25]

It is sold under the brand name Campral.[1]

In addition to its apparent ability to help patients refrain from drinking, some evidence suggests that acamprosate is neuroprotective (that is, it protects neurons from damage and death caused by the effects of alcohol withdrawal, and possibly other causes of neurotoxicity).[18][26]