The U.S. Food and Drug Administration today approved Mylotarg (gemtuzumab ozogamicin) for the treatment of adults with newly diagnosed acute myeloid leukemia whose tumors express the CD33 antigen (CD33-positive AML). The FDA also approved Mylotarg for the treatment of patients aged 2 years and older with CD33-positive AML who have experienced a relapse or who have not responded to initial treatment (refractory).

Mylotarg originally received accelerated approval in May 2000 as a stand-alone treatment for older patients with CD33-positive AML who had experienced a relapse. Mylotarg was voluntarily withdrawn from the market after subsequent confirmatory trials failed to verify clinical benefit and demonstrated safety concerns, including a high number of early deaths. Today’s approval includes a lower recommended dose, a different schedule in combination with chemotherapy or on its own, and a new patient population.

“We are approving Mylotarg after a careful review of the new dosing regimen, which has shown that the benefits of this treatment outweigh the risk,” said Richard Pazdur, M.D., director of the FDA’s Oncology Center of Excellence and acting director of the Office of Hematology and Oncology Products in the FDA’s Center for Drug Evaluation and Research. “Mylotarg’s history underscores the importance of examining alternative dosing, scheduling, and administration of therapies for patients with cancer, especially in those who may be most vulnerable to the side effects of treatment.”

AML is a rapidly progressing cancer that forms in the bone marrow and results in an increased number of white blood cells in the bloodstream. The National Cancer Institute of the National Institutes of Health estimates that approximately 21,380 people will be diagnosed with AML this year and that 10,590 patients with AML will die of the disease.

Mylotarg is a targeted therapy that consists of an antibody connected to an anti-tumor agent that is toxic to cells. It is thought to work by taking the anti-tumor agent to the AML cells that express the CD33 antigen, blocking the growth of cancerous cells and causing cell death.

The safety and efficacy of Mylotarg as a stand-alone treatment were studied in two, separate trials. The first trial included 237 patients with newly diagnosed AML who could not tolerate or chose not to receive intensive chemotherapy. Patients were randomized to receive treatment with Mylotarg or best supportive care. The trial measured “overall survival,” or how long patients survived from the date they started the trial. Patients who received Mylotarg survived longer than those who received only best supportive care (median overall survival 4.9 months vs. 3.6 months). The second trial was a single-arm study that included 57 patients with CD33-positive AML who had experienced one relapse of disease. Patients received a single course of Mylotarg. The trial measured how many patients achieved a complete remission. Following treatment with Mylotarg, 26 percent of patients achieved a complete remission that lasted a median 11.6 months.

Common side effects of Mylotarg include fever (pyrexia), nausea, infection, vomiting, bleeding, low levels of platelets in the blood (thrombocytopenia), swelling and sores in the mouth (stomatitis), constipation, rash, headache, elevated liver function tests, and low levels of certain white blood cells (neutropenia). Severe side effects of Mylotarg include low blood counts, infections, liver damage, blockage of the veins in the liver (hepatic veno-occlusive disease), infusion-related reactions, and severe bleeding (hemorrhage). Women who are pregnant or breastfeeding should not take Mylotarg, because it may cause harm to a developing fetus or a newborn baby. Patients with hypersensitivity to Mylotarg or any component of its formulation should not use Mylotarg.

The prescribing information for Mylotarg includes a boxed warning that severe or fatal liver damage (hepatotoxicity), including blockage of veins in the liver (veno-occlusive disease or sinusoidal obstruction syndrome), occurred in some patients who took Mylotarg.

Mylotarg received Orphan Drug designation, which provides incentives to assist and encourage the development of drugs for rare diseases.

The FDA granted the approval of Mylotarg to Pfizer Inc. 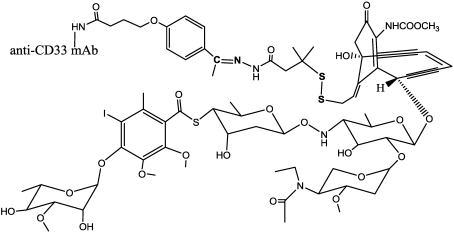 Gemtuzumab ozogamicin (marketed by Wyeth as Mylotarg) is a drug-linked monoclonal antibody (an antibody-drug conjugate) that was used to treat acute myelogenous leukemia from 2000 to 2010. It was withdrawn from market in June 2010 when a clinical trial showed the drug increased patient death and added no benefit over conventional cancer therapies.

Mechanism and side effects

Gemtuzumab is a monoclonal antibody to CD33 linked to a cytotoxic agent from the class of calicheamicins. CD33 is expressed in most leukemic blast cells but also in normal hematopoietic cells, the intensity diminishing with maturation of stem cells.

In the United States, it was approved under an accelerated-approval process by the FDA in 2000 for use in patients over the age of 60 with relapsed acute myelogenous leukemia (AML); or those who are not considered candidates for standard chemotherapy.[6] The accelerated approval was based on the surrogate endpoint of response rate.[7] It was the first antibody-drug conjugate to be approved.[8]

Within the first year after approval, the FDA required a black box warning be added to Gemtuzumab packaging. The drug was noted to increase the risk of veno-occlusive disease in the absence of bone marrow transplantation.[9] Later the onset of VOD was shown to occur at increased frequency in Gemtuzumab patients even following bone marrow transplantation.[10] The drug was discussed in a 2008 JAMA article, which criticized the inadequacy of postmarketing surveillance of biologic agents.[11]

A randomized phase 3 comparative controlled trial (SWOG S0106) was initiated in 2004 by Wyeth in accordance with the FDA accelerated-approval process. The study was stopped[when?] prior to completion due to worrisome outcomes. Among the patients evaluated for early toxicity, fatal toxicity rate was significantly higher in the gemtuzumab combination therapy group vs the standard therapy group. Mortality was 5.7% with gemtuzumab and 1.4% without the agent (16/283 = 5.7% vs 4/281 = 1.4%; P = .01).[7]

In June 2010, Pfizer withdrew Mylotarg from the market at the request of the US FDA.[12][13] However, some other regulatory authorities did not agree with the FDA decision, with Japan’s Pharmaceuticals and Medical Devices Agency stating in 2011 that the “risk-benefit balance of gemtuzumab ozogamicin has not changed from its state at the time of approval”.[14]

In early 2017 Pfizer reapplied for US and EU approval, based on a meta-analysis of prior trials and results of the ALFA-0701 clinical trial, an open-label Phase III trial in 280 older people with AML. [8]