A New Antibiotic (E)-3-(3-Carboxyphenyl)-2-(4-cyanostyryl)quinazolin-4(3H)-one, from University Of Notre Dame 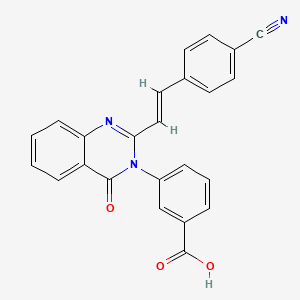 In the face of the clinical challenge posed by resistant bacteria, the present needs for novel classes of antibiotics are genuine. In silico docking and screening, followed by chemical synthesis of a library of quinazolinones, led to the discovery of (E)-3-(3-carboxyphenyl)-2-(4-cyanostyryl)quinazolin-4(3H)–one (compound 2) as an antibiotic effective in vivo against methicillin-resistant Staphylococcus aureus (MRSA). This antibiotic impairs cell-wall biosynthesis as documented by functional assays, showing binding of 2 to penicillin-binding protein (PBP) 2a. We document that the antibiotic also inhibits PBP1 of S. aureus, indicating a broad targeting of structurally similar PBPs by this antibiotic. This class of antibiotics holds promise in fighting MRSA infections.

Staphylococcus aureus is a common bacterium found in moist areas of the body and skin. S. aureus can also grow as a biofilm, representing the leading cause of infection after implantation of medical devices. Approximately 29% (78.9 million) of the US population is colonized in the nose with S. aureus, of which 1.5% (4.1 million) is methicillin-resistant S. aureus (MRSA). In 2005, 478,000 people in the US were hospitalized with a S. aureus infection, of these 278,000 were MRSA infections, resulting in 19,000 deaths. MRSA infections have been increasing from 2% of S. aureus infections in intensive care units in 1974 to 64% in 2004, although more recent data report stabilization. Approximately 14 million outpatient visits occur every year in the US for suspected S. aureus skin and soft tissue infections. About 76% of these infections are caused by S. aureus, of which 78% are due to MRSA, for an overall rate of 59%. Spread of MRSA is not limited to nosocomial (hospital-acquired) infections, as they are also found in community-acquired infections. Over the years, β-lactams were antibiotics of choice in treatment of S. aureus infections. However, these agents faced obsolescence with the emergence of

MRSA. Presently, vancomycin, daptomycin or linezolid are agents for treatment of MRSA infections, although only linezolid can be dosed orally. Resistance to all three has emerged. Thus, new anti-MRSA therapeutic strategies are needed, especially agents that are orally bioavailable.

Clinical resistance to β-lactam antibiotics by MRSA has its basis predominantly in acquisition of the mecA gene, which encodes penicillin-binding protein 2a (PBP2a). PBP2a, a cell-wall DD- transpeptidase, is refractory to inhibition by essentially all commercially available β-lactams (ceftaroline is an exception), antibiotics that irreversibly acylate the active-site serine of typical PBPs. PBPs catalyze biosynthesis of the bacterial cell wall, which is essential for the survival of the bacterium. Accordingly, new ηοη-β-lactam antibiotics that inhibit PBP2a are needed to combat drug-resistant strains of bacteria. SUMMARY

Staphylococcus aureus is responsible for a number of human diseases, including skin and soft tissue infections. Annually, 292,000 hospitalizations in the US are due to S. aureus infections, of which 126,000 are related to methicillin-resistant Staphylococcus aureus (MRSA), resulting in 19,000 deaths. A novel structural class of antibiotics has been discovered and is described herein. A lead compound in this class shows high in vitro potency against Gram-positive bacteria comparable to those of linezolid and superior to vancomycin (both considered gold standards) and shows excellent in vivo activity in mouse models of MRSA infection.

wherein each of the variables are as defined for one or more of the formulas described herein, such as Formula (A).

Structure–Activity Relationship for the 4(3H)-Quinazolinone Antibacterials

We recently reported on the discovery of a novel antibacterial (2) with a 4(3H)-quinazolinone core. This discovery was made by in silico screening of 1.2 million compounds for binding to a penicillin-binding protein and the subsequent demonstration of antibacterial activity againstStaphylococcus aureus. The first structure–activity relationship for this antibacterial scaffold is explored in this report with evaluation of 77 variants of the structural class. Eleven promising compounds were further evaluated for in vitro toxicity, pharmacokinetics, and efficacy in a mouse peritonitis model of infection, which led to the discovery of compound 27. This new quinazolinone has potent activity against methicillin-resistant (MRSA) strains, low clearance, oral bioavailability and shows efficacy in a mouse neutropenic thigh infection model.

Renee Bouley, a third year graduate student in the Department of Chemistry and Biochemistry, has been selected to receive a prestigious American Chemical Society (ACS) Division of Medicinal Chemistry Predoctoral Fellowship.  Bouley is one of only four recipients chosen for the 2013-2014 cycle.

This award supports doctoral candidates working in the area of medicinal chemistry who have demonstrated superior achievements as graduate students and who show potential for future work as independent investigators. These fellowships have been awarded annually since 1991 and include one year stipend support and an invitation to present the fellow’s research results at a special awards session at the ACS National Meeting.

Bouley’s work, conducted under the advisement of Shahriar Mobashery, Navari Family Professor in Life Sciences, and Mayland Chang, Research Professor and Director of the Chemistry-Biochemistry-Biology Interface (CBBI) Program, centers around the discovery of a new class of antibiotics that are selective against staphylococcal species of bacteria, including hard-to-treat methicillin-resistant Staphylococcus aureus (MRSA).  She has already identified a class of compounds that has in vitro activity against bacteria and demonstrated efficacy in mice. Bouley spent three months in 2012 in the laboratory of Prof. Juan Hermoso at Consejo Superior de Investigaciones Cientificas in Madrid, Spain, where she solved the crystal structure of the lead compound in complex with its target protein. Her studies have shown an unprecedented mechanism of action that opens opportunities for clinical resurrection of β-lactam antibiotics in combination with the new antibiotics. Bouley’s work during her fellowship tenure will explore structural analogs of these compounds with the goal of optimizing their potency in vivo and improving their drug-like properties.

Dr. Chang obtained B.S. degrees in biological sciences and chemistry from the University of Southern California, and a Ph.D. in chemistry from the University of Chicago.  Subsequently, she conducted postdoctoral research at Columbia University as a National Institutes of Health postdoctoral fellow.  She joined the faculty of the University of Notre Dame in 2003.  Previously, Dr. Chang was Chief Operating Officer of University Research Network, Inc., Senior Scientist with Pharmacia Corporation, and Senior Chemist at Dow Chemical Company.  She has characterized the ADME properties of numerous drugs, as well as prepared NDAs, INDs, Investigator’s Brochures, product development plans, and candidate drug evaluations.

The Mobashery research program integrates computation, biochemistry, molecular biology, and the organic synthesis of medically important molecules. Bringing together these different disciplines is required to produce both scientific and medical advances for very difficult, but critically important clinical problems.