Vasicine (peganine) is a quinazoline alkaloid. It is the active compound of Justicia adhatoda, after which the chemical is named.

Vasicine has been compared to theophylline both in vitro and in vivo.[1] It has also been studied in combination with the related alkaloid vasicinone. Both the alkaloids in combination (1:1) showed pronounced bronchodilatory activity in vivo and in vitro.[2] Both alkaloids are also respiratory stimulants.[2] Vasicine has a cardiac–depressant effect, while vasicinone is a weak cardiac stimulant; the effect can be normalized by combining the alkaloids.[2][3] Vasicine is reported to have a uterine stimulant effect.[3]

Isolation It is isolated from the leaves of Adhatoda vasica* and also from the seeds of Peganum harmala** by adopting the standard methods of isolation described earlier in this chapter.

dl-Form: 1. It is obtained as needles from ethanol having mp 210°C.

Note: In dilute HCl it is obtained as its dextrorotatory form.

Biosynthesis of Vasicine Various studies in Peganum harmala have evidently revealed vasicine (peganine) to be derived from the anthranilic acid, while the remaining portion of the structure comprising of a pyrrolidine ring provided by ornithine. The probable mechanism of vasicine skeleton may be explained by virtue of the nucleophilic attack from the N-atom present in anthranilate upon the pyrrolidinium cation, ultimately followed by amide formation. However, interestingly this pathway is not being adopted in Justicia adhatoda.

Vasaka (Malabar Nut Tree/Adhatoda zeylanica) is well known in Ayurveda for its beneficial effects in respiratory ailments, particularly as an expectorant in bronchitis. The leaves, flowers, fruits and roots are used extensively for treating cold, cough, whooping-cough, chronic bronchitis and asthma.

Vasaka grows throughout India, up to an altitude of 1,300 meters.

Vasaka contains the pyrroquinazoline alkaloids, including vasicine, vasicol and vasinone along with other minor constituents. Vasicine and vasinone are the major bioactive constituents of Vasaka which have bronchodilatory and antitussive properties.

The alkaloids present in the plant show significant protection against allergen-induced bronchial obstruction.

Respiratory care: Vasaka exhibits anti-inflammatory, antitussive and bronchodilatory action which eases congestion and coughing by helping loosen and thin mucus in airways. Vasaka relieves dyspnea by dilating the airways and improves overall lung functions. The herb is an excellent supportive therapy for symptomatic relief in tuberculosis and pulmonary infections.

One capsule, twice a day or as directed by your physician

Note: Since Himalaya’s Pure Herbs are in capsule form, some children below 14 years may find it difficult to swallow them. For this reason, Pure Herbs are recommended for children ages 14 and above.

The information on this page is not intended to be a substitute for professional medical advice. Do not use this information to diagnose or treat your problem without consulting your doctor. 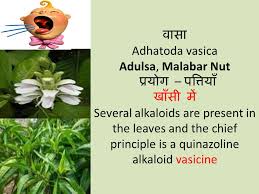