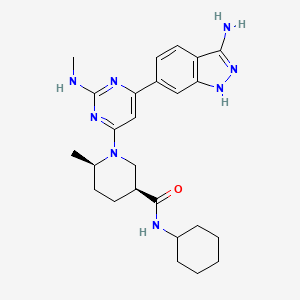 GSK2334470 inhibited activation of an Akt1 mutant lacking the PH domain (pleckstrin homology domain) more potently than full-length Akt1, suggesting that GSK2334470 is more effective at inhibiting PDK1 substrates that are activated in the cytosol rather than at the plasma membrane. GSK2334470 also suppressed T-loop phosphorylation and activation of RSK2 (p90 ribosomal S6 kinase 2), another PDK1 target activated by the ERK (extracellular-signal-regulated kinase) pathway.

GSK2334470 is a highly specific and potent inhibitor of PDK1 (3-Phosphoinositide dependent protein kinase-1) with IC50 of 10 nM. It does not suppress activity on other 96 kinases, including Aurora, ROCK, p38 MAPK and PI3K. GSK2334470 has been used in cells to ablate T-loop phosphorylation and activate SGK, S6K1 and RSK as well as suppress the activation of Akt. 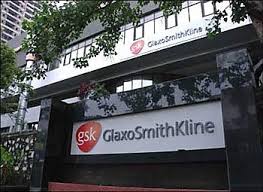 Methylamine (2M solution, 113 ml_, 217 mmol, 2.05 equiv) was charged to a 1 L 3-neck flask fitted with a magnetic stirrer and a thermometer. The mixture was chilled in an ice bath. To this stirred solution was added via addition funnel a solution of 4,6-dichloro-2-(methylsulfonyl)pyrimidine (25 g, 1 10 mmol) in EtOAc (250 ml.) portionwise over a 25 minutes period. The temp was between 5-10 0C. After completion of addition, the ice bath was removed, and the mixture was stirred for 1 hour at ambient temperature. LCMS showed conversion complete. The suspension was filtered, and washed with EtOAc. The filtrate was concentrated in vacuo. The residue was partitioned between water (100 ml.) and EtOAc (450 ml_). The organic was washed with brine, dried over MgSO4, filtered and concentrated in vacuo to give white solids, which were triturated in 150 ml. of CH2CI2. These solids were collected by filtration and washing with cold CH2CI2 (50 ml_). Drying under house vacuum at room temperature for 20 hours, and then high vacuum at room temperature for 3 hours gave 9.31 g of the title compound as a solid. LC-MS (ES) m/z = 179 [M+H]+.

Phosphoinositide-dependent protein kinase-1(PDK1) is a master regulator of the AGC family of kinases and an integral component of the PI3K/AKT/mTOR pathway. As this pathway is among the most commonly deregulated across all cancers, a selective inhibitor of PDK1 might have utility as an anticancer agent. Herein we describe our lead optimization of compound 1toward highly potent and selective PDK1 inhibitors via a structure-based design strategy. The most potent and selective inhibitors demonstrated submicromolar activity as measured by inhibition of phosphorylation of PDK1 substrates as well as antiproliferative activity against a subset of AML cell lines. In addition, reduction of phosphorylation of PDK1 substrates was demonstrated in vivo in mice bearing OCl-AML2 xenografts. These observations demonstrate the utility of these molecules as tools to further delineate the biology of PDK1 and the potential pharmacological uses of a PDK1 inhibitor.