Johnson & Johnson’s multiple myeloma treatment Velcade has been cleared as a first-line therapy in the EU, boosting the number of patients eligible for treatment with the drug.

The European Commission gave the go-ahead for Velcade (bortezomib) as induction therapy in combination with dexamethasone and thalidomide in previously-untreated multiple myeloma patients who are eligible for high-dose chemotherapy and a stem cell transplant. Bortezomib bound to the core particle in a yeast proteasome. The bortezomib molecule is in the center colored by atom type (boron = pink, carbon = cyan, nitrogen = blue, oxygen = red), surrounded by the local protein surface. The blue patch is catalyticthreonine residue whose activity is blocked by the presence of bortezomib.

Bortezomib (INN, originally codenamed PS-341; marketed as Velcade by Millennium Pharmaceuticals and Bortecad by Cadila Healthcare) is the first therapeutic proteasome inhibitor to be tested in humans. It is approved in the U.S. for treating relapsedmultiple myeloma and mantle cell lymphoma. In multiple myeloma, complete clinical responses have been obtained in patients with otherwise refractory or rapidly advancing disease. 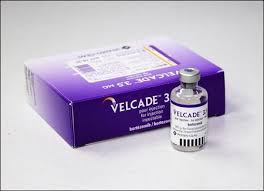 Bortezomib was originally synthesized in 1995 (MG-341) at a company called Myogenics, which soon changed its name to ProScript. After promising preclinical results, the drug (PS-341) was tested in a small Phase I clinical trial on patients with multiple myeloma cancer. ProScript ran out of money and was bought by Leukosite in May 1999. Leukosite in turn was bought byMillennium Pharmaceuticals in October 1999. At this point in time, the project had low priority amongst other projects at the company. This changed significantly when one of the first volunteers to receive the drug in the clinical trial achieved a complete response and were still alive four years later. At the time this was a remarkable result. Later clinical experimentation indicates the possibility of a complete response in 15% of patients in a similar condition, when treated with bortezomib.

In May 2003, seven years after the initial synthesis, bortezomib (Velcade) was approved in the United States by the Food and Drug Administration (FDA) for use in multiple myeloma, based on the results from the SUMMIT Phase II trial.