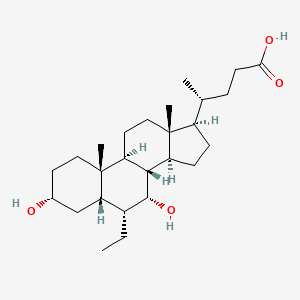 Obeticholic acid (abbreviated to OCA), is a semi-synthetic bile acid analogue which has the chemical structure 6α-ethyl-chenodeoxycholic acid. It has also been known as INT-747. It is undergoing development as a pharmaceutical agent for severalliver diseases and related disorders. Intercept Pharmaceuticals Inc. (NASDAQ symbol ICPT) hold the worldwide rights to develop OCA outside Japan and China, where it is licensed to Dainippon Sumitomo Pharma.[2]

The natural bile acid, chenodeoxycholic acid, was identified in 1999 as the most active physiological ligand for the farnesoid X receptor (FXR), which is involved in many physiological and pathological processes. A series of alkylated bile acid analogues were designed, studied and patented by Roberto Pellicciari and colleagues at the University of Perugia, with 6α-ethyl-chenodeoxycholic acid emerging as the most highly potent FXR agonist.[3] FXR-dependent processes in liver and intestine were proposed as therapeutic targets in human diseases.[4] Obeticholic acid is the first FXR agonist to be used in human drug studies.

OCA is undergoing development in phase 2 and 3 studies for specific liver and gastrointestinal disorders.[5]

Primary biliary cirrhosis (PBC) is an auto-immune, inflammatory liver disease which produces bile duct injury, fibrosis, cholestasisand eventual cirrhosis. It is much more common in women than men and can cause jaundice, itching (pruritus) and fatigue.Ursodeoxycholic acid therapy is beneficial, but the disease often progresses and may require liver transplantation.[6] Animal studies suggested that treatment with FXR agonists should be beneficial in cholestatic diseases such as PBC.[7] OCA at doses between 10 mg and 50 mg was shown to provide significant biochemical benefit, but pruritus was more frequent with higher doses.[8][9] The results of a randomized, double-blind phase 3 study of OCA, 5 mg or 10 mg, compared to placebo (POISE) were presented in April 2014, and showed that the drug met the trial’s primary endpoint of a significant reduction in serum alkaline phosphatase, abiomarker predictive of disease progression, liver transplantation or death.[10]

Non-alcoholic steatohepatitis is a common cause of abnormal liver function with histological features of fatty liver, inflammation andfibrosis. It may progress to cirrhosis and is becoming an increasing indication for liver transplantation. It is increasing in prevalence. OCA is proposed to treat NASH.[11] A phase 2 trial published in 2013 showed that administration of OCA at 25 mg or 50 mg daily for 6 weeks reduced markers of liver inflammation and fibrosis and increased insulin sensitivity.[12]

The Farnesoid X Receptor Ligand Obeticholic Acid in Nonalcoholic Steatohepatitis Treatment (FLINT) trial, sponsored by NIDDK, was halted early in January 2014, after about half of the 283 subjects had completed the study, when a planned interim analysis showed that a) the primary endpoint had been met and b) lipid abnormalities were detected and arose safety concerns. Treatment with OCA (25 mg/day for 72 weeks) resulted in a highly statistically significant improvement in the primary histological endpoint, defined as a decrease in the NAFLD Activity Score of at least two points, with no worsening of fibrosis. 45% (50 of 110) of the treated group had this improvement compared with 21% (23 of 109) of the placebo-treated controls.[13] However concerns about longterm safety issues such as increased cholesterol and adverse cardiovascular events may warrant the concomitant use of statins in OCA-treated patients.[14]

Animal studies suggest that OCA improves intrahepatic vascular resistance and so may be of therapeutic benefit in portal hypertension.[15] An open label phase 2a clinical study is under way.

Bile acid diarrhea (also called bile acid malabsorption) can be secondary to Crohn’s disease or be a primary condition. Reduced median levels of FGF19, an ileal hormone that regulates increased hepatic bile acid synthesis, have been found in this condition.[16] FGF19 is potently stimulated by bile acids and especially by OCA.[17] A proof of concept study of OCA (25 mg/d) has shown clinical and biochemical benefit.[18]

Take 10g of austempered cholic acid 89.6% purity crude (single hetero greater than 2%), 3 times its weight of acetone and added to their 20% by weight of triethylamine was added, was heated at reflux for 2h, cooled slowly to 10 ° C, the precipitated crystals were filtered to give Obey acid organic amine salt crystals.

Acidification [0020] The organic amine salts Obey acid crystals were dissolved with purified water after 10wt% by mass percentage to the PH value of 2.0 with dilute hydrochloric acid, filtered and dried to give purified Obey acid.

[0021] The purified Obey acid ethyl acetate dissolved by heating and then cooling to 20 ° C, the precipitated crystals were filtered and dried to obtain a purity of 98.7% recrystallization Obey acid (single hetero less than 0.1%), recovery was 84.5%.

Obey acid (as shown in formula I) is a semi-synthetic chenodeoxycholic acid derivative, for the treatment of high blood pressure, the portal vein and liver diseases, including primary biliary cirrhosis, bile acid diarrhea, non-alcoholic steatohepatitis. Obey acid through activation of FXR receptors play a role, FXR is a nuclear receptor, is expressed mainly in the liver, intestine, kidney, and it can be adjusted with acids fat and carbohydrate metabolism related gene expression in bile, also regulate immune response. FXR activation can inhibit the synthesis of bile acids, bile acids prevent excessive accumulation of toxic reactions caused.

Obey bile acid synthesis (WO2006122977)
The synthetic process can be achieved, although the enlarged combined, however, the compound Vb produce large amounts of byproducts under strongly alkaline conditions palladium on carbon hydrogenation process for preparing high temperature and strong alkaline compound XI during this step leading to the separation of income a lower rate (about 60%), low yield of this step may be due to compound Vb and XI in unprotected hydroxy dehydration occurs under strongly basic (30% NaOH) and high temperature (95-105 ℃) conditions side effects caused.
synthesis of bile acids Obey,

According to Obey acid 6 was prepared in the form of C Patent Document W02013192097A1 reaction of Example 1, as follows: