Zydus Cadila’s, Lipaglyn (Saroglitazar) won a lot of support at the 75th Anniversary Conference of the American Diabetes Association 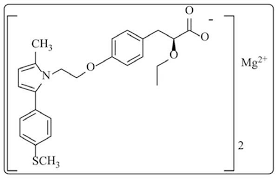 Lipaglyn (Saroglitazar) won a lot of support at the 75th Anniversary Conference of the American Diabetes Association. Lipaglyn is currently under Phase III clinical development for treatment of Non Alcoholic SteatoHepatitis (NASH), a serious liver disease and an unmet healthcare need, globally. There is currently no drug approved for treating NASH. Lipaglyn is already approved in India for the treatment of diabetic dyslipidemia

Zydus Cadila, a leading global healthcare provider, today announced that new scientific and clinical data on Saroglitazar will be presented at the 75th Annual Scientific Sessions of the American Diabetes Association (ADA) in Boston, Massachusetts, USA from 5thto 9th June, 2015. Several analyses of real-world patient data of Saroglitazar will also be presented. The abstracts are available on theADA website.

Zydus is an innovation-led global healthcare provider that discovers, manufactures and markets a broad range of healthcare therapies. The group employs over 19,000 people worldwide including over 1200 scientists engaged in research and is dedicated to creating healthier communities globally.

With a strong research pipeline of NCEs, biologics and vaccines, the group became India’s first pharmaceutical company to launch its own indigenously researched therapy Lipaglyn which is also the world’s first approved therapy for diabetic dyslipidaemia. Exemptia, the world’s first biosimilar of Adalimumab is also a product of Zydus innovation. Zydus also collaborates with partners to support and make therapies affordable and accessible to communities across the world.

As a leading healthcare provider, it aims to become a global research-based pharmaceutical company by 2020.

Lipaglyn (Saroglitazar) sparkled bright at the first ever Indian Heart Journal Award Ceremony at the Cardiological Society of India’s Annual Conference, Chennai attended by a galaxy of leading cardiologists from across India.

Zydus Cadila has announced a breakthrough in the anti-diabetic drug Lipaglyn. Lipaglyn – The world’s first drug for treating Diabetic Dyslipidemia combines lipid and glucose lowering effects in one single molecule.

The Zydus Group announced a breakthrough in its research efforts with Lipaglyn (Saroglilazar), a novel drug targeted at bridging an unmet healthcare need for treating Diabetic Dyslipidemia or Hypertriglyeeridemia in Type II diabetes, not controlled by statins alone. The drug has been approved for launch in India by the Drug Controller General of India (DCGI). With a novel action that offers lipid and glucose lowering effects in one molecule, Lipaglyn is the first Glitazar to be approved anywhere in the world.
“Lipaglyn provides patients suffering from diabetic dyslipidemia the option of a once-daily oral therapy that has a beneficial effect on both lipid parameters as well as glycemic control,” said Pankaj R. Fatel, Chairman and Managing Director, Zydus Cadila. “It has always been our dream to take a molecule right from the concept stage up to its launch. Today, we have realized this dream. It is an important breakthrough and I would like to dedicate this to all the Indian research scientists in the Held of drug discovery,” Patel added,
Diabetic Dyslipidemia is a condition where a person is diabetic and has elevated levels of the total cholesterol, the “bad” low-density lipoprotein (LDL) cholesterol and the triglycerides and a decrease in the “good” high-density lipoprotein (HDL) cholesterol concentration in the blood. Optimal LDL cholesterol levels ibr adults with diabetes are less than 100 mg/dh, optimal HDL cholesterol levels are equal to or greater than 40 mg/dL, and desirable triglycerides levels are less than 150 mg/dLT LipaglynrM, a non-thiazoKdinedione, is the first therapy to be approved for this condition,
World over, it is estimated that 30% of all deaths occur due lo cardiovascular diseases (CVD). In India, one out of every five persons is at serious risk of developing CVD, Research has shown that diabetes is one of the major risk factors of CVD. India has a population of nearly 65 million diabetics and 77 million prc-diabctics, 85 – 97% of the diabetes patients suffer from dyslipidemia or lipid abnormalities. Hence, addressing the problem of diabetes and dyslipidemia is crucial in tackling the health risk posed by CVD.
Discovered by the Zydus Research Centre, the dedicated NCE research arm of the Zydus group, LipaglynrM is a best-in-class innovation, designed to have a unique cellular mechanism of action following an extensive structure-activity relationship study initiated in the year 2000, Lipaglyn1M has a predominant affinity to PPAR alpha isoform and moderate affinity to PPAR gamma isoform of PPAR nuclear receptor subfamily. The molecule has shown beneficial effects on lipids and glyeemic control without side effects. This molecule underwent extensive pre-clinical characterisation and the I.ND was submitted in the year 2004,
As a part of the clinical development programme, extensive Phase-I, Phase-II and Phase-Ill clinical trials were conducted to evaluate the phamacokinetics, pharmacodynamics, efficacy and safety of Lipaglyn. The new drug application for Lipaglyn1 was based on a comprehensive clinical development programme spanning eight years.
Results from the first Phase III programme with Pioglitazone as a comparator drug in diabetes patients showed that the 4 mg dose of Lipaglyn led to a reduction of triglycerides and LDL (bad) cholesterol, and an increase in HDL (good) cholesterol and also showed a reduction in Fasting Plasma Glucose and glycosylated haemoglobin (HbAlc) thereby confirming its beneficial effects of both lipid and glyeemic control in diabetic patients,
In the second Phase III study, Lipaglyn was studied in diabetic dyslipidemic patients insufficiently controlled with statin therapy. The results from this study confirmed that Lipaglyn had a pronounced beneficial effect on both the lipid and glyeemic parameters in these subjects.
In both the studies, Lipaglyn was well tolerated and had a better safety profile than the comparators. Importantly Lipaglyn1 M has a non-renal route of elimination, and did not show adverse events like edema, weight gain, myopathies or derangement of liver and/or kidney functions, thus making it sale and efficacious. LipaglynIM is recommended for once daily administration as 4 mg tablets.
Zydus will offer a dedicated LipaglynIM support programme to patients and earegivers, The programme shall provide important support and information regarding access, adherence, education and thereby help patients to start and appropriately manage their disease and therapy over time.

Lipaglyn[TM] (Saroglitazar) was launched in September 2013 in India, for treating Hypertriglyceridemia and Diabetic Dyslipidemia in Patients with Type 2 Diabetes not controlled by statins. Since then, more than 80,000 patients are availing this drug with a prescriber base over 3500 diabetologists, cardiologists and physicians. Lipaglyn[TM] helps in a reduction of triglycerides and LDL (bad) cholesterol, and an increase in HDL (good) cholesterol and has also shown a reduction in Fasting Plasma Glucose and glycosylated haemoglobin (HbA1c), thereby confirming its beneficial effects on both lipid and glycemic control in diabetic patients. Lipaglyn[TM] is a prescription medicine, and can be taken only under the advice and guidance of a registered medical practitioner.

Zydus Cadila is an innovative, global pharmaceutical company that discovers, manufactures and markets a broad range of healthcare therapies, including small molecule drugs, biologic therapeutics and vaccines. The group employs over 16,500 people worldwide including over 1200 scientists engaged in R & D and is dedicated to creating healthier communities globally. As a leading healthcare provider, it aims to become a global research based pharmaceutical company by 2020.

Zydus to present new scientific data on Lipaglyn in the US