French drug maker Sanofi  Tuesday said it has received approval from the U.S. Food and Drug Administration for its Priftin (rifapentine) tablets to treat latent tuberculosis infection, or LTBI. 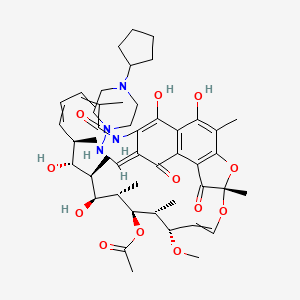 Following a priority review, FDA has approved Priftin in combination with isoniazid, or INH, for a new indication for treatment of LTBI in patients two years of age and older at high risk of progression to tuberculosis or TB disease.

Rifapentine is an antibiotic drug used in the treatment of tuberculosis. It inhibits DNA-dependent RNA polymerase activity in susceptible cells. Specifically, it interacts with bacterial RNA polymerase but does not inhibit the mammalian enzyme.

For the treatment of pulmonary tuberculosis

Rifapentine (INN, marketed under the brand name Priftin by Sanofi-Aventis) is an antibiotic drug used in the treatment of tuberculosis.

Rifapentine was first synthesized in 1965 by the same company that produced rifampin. The drug was approved by the Food and Drug Administration (FDA) in June 1998.

A review of alternative regimens for prevention of active tuberculosis in HIV-negative individuals with latent TB found that a weekly, directly observed regimen of rifapentine with isoniazid for three months was as effective as a daily, self -administered regimen of isoniazid for nine months. But the rifapentine-isoniazid regimen had higher rates of treatment completion and lower rates of hepatotoxicity. However, the rate of treatment-limiting adverse events was higher in the rifapentine-isoniazid regimen. [1]

Rifapentine is a rifamycin derivative antibiotic and has a similar profile of microbiological activity to rifampin (rifampicin). The molecular weight is 877.04.

Use in special populations

Rifapentine has been assigned a Pregnancy Category C by the FDA. Rifapentine in pregnant women has not been studied, but animal reproduction studies have resulted in fetal harm and were teratogenic. If rifapentine and rifampin are used together in pregnancy, coagulation should be monitored due to a possible increased risk of maternal postpartum hemorrhage and infant bleeding. [2]

Rifapentine should be avoided in patients with an allergy to the rifamycin class of drugs. [2] This drug class includes rifampin and rifabutin. [3]

Rifapentine induces metabolism by CYP3A4, CYP2C8 and CYP2C9 enzymes. It may be necessary to adjust the dosage of drugs metabolized by these enzymes if they are taken with rifapentine. Examples of drugs that may be affected by rifapentine include warfarin, propranolol, digoxin, protease inhibitors and oral contraceptives.[2]

Rifapentine was first synthesized in 1965 by the same company that produced rifampin. The drug was approved by the Food and Drug Administration (FDA) in June 1998. It is synthesized in one step from rifampicine.

Rifapentine was first synthesized in 1965 by the same company that produced rifampin. The drug was approved by the Food and Drug Administration (FDA) in June 1998.

Preparation of Rifapentine: this chemical can be prepared by 3-aldehyde rifamycin SV with 1-Amino-4-cyclopentylpiperazine. This reaction needs reagent tetrahydrofuran. The yield is 55 %