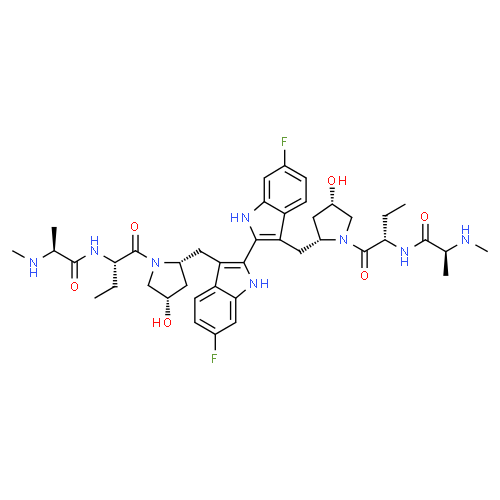 Birinapant is an antagonist of XIAP and cIAP1 with Kd value of 45 nM and <1 nM, respectively.

Birinapant, also known as TL32711,  is a synthetic small molecule and peptido mimetic of second mitochondrial-derived activator of caspases (SMAC) and inhibitor of IAP (Inhibitor of Apoptosis Protein) family proteins, with potential antineoplastic activity. As a SMAC mimetic and IAP antagonist, TL32711 binds to and inhibits the activity of IAPs, such as X chromosome-linked IAP (XIAP) and cellular IAPs 1 and 2. Since IAPs shield cancer cells from the apoptosis process, this agent may restore and promote the induction of apoptosis through apoptotic signaling pathways in cancer cells. IAPs are overexpressed by many cancer cell types and suppress apoptosis by binding and inhibiting active caspases-3, -7 and -9 via their baculoviral lAP repeat (BIR) domains

Birinapant is currently in Phase II clinical trials in patients with acute myeloid leukemia, pancreatic cancer, or ovarian cancer. Although these trials don’t have a control group, the emerging data are promising, TetraLogic chief executive officer John M. Gill told C&EN. (Early-stage cancer clinical trials are commonly run without placebo groups.) The birinapant trials show preliminary evidence both that the drug is having the desired effect and that this effect is associated with signs of clinical activity. Given these results, the company plans to launch randomized Phase II studies early in 2014

Birinapant, also called TL32711, is a potent antagonist for XIAP with Kd value of 45 nM and cIAP1 with Kd value <1 nM [1].
Birinapant not only binds to the isolated BIR3 domains of cIAP1, cIAP2, XIAP but the single BIR domain of ML-IAP with high affinity and degrades TRAF2-bound cIAP1 and cIAP2 rapidly accordingly inhibiting the activation of TNF-mediated NF- kB. Additionally, birinapantcan promote the formation of caspase-8: RIPK1 complex in response to TNF stimulation, which result in downstream caspasesactivation [4].
In the inorganic SUM149- and SUM190-derived cells, which with differential XIAP expression (SUM149 wtXIAP, SUM190 shXIAP) and other high cIAP1/2 but low XIAP binding affinity bivalent Smac mimetic GT13402, XIAP inhibition are needed for increasing TRAIL potency. Opposite, single agent efficacy of Birinapant is owing to pan-IAP antagonism. Rapid cIAP1 degradation was caused by birinapant, as well as NF-κB activation, PARP cleavage andcaspase activation. While combined withTNF-α, showing strong combination activity, the combination was more effective than individual. The response in spheroid models was conserved, whereas in vivo birinapant inhibited tumor growth without adding TNF-α in vitro to resistant cell lines. In a parental cell line, TNF-αcombined withbirinapantinhibited the growth of a melanoma cell line with acquired resistance to the same extent of BRAF inhibition [1, 2].
Drug treatment increased the mean [18F]ICMT-11 tumor uptake with a peak at 24 hours for CPA (40 mg/kg; AUC40-60: 8.04 ± 1.33 and 16.05 ± 3.35 %ID/mL × min at baseline and 24 hours, respectively) and 6 hours for birinapant (15 mg/kg; AUC40-60: 20.29 ± 0.82 and 31.07 ± 5.66 %ID/mL × min, at baseline and 6 hours, respectively). Voxel-based spatiotemporal analysis of tumor-intrinsic heterogeneity showed that [18F] ICMT-11 could detect the discrete pockets of caspase-3 activation. Caspase-3 activation that measured ex vivo associated with the increased tumor [18F] ICMT-11, and early radiotracer uptake predicted apoptosis, distinct from the glucose metabolism with [18F] fluorodeoxyglucose-PET, which depicted the continuous loss of cell viability [3].

Birinapant was designed to reinstate cancer cells’ ability to die. Many cancers that are resistant to conventional chemotherapy drugs have defects in the cell death pathway known as apoptosis. The human body uses apoptosis every day to clear away abnormal or unwanted cells.

Apoptosis is a tightly regulated process, Condon explains, with a network of proteins that activate or block the process. TetraLogic’s target is a family of proteins called the Inhibitor of Apoptosis proteins. As their name suggests, these proteins block apoptosis. They interfere with protease enzymes that carry out cellular dismantling.

TetraLogic’s aim is to lift that blockade to restart apoptosis in tumors. Many tumors have excesses of the apoptosis inhibitor proteins relative to normal cells, so targeting this process has the potential to be less toxic to normal cells compared with conventional chemotherapy.

It turns out nature has a way of negating the inhibitor proteins’ actions—a protein known as Smac. TetraLogic’s founders demonstrated that only a tiny portion of Smac is necessary to keep the inhibitor proteins at bay—the four amino acids at the protein’s N-terminus. “Once you can get a protein down to a tetrapeptide,” about the size of a small-molecule drug, “you start getting a lot of interest from the pharma community,” Condon told C&EN.

Peptides fall apart in the body too quickly to be drugs, so Condon’s team worked with molecular mimics of the Smac tetrapeptide. Their biggest advance was realizing that combining two copies of their tetrapeptide mimics into one molecule made their compounds highly effective at reinstating apoptosis in cancer cell lines. Many proteins in the apoptosis pathway function as dimers, so using these so-called bivalent mimics against them makes sense, Condon said.

However, several of the bivalent compounds were associated with pronounced body weight loss in mice. Condon’s team eventually learned that replacing a branched side chain on their peptide mimics and adding a hydroxyl group to a proline residue improved the tolerability for the animals without impacting the antitumor effect. With that, birinapant was born.

In mice, birinapant shrank tumors. The compound has been in clinical trials since 2009, both on its own and in combination with other chemotherapy drugs such as irinotecan and gemcitabine. On the basis of other biochemical work on the apoptosis pathway, TetraLogic thinks these drugs could act in synergy with birinapant to treat cancer, Condon said.

Birinapant is currently in Phase II clinical trials in patients with acute myeloid leukemia, pancreatic cancer, or ovarian cancer. Although these trials don’t have a control group, the emerging data are promising, TetraLogic chief executive officer John M. Gill told C&EN. (Early-stage cancer clinical trials are commonly run without placebo groups.) The birinapant trials show preliminary evidence both that the drug is having the desired effect and that this effect is associated with signs of clinical activity. Given these results, the company plans to launch randomized Phase II studies early in 2014.

Birinapant/TL32711 (1) is a novel bivalent antagonist of the inhibitor of apoptosis (IAP) family of proteins which is currently in clinical development for the treatment of cancer and hepatitis B virus (HBV) infection. In this report, we present a detailed description of the 1 drug substance synthesis used to support our ongoing clinical studies. Key transformations in this process included the development of a scalable, high-yielding route to acyl indole 14 as well as a two-step dimerization/oxidation of indole 19 that afforded biindole 21 in excellent yield and purity (70% yield, 2 steps; >95 area% purity by HPLC analysis). In addition, partial defluorination of 21 was observed following hydrogen-mediated benzyloxycarbonyl (Cbz) protective group removal which was obviated by the use of HBr/HOAc for this transformation. The use of commercially available amino acid derivatives afforded related impurities which proved difficult to purge in subsequent steps. Thus, defining the impurity specification for these reagents was critical to providing 1 drug substance of >99 area% chemical purity. Using this process, we have successfully prepared 1 drug substance multiple times on >500-g-scale in support of our clinical development program.