Balsalazide is an anti-inflammatory drug used in the treatment of inflammatory bowel disease. It is sold under the brand names Giazo, Colazal in the US and Colazide in the UK. It is also sold in generic form in the US by several generic manufacturers.

Balsalazide is an anti-inflammatory drug used in the treatment of Inflammatory Bowel Disease. It is sold under the name “Colazal” in the US and “Colazide” in the UK. The chemical name is (E)-5-[[-4-(2-carboxyethyl) aminocarbonyl] phenyl]azo] –2-hydroxybenzoic acid. It is usually administered as the disodium salt. Balsalazide releases mesalazine, also known as 5-aminosalicylic acid, or 5-ASA, in the large intestine. Its advantage over that drug in the treatment of Ulcerative colitis is believed to be the delivery of the active agent past the small intestine to the large intestine, the active site of ulcerative colitis.

Balsalazide disodium and its complete synthesis was first disclosed by Chan[18] in 1983, assigned to Biorex Laboratories Limited, England, claiming product ‘Balsalazide’ and process of its preparation. The synthesis involves converting 4-nitrobenzoyl chloride (6) to 4- nitrobenzoyl-β-alanine (7), hydrogenating with Pd/C (5%) in ethanol and isolating by adding diethyl ether to produce 4-aminobenzoyl-β-alanine (8). Thereafter, 4-aminobenzoyl-β-alanine (8) was treated with hydrochloric acid and sodium nitrite to generate N-(4-diazoniumbenzoyl)- β-alanine hydrochloride salt (9) which was reacted at low temperature with disodium salicylate to furnish Balsalazide disodium insitu which was added to dilute hydrochloric acid at low temperature to produce Balsalazide (1) (Scheme-1.1). Thus obtained Balsalazide was recrystallized with hot ethanol and converted to pharmaceutically acceptable salt (disodium salt).

Optimization of this diazonium salt based process was performed by Huijun et al[19] and reported the preparation of the title compound in 64.6% overall yield. Zhenhau et al[20] have synthesized 1 from 4-nitrobenzoic acid (12) via chlorination, condensation, hydrogenation, diazotization, coupling and salt formation with overall yield 73%. Li et al[21] have given product in 73.9% total yield starting from 4-nitrobenzoyl chloride (6), where as Yuzhu et al[22] confirmed chemical structure of Balsalazide disodium by elemental analysis, UV, IR, 1H-NMR and ESI-MS etc. Shaojie et al[23] have also followed same process for its preparation. Yujie et al[24] synthesized 1 in this way; preparation of 4-nitrobenzoyl-β-alanine (7) under microwave irradiation of 420 W at 52oC for 10sec., reduction in ethyl acetate in the presence of Pd/C catalyst then diazotization, coupling and salt formation. Eckardt et al[25] have developed a process for the preparation of Balsalazide which comprises, conversion of 4-aminobenzoyl-β-alanine (8) to 4-ammoniumbenzoyl-β-alanine sulfonate salt using a sulfonic acid in water. This was treated with aq. sodium nitrite solution at low temperature to generate 4-diazoniumbenzoyl-β-alanine sulfonate salt (11) which was quenched with aq. disodium salicylate to furnish Balsalazide disodium solution. This was further acidified to allow isolation of 1 and then conversion to disodium salt (Scheme-1.2) in 76% yield.

Balsalazide disodium (1) represents an effective gastrointestinal anti-inflammatory compound useful as a medicament for the treatment of diseases such as ulcerative colitis. It is delivered intact to the colon where it is cleaved by bacterial azoreduction thereby generating 5-aminosalicylic acid as the medicinally active component.

To date, relatively few patents or literature articles have dealt with the preparation of Balsalazide or the disodium salt. For instance, U.S. Pat. No. 4,412,992 (Biorex, 1983) is the first patent that we uncovered that claims the compound Balsalazide and a strategy of how to prepare it which strategy is depicted in Scheme 1. 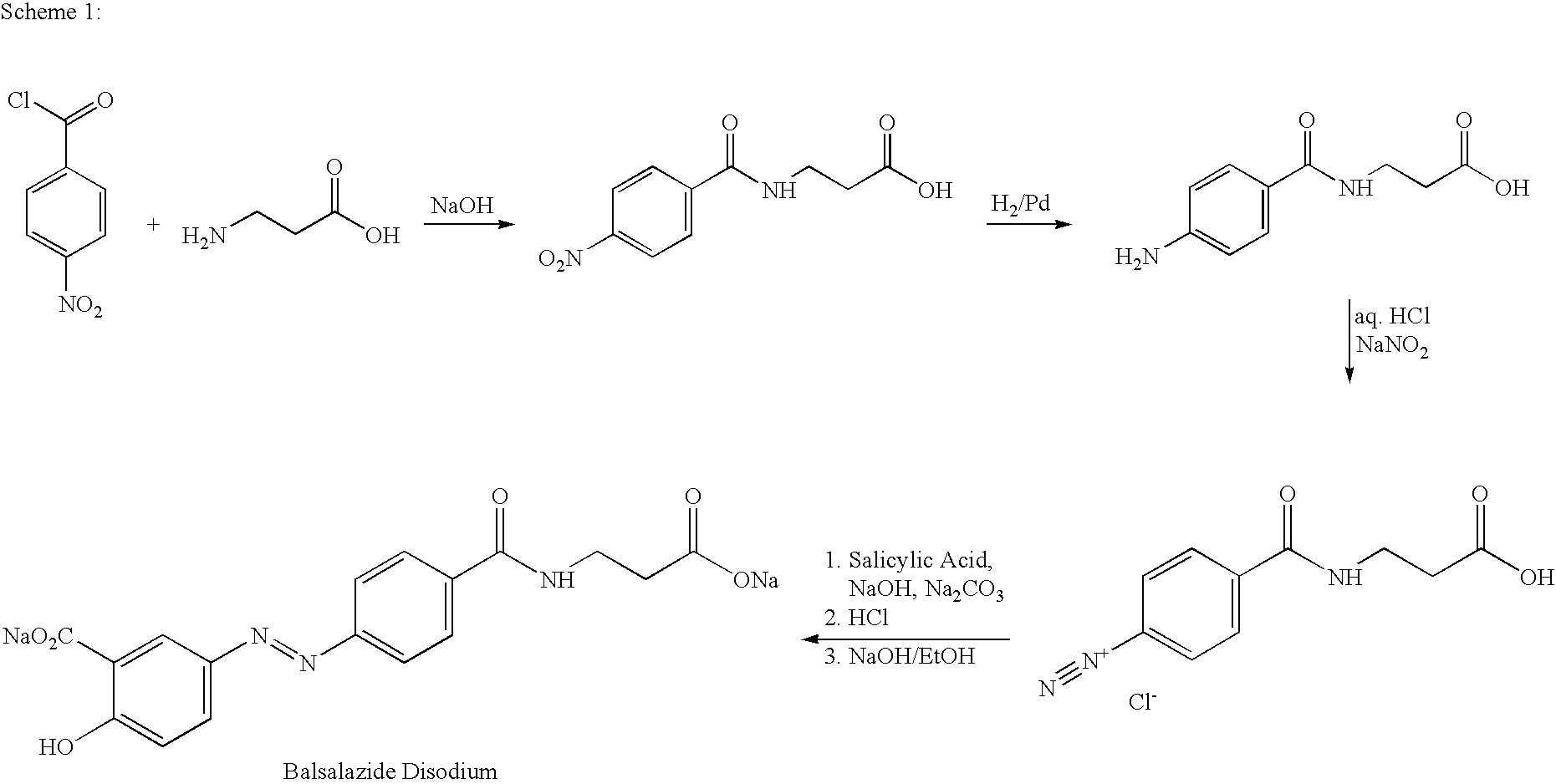 Problems arise with the above strategy and the optimization process.

It is well-documented in the literature, for instance in Thermochimica Acta, 225, 201-211 (1993), that diazonium salts can be involved in serious accidents in their use. A possible cause of some of the diazonium salt related accidents is that, for one reason or another, an intermediate material appeared in crystalline form in the vessel of the reaction. As a result, a potentially severe drawback of the above processes occurs. Since the intermediate hydrochloride salt of 4-aminobenzoyl-β-alanine has poor solubility in water, it may pose a safety-risk in the subsequent diazotation reaction.

Also, it is well-known that certain diazonium salts possess high mechanical and heat sensitivity and that their decomposition goes through the liberation of non-condensable nitrogen gas which results in the possibility of runaway reactions and explosions. Obviously this safety consideration becomes more pertinent upon further scale-up.

Therefore, for commercial production of Balsalazide disodium, there was a need to develop a scalable and intrinsically better process

For the continuous operation, a conventional dual-head metering pump (Ratiomatic by FMI) was used to deliver the mesylate solution and the aqueous sodium nitrite solution. The schematic diagram shown in FIG. 4 represents a set-up used for the continuous process. The first pump-head was set at 13.9 g/min whereas the second was set at 2.1 g/min. These flow rates offered a residence time of 9.4 min. The yield of the coupled intermediate from this residence time was 93%. The working solutions were prepared as follow:

The mesylate solution was prepared by the addition into a 2 L 3-necked round bottom flask, of N-(4-aminobenzoyl) β-alanine (120 g) followed by of DI water (1560 g) and methanesulfonic acid (177.5 g) (Batch appearance: clear solution). The first pump-head was primed with this solution and the flow rate was adjusted to 13.9 g/min.

The sodium nitrite solution was prepared by dissolving of sodium nitrite (41.8 g) in of DI water (240 g) (Batch appearance: clear solution). The second pump-head was primed with this solution and the flow rate adjusted to 2.1 g/min.

The diazotation reaction was performed in a 500 ml jacketed flow reactor with a bottom drain valve. The drain valve was set at 16 g/min. For reactor start-up, the flow reactor was charged with 150 mL of DI water as a working volume and cooled to the reactions initial temperature of 0-5° C. Concomitantly, the additions of the mesylate and sodium nitrite solutions were started and the bottom valve of the flow reactor was opened. During the diazotization, the flow rate of both solutions remained fixed and the temperature was kept below 12° C. and at the end of additions the pumps were stopped while the remaining contents in the flow reactor were drained into the quenching salicylic acid solution. Analysis of the contents in the quenching reactor indicated no signs of uncoupled starting material (diazonium compound). The reactor contents were heated to 60-65° C. for 2-3 hrs before adjusting the pH to precipitate the coupling product. This provided 191.5 g of product.