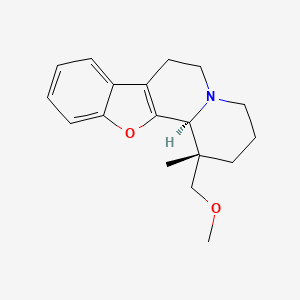 and its hydrochloric salt were synthesized by Orion Pharma, Finland.

The absolute configuration was assigned by optical rotation and later by single-crystal X-ray diffraction (see Supporting Information). The optical purity of the material was >97%.

The alpha2-adrenoceptor subtypes have distinct tissue distributions and functional roles. For instance, while alpha2A-adrenoceptors are widely expressed in various tissues, alpha2C-adrenoceptors are concentrated in the CNS, and they appear to play a role in the modulation of specific CNS-mediated behavioural and physiological responses. Compounds that are non-specific to any of the above-mentioned alpha2 subtypes, and compounds that are specific to certain alpha2 subtypes, are already known. For example, atipamezole is a non-specific alpha2 antagonist. Atipamezole has been described in, for example, EP-A-183 492 (cf. p.13, compound XV) and Haapalinna, A. et al., Naunyn-Schmiedeberg’s Arch. Pharmacol. 356 (1997) 570-582. U.S. Patent No. 5,902,807 describes compounds that are selective antagonists for the alpha2C subtype and may be used in the treatment of mental illness, e.g. mental disturbance induced by stress. Such compounds include, for example, MK-912 and BAM- 1303. Furthermore, WO-A-99 28300 discloses substituted imidazole derivatives having agonist-like activity for alpha2B- or 2B/2C-adrenoceptors. hi addition, WO 01/64645 relates to derivatives of quinoline useful as alpha2 antagonists, as well as to selective alpha2C antagonist agents. The disclosures of all documents cited above in this paragraph are incorporated by reference herein.

Several arylquinolizine derivatives and related compounds have been described in the literature, some of which possess valuable pharmaceutical effects. For example, U.S. Patents No. 4,806,545 and 4,044,012 describe 1,1-disubstituted indolo[2,3-«]quinolizidines useful as vasodilators and antihypoxic agents. Further, substituted arylquinolizine derivatives, described for example in U.S. Patent No. 4,686,226 possessing alpha2-adrenoceptor antagonistic activity are useful for example as antidepressant, antihypertensive, or antidiabetic agents or platelet aggregation inhibitors. In addition, U.S. Patent No. 3,492,303 relates to indolo[2,3- α]quinolizidines useful as central nervous system depressants.

By DR ANTHONY MELVIN CRASTO Ph.D in Uncategorized on September 16, 2016.
← How to document a Product Transfer? Example templates! (3S)-3-[(2-amino-5-methoxypyrimidin-4-yl)amino]heptan-1-ol for the treatment of viral infections →