The breakthrough status was based on data from the Phase III INO-VATE ALL trial, which enrolled 326 adult patients with relapsed or refractory CD22-positive ALL and compared inotuzumab ozogamicin to standard of care chemotherapy………….http://www.pharmaceutical-technology.com/news/newsfda-grants-breakthrough-status-pfizer-leukaemia-drug-inotuzumab-ozogamicin-4697877?WT.mc_id=DN_News

Inotuzumab ozogamicin (CMC-544) is an antibody-drug conjugate for the treatment of cancers.[1] It consists of the humanized monoclonal antibody inotuzumab (for CD22), linked to a cytotoxic agent from the class of calicheamicins (which is reflected by ‘ozogamicin‘ in the drug’s name).[2]

This drug is being developed by Pfizer and UCB.

Monoclonal antibodies (mAbs) and derivatives are currently the fastest growing class of therapeutic molecules. More than 30 G-type immunoglobulins (IgG) and related agents have been approved over the past 25 years mainly for cancers and inflammatory diseases. In oncology, mAbs are often combined with cytotoxic drugs to enhance their therapeutic efficacy. Alternatively, small anti-neoplastic molecules can be chemically conjugated to mAbs, used both as carriers (increased half-life) and as targeting agents (selectivity). Potential benefits of antibody-drug conjugates (ADCs), strategies, and development challenges are discussed in this review. Several examples of ADCs are presented with emphasis on three major molecules currently in late clinical development as well as next generation thio-mAbs conjugates with improved therapeutic index.

Structure of inotuzumab ozogamicin. ABOVE 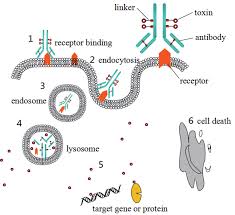 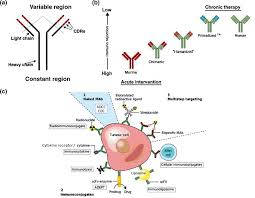 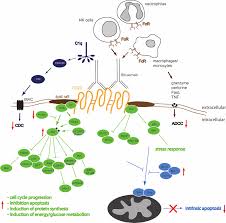 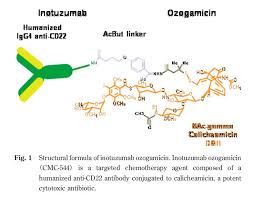