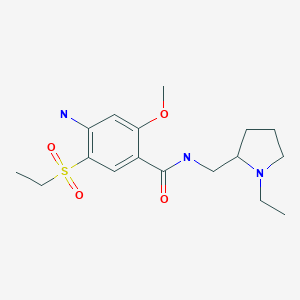 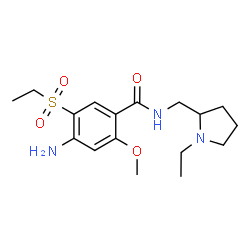 Amisulpride is an antiemetic and antipsychotic medication used at lower doses intravenously to prevent and treat postoperative nausea and vomiting; and at higher doses orally and intramuscularly to treat schizophrenia and acute psychotic episodes. It is sold under the brandnames Barhemsys[6] (as an antiemetic) and Solian, Socian, Deniban and others (as an antipsychotic).[2] It is also used to treat dysthymia.[7]

Amisulpride is believed to work by blocking, or antagonizing, the dopamine D2 receptor, reducing its signalling. The effectiveness of amisulpride in treating dysthymia and the negative symptoms of schizophrenia is believed to stem from its blockade of the presynapticdopamine D2 receptors. These presynaptic receptors regulate the release of dopamine into the synapse, so by blocking them amisulpride increases dopamine concentrations in the synapse. This increased dopamine concentration is theorized to act on dopamine D1 receptors to relieve depressive symptoms (in dysthymia) and the negative symptoms of schizophrenia.[7]

It was introduced by Sanofi-Aventis in the 1990s. Its patent expired by 2008, and generic formulations became available.[11] It is marketed in all English-speaking countries except for Canada and the United States.[10] A New York City based company, LB Pharmaceuticals, has announced the ongoing development of LB-102, also known as N-methyl amisulpride, an antipsychotic specifically targeting the United States.[12][13] A poster presentation at European Neuropsychopharmacology[14] seems to suggest that this version of amisulpride, known as LB-102 displays the same binding to D2, D3 and 5HT7 that amisulpride does.[15][16]

In a 2013 study in a comparison of 15 antipsychotic drugs in effectiveness in treating schizophrenic symptoms, amisulpride was ranked second and demonstrated high effectiveness. 11% more effective than olanzapine (3rd), 32-35% more effective than haloperidol, quetiapine, and aripiprazole, and 25% less effective than clozapine (1st).[9] Although according to other studies it appears to have comparable efficacy to olanzapine in the treatment of schizophrenia.[17][18] Amisulpride augmentation, similarly to sulpirideaugmentation, has been considered a viable treatment option (although this is based on low-quality evidence) in clozapine-resistant cases of schizophrenia.[19][20] Another recent study concluded that amisulpride is an appropriate first-line treatment for the management of acute psychosis.[21]

Neither is it recommended to use amisulpride in patients with hypersensitivities to amisulpride or the excipients found in its dosage form.[2]

Hyperprolactinaemia results from antagonism of the D2 receptors located on the lactotrophic cells found in the anterior pituitary gland. Amisulpride has a high propensity for elevating plasma prolactin levels as a result of its poor blood-brain barrier penetrability and hence the resulting greater ratio of peripheral D2 occupancy to central D2 occupancy. This means that to achieve the sufficient occupancy (~60–80%[24]) of the central D2 receptors in order to elicit its therapeutic effects a dose must be given that is enough to saturate peripheral D2receptors including those in the anterior pituitary.[25][26]

The British National Formulary recommends a gradual withdrawal when discontinuing antipsychotics to avoid acute withdrawal syndrome or rapid relapse.[27] Symptoms of withdrawal commonly include nausea, vomiting, and loss of appetite.[28] Other symptoms may include restlessness, increased sweating, and trouble sleeping.[28] Less commonly there may be a felling of the world spinning, numbness, or muscle pains.[28] Symptoms generally resolve after a short period of time.[28]

There is tentative evidence that discontinuation of antipsychotics can result in psychosis.[29] It may also result in reoccurrence of the condition that is being treated.[30] Rarely tardive dyskinesia can occur when the medication is stopped.[28]

Torsades de pointes is common in overdose.[31][32] Amisulpride is moderately dangerous in overdose (with the TCAs being very dangerous and the SSRIs being modestly dangerous).[33][34]

Amisulpride should not be used in conjunction with drugs that prolong the QT interval (such as citalopram, venlafaxine, bupropion, clozapine, tricyclic antidepressants, sertindole, ziprasidone, etc.),[33] reduce heart rate and those that can induce hypokalaemia. Likewise it is imprudent to combine antipsychotics due to the additive risk for tardive dyskinesia and neuroleptic malignant syndrome.[33]

Amisulpride and its relatives sulpiride, levosulpiride, and sultopride have been shown to bind to the high-affinity GHB receptor at concentrations that are therapeutically relevant (IC50 = 50 nM for amisulpride).[37]Amisulpride functions primarily as a dopamine D2 and D3 receptor antagonist. It has high affinity for these receptors with dissociation constantsof 3.0 and 3.5 nM, respectively.[36] Although standard doses used to treat psychosis inhibit dopaminergic neurotransmission, low doses preferentially block inhibitory presynaptic autoreceptors. This results in a facilitation of dopamine activity, and for this reason, low-dose amisulpride has also been used to treat dysthymia.[2]

Amisulpride also appears to bind with high affinity to the serotonin 5-HT2B receptor (Ki = 13 nM), where it acts as an antagonist.[36] The clinical implications of this, if any, are unclear.[36] In any case, there is no evidence that this action mediates any of the therapeutic effects of amisulpride.[36]

Amisulpride was not approved by the Food and Drug Administration for use in the United States until February 2020, but it is used in Europe,[41]Israel, Mexico, India, New Zealand and Australia[2] to treat psychosis and schizophrenia.[42][43]

Amisulpride was approved for use in the United States in February 2020.[44][6]

4-Amino-N-((1-ethyl-2-pyrrolidinyl)methyl)-5-(ethylsulfonyl)-o-anisamide, could be produced through many synthetic methods.

Following is one of the synthesis routes:
Firstly, the acetylation of 5-aminosalicylic acid (I) with acetic anhydride in hot acetic acid affords 5-acetaminosalicylic acid (II), which is methylated with dimethyl sulfate and K2CO3 in refluxing acetone producing methyl 2-methoxy-5-acetaminobenzoate (III). Secondly, nitration of (III) with HNO3 in acetic acid affords methyl 2-methoxy-4-nitro-5-acetaminobenzoate (IV), which is deacetylated with H2SO4 in refluxing methanol to give methyl 2-methoxy-4-nitro-5-aminobenzoate (V). Next, the diazotation of (V) with NaNO2-HCl, followed by reaction with sodium ethylmercaptide, oxidation with H2O2 and hydrolysis with NaOH in ethanol yields 2-methoxy-4-nitro-5-(ethylsulfonyl)benzoic acid (VI), which is condensed with N-ethyl-2-aminomethylpyrrolidine (VII) in the presence of ethyl chloroformate and triethylamine in dioxane affording 2-methoxy-4-nitro-N-[(1-ethyl-2-pyrrolidinyl) methyl]-5-(ethylsulfonyl)benzamide (VIII). At last, this compound is reduced with H2 over Raney-Ni in ethanol. Treatment of thiourea (I) with iodomethane provided S-methylthiouronium iodide (II). This was further condensed with N-methylpiperazine (III) to afford the intermediate piperazine-1-carboxamidine (IV)

Regioselective lithiation of 1,2,4-trichlorobenzene (V) with n-BuLi at -60 C, followed by quenching of the resultant organolithium compound (VI) with N,N-dimethylformamide yielded 2,3,5-trichlorobenzaldehyde (VII) (1), which was then reduced with NaBH4 to provide alcohol (VIII). Bromination of (VIII) using PBr3 afforded compound (IX), whose bromide atom was displaced with KCN to give the trichlorophenylacetonitrile (X). Claisen condensation of (X) with ethyl formate in the presence of NaOEt furnished the oxo nitrile sodium enolate (XI), which was subsequently O-alkylated with iodomethane yielding the methoxy acrylonitrile (XII). Finally, cyclization of (XII) with the piperazine-1-carboxamidine (IV) in EtOH gave rise to the target pyrimidine derivative

Amisulpride is represented by the formula (I) as given below.

The product patent U.S. Pat. No. 4,401,822 describes preparation of amisulpride as shown in scheme (I) 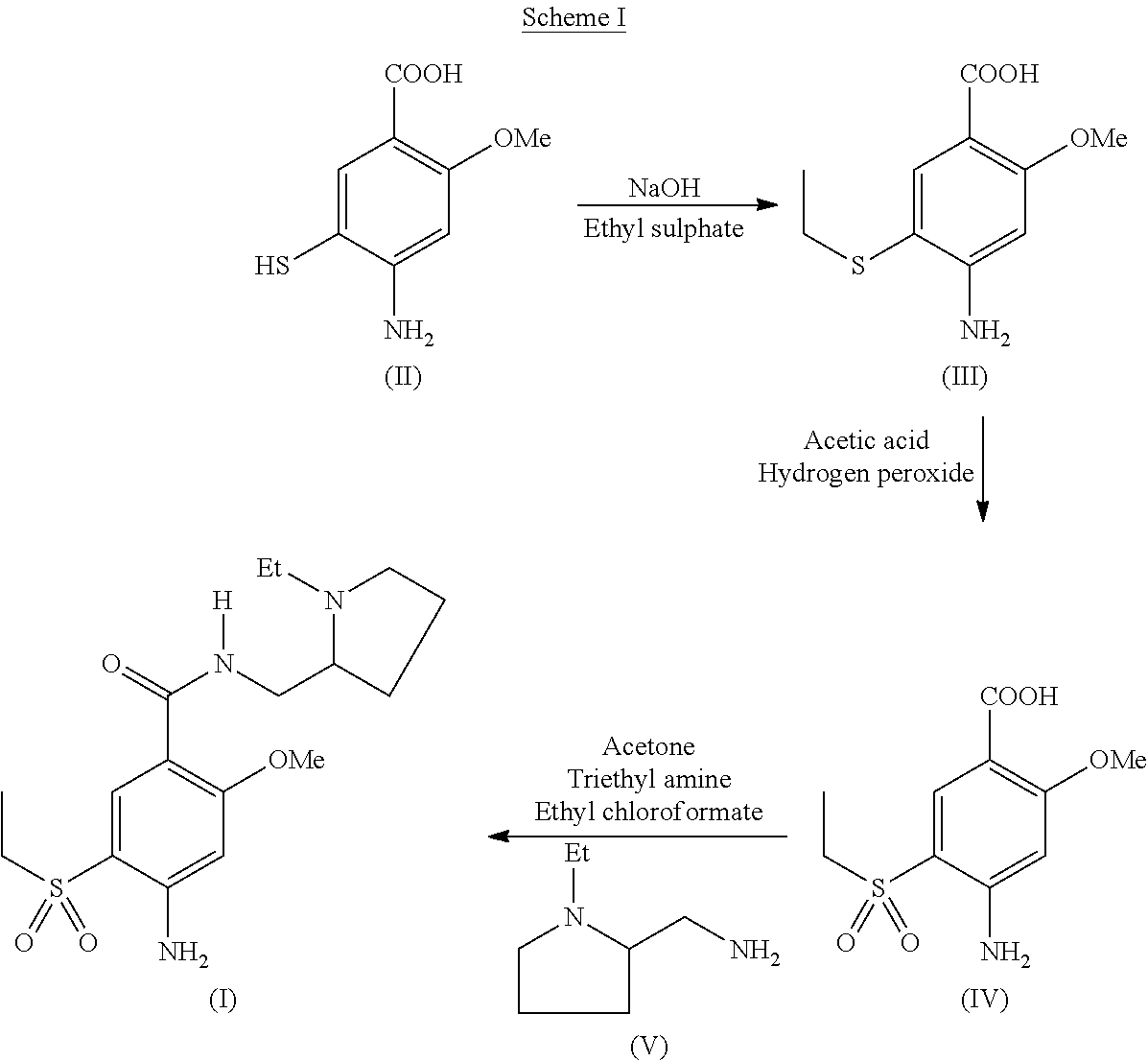 The synthesis of amisulpride involves oxidation of 2-methoxy-4-amino-5-ethyl-thio benzoic acid (III) using acetic acid and hydrogen peroxide at 40-45° C. for few hours to obtain 2-methoxy-4-amino-5-ethyl-sulfonyl benzoic acid (IV). In our attempt to repeat this reaction, we found that almost 22 hours were required for completion and the purity of compound (IV) was 87.6%.