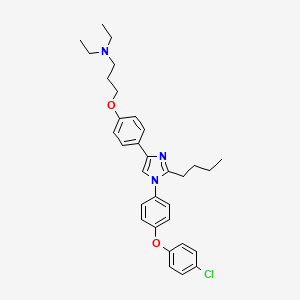 Azeliragon is in phase III clinical for the treatment of Alzheimer’s type dementia.

Azeliragon was originally by TransTech Pharma (now vTv Therapeutics), then licensed to Pfizer in 2006.

vTv Therapeutics  (previously TransTech Pharma) is developing azeliragon, an orally active antagonist of the receptor for advanced glycation end products (RAGE), for the treatment of Alzheimer’s disease (AD) in patients with diabetes.  In June 2019, this was still the case .

Azeliragon was originally developed at TransTech Pharma. In September 2006, Pfizer entered into a license agreement with the company for the development and commercialization of small- and large-molecule compounds under development at TransTech. Pursuant to the collaboration, Pfizer gained exclusive worldwide rights to develop and commercialize TransTech’s portfolio of RAGE modulators, including azeliragon.

Azeliragon (TTP488) is an orally bioavailable small molecule that inhibits the receptor for advanced glycation endproducts (RAGE). A Phase 2 clinical trial to evaluate azeliragon as a potential treatment of mild-AD in patients with type 2 diabetes is ongoing.  The randomized, double-blind, placebo-controlled multicenter trial is designed as sequential phase 2 and phase 3 studies operationally conducted under one protocol. For additional information on the study, refer to NCT03980730 at Clinicaltrials.gov.

RAGE is an immunoglobulin-like cell surface receptor that is overexpressed in brain tissues of patients with AD. The multiligand nature of RAGE is highlighted by its ability to bind diverse ligands such as advanced glycation end-products (AGEs), linked to diabetic complications and β-amyloid fibrils, a hallmark of AD. The association between type 2 diabetes and AD is well documented. A linear correlation between circulating hemoglobin A1c (HbA1c) levels and cognitive decline has been demonstrated in the English Longitudinal Study of Ageing.

Binding of ligands such as advanced glycation endproducts (AGEs), S100/calgranulin/EN-RAGE, b-amyloid, CML (Ne-Carboxymethyl lysine), and amphoterin to RAGE has been shown to modify expression of a variety of genes. For example, in many cell types interaction between RAGE and its ligands generates oxidative stress, which thereby results in activation of the free radical sensitive transcription factor NF-kB, and the activation of NF-kB regulated genes, such as the cytokines IL- 1 b, TNF- a, and the like. In addition, several other regulatory pathways, such as those involving p21 ras.

MAP kinases, ERK1 and ERK2, have been shown to be activated by binding of AGEs and other ligands to RAGE. In fact, transcription of RAGE itself is regulated at least in part by NF-kB. Thus, an ascending, and often detrimental, spiral is fueled by a positive feedback loop initiated by ligand binding. Antagonizing binding of physiological ligands to RAGE, therefore, is our target, for down-regulation of the pathophysiological changes brought about by excessive concentrations of AGEs and other ligands for RAGE.

Pharmaceutically acceptable salts of a given compound may differ from each other with respect to one or more physical properties, such as solubility and dissociation, true density, melting point, crystal shape, compaction behavior, flow properties, and/or solid state stability. These differences affect practical parameters such as storage stability, compressibility and density (important in formulation and product manufacturing), and dissolution rates (an important factor in determining bio-availability). Although U.S. Patent No. 7,884,219 discloses Form I and Form II of COMPOUND I as a free base, there is a need for additional drug forms that are useful for inhibiting RAGE activity in vitro and in vivo, and have properties suitable for large-scale manufacturing and formulation. Provided herein