FDA approves new combination treatment for acute myeloid leukemia
The U.S. Food and Drug Administration today approved Rydapt (midostaurin) for the treatment of adult patients with newly diagnosed acute myeloid leukemia (AML) who have a specific genetic mutation called FLT3, in combination with chemotherapy. The drug is approved for use with a companion diagnostic, the LeukoStrat CDx FLT3 Mutation Assay, which is used to detect the FLT3 mutation in patients with AML.

The U.S. Food and Drug Administration today approved Rydapt (midostaurin) for the treatment of adult patients with newly diagnosed acute myeloid leukemia (AML) who have a specific genetic mutation called FLT3, in combination with chemotherapy. The drug is approved for use with a companion diagnostic, the LeukoStrat CDx FLT3 Mutation Assay, which is used to detect the FLT3 mutation in patients with AML.

AML is a rapidly progressing cancer that forms in the bone marrow and results in an increased number of white blood cells in the bloodstream. The National Cancer Institute estimated that approximately 19,930 people would be diagnosed with AML in 2016 and 10,430 were projected to die of the disease.

“Rydapt is the first targeted therapy to treat patients with AML, in combination with chemotherapy,” said Richard Pazdur, M.D., acting director of the Office of Hematology and Oncology Products in the FDA’s Center for Drug Evaluation and Research and director of the FDA’s Oncology Center of Excellence. “The ability to detect the gene mutation with a diagnostic test means doctors can identify specific patients who may benefit from this treatment.”

Rydapt is a kinase inhibitor that works by blocking several enzymes that promote cell growth. If the FLT3 mutation is detected in blood or bone marrow samples using the LeukoStrat CDx FLT3 Mutation Assay, the patient may be eligible for treatment with Rydapt in combination with chemotherapy.

Common side effects of Rydapt in patients with AML include low levels of white blood cells with fever (febrile neutropenia), nausea, inflammation of the mucous membranes (mucositis), vomiting, headache, spots on the skin due to bleeding (petechiae), musculoskeletal pain, nosebleeds (epistaxis), device-related infection, high blood sugar (hyperglycemia) and upper respiratory tract infection. Rydapt should not be used in patients with hypersensitivity to midostaurin or other ingredients in Rydapt. Women who are pregnant or breastfeeding should not take Rydapt because it may cause harm to a developing fetus or a newborn baby. Patients who experience signs or symptoms of lung damage (pulmonary toxicity) should stop using Rydapt.

The FDA granted this application Priority Review, Fast Track (for the mastocytosis indication) and Breakthrough Therapy (for the AML indication) designations.

Midostaurin is an inhibitor of tyrosine kinase, protein kinase C, and VEGF. Midostaurin inhibits cell growth and phosphorylation of FLT3, STAT5, and ERK. It is a potent inhibitor of a spectrum of FLT3 activation loop mutations. it  is prepared by acylation of the alkaloid staurosporine (I) with benzoyl chloride (II) in the presence of diisopropylethylamine in chloroform.

Midostaurin inhibits both wild-type FLT3 and FLT3 mutant, wherein the internal tandem duplication mutations (FLT3-ITD), and the point mutation to be inhibited in the tyrosine kinase domain of the molecule at positions 835 and 836.Midostaurin is tested in patients with AML.

Massachusetts General Hospital is conducting phase I clinical trials for the treatment of adenocarcinoma of the rectum in combination with radiation and standard chemotherapy.

Midostaurin (PKC412) is a multi-target protein kinase inhibitor being investigated for the treatment of acute myeloid leukemia (AML) and myelodysplastic syndrome (MDS). It is a semi-synthetic derivative of staurosporine, an alkaloid from the bacterium Streptomyces staurosporeus, and is active in patients with mutations of CD135 (FMS-like tyrosine kinase 3 receptor).[1]

After successful Phase II clinical trials, a Phase III trial for AML has started in 2008. It is testing midostaurin in combination with daunorubicin and cytarabine.[2] In another trial, the substance has proven ineffective in metastatic melanoma.[3]

Midostaurin has also been studied at Johns Hopkins University for the treatment of age-related macular degeneration (AMD), but no recent progress reports for this indication have been made available. Trials in macular edema of diabetic origin were discontinued at Novartis.

or a salt thereof, hereinafter: “Compound of formula II or midostaurin”.

The nomenclature of the products is, on the complete structure of staurosporine ([storage]-NH-CH ₃derived, and which is designated by N-substituent on the nitrogen of the methylamino group 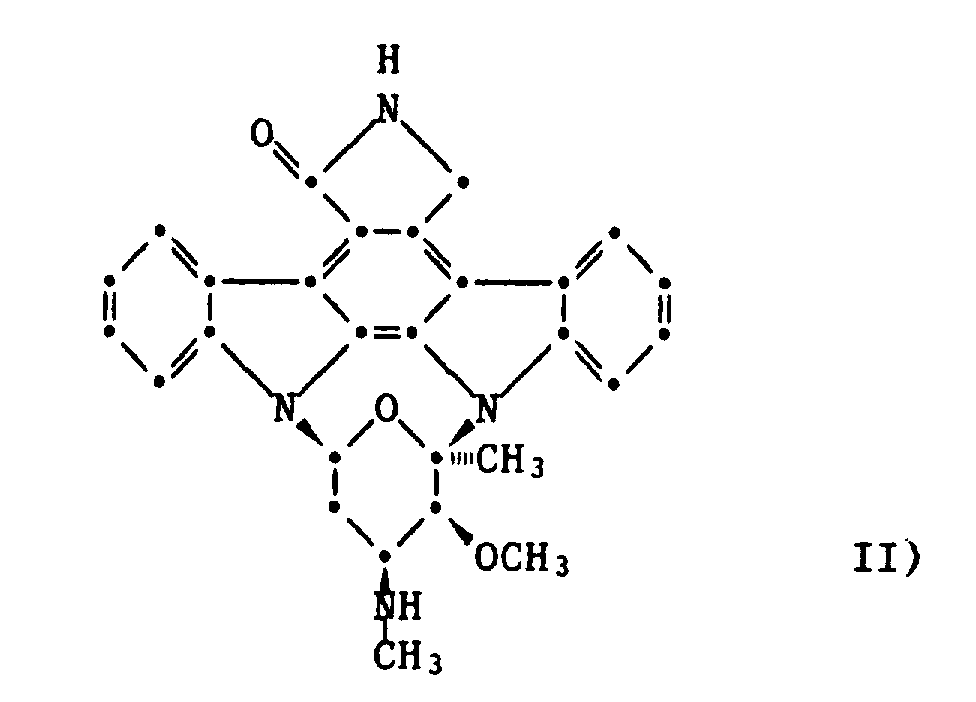 Staurosporine the formula [storage]-NH-CH ₃ (II) (for the meaning of the rest of [storage] see above) as the basic material of the novel compounds was already in 1977, from the cultures of Streptomyces staurosporeus AWAYA, and TAKAHASHI

0.035 ml (0.3 mmol) of benzoyl chloride is added at room temperature to a solution of 116.5 mg (0.25 mmol) of staurosporine and 0.065 ml (0.38 mmol) of N,N-diisopropylethylamine in 2 ml of chloroform and the whole is stirred for 10 minutes. The reaction mixture is diluted with chloroform, washed with sodium bicarbonate solution, dried over magnesium sulphate and concentrated by evaporation. The crude product is chromatographed on silica gel (eluant:methylene chloride/ethanol 30:1); m.p. 235

N-benzoyl staurosporine is a benzoyl derivative of the naturally occurring alkaloid staurosporine. It is chiral compound ([a]D=+148.0+-2.0°) with the formula C35H30R1O4 (molecular weight 570.65). It is a pale yellow amorphous powder which remains unchanged up to 220°C. The compound is very lipophilic (log P>5.48) and almost insoluble in water (0.068 mg/1) but dissolves readily in DMSO.

Staurosporine (antibiotic AM-2282 or STS) is a natural product originally isolated in 1977 from the bacterium Streptomyces staurosporeus. It was the first of over 50 alkaloids to be isolated with this type of bis-indole chemical structure. The chemical structure of staurosporine was elucidated by X-ray analysis of a single crystal and the absolute stereochemical configuration by the same method in 1994.

Staurosporine was discovered to have biological activities ranging from anti-fungal to anti-hypertensive. The interest in these activities resulted in a large investigative effort in chemistry and biology and the discovery of the potential for anti-cancer treatment

The biosynthesis of staurosporine starts with the amino acid L-tryptophan in its zwitterionic form. Tryptophan is converted to an imineby enzyme StaO which is an L-amino acid oxidase (that may be FAD dependent). The imine is acted upon by StaD to form an uncharacterized intermediate proposed to be the dimerization product between 2 imine molecules. Chromopyrrolic acid is the molecule formed from this intermediate after the loss of VioE (used in the biosynthesis of violacein – a natural product formed from a branch point in this pathway that also diverges to form rebeccamycin. An aryl aryl coupling thought to be catalyzed by a cytochrome P450enzyme to form an aromatic ring system occurs

This is followed by a nucleophilic attack between the indole nitrogens resulting in cyclization and then decarboxylation assisted by StaC exclusively forming staurosporine aglycone or K252c. Glucose is transformed to NTP-L-ristoamine by StaA/B/E/J/I/K which is then added on to the staurosporine aglycone at 1 indole N by StaG. The StaN enzyme reorients the sugar by attaching it to the 2nd indole nitrogen into an unfavored conformation to form intermediated O-demethyl-N-demethyl-staurosporine. Lastly, O-methylation of the 4’amine by StaMA and N-methylation of the 3′-hydroxy by StaMB leads to the formation of staurosporine