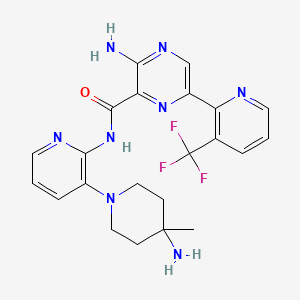 Uveal melanoma (UM) is the most common cancer of the eye in adults (Singh AD. et al., Ophthalmology. 201 1 ; 1 18: 1881-5). Most UM patients develop metastases for which no curative treatment has been identified so far. The majority of UM tumors have mutations in the genes GNAQ (guanine nucleotide-binding protein G(q) subunit alpha) and GNA11 (guanine nucleotide-binding protein G(q) subunit 1 1 ), which encode for small GTPases (Harbour JW. Pigment Cell Melanoma Res. 2012;25: 171-81). Both of these mutations lead to activation of the protein kinase C (PKC) pathway. The up-regulation of PKC pathway has downstream effects which leads to constitutive activation of the mitogen-activated protein kinase (MAPK) signaling pathway that has been implicated in causing uncontrolled cell growth in a number of proliferative diseases.

The protein p53 is a transcription factor that controls the expression of a multitude of target genes involved in DNA damage repair, apoptosis and cell cycle arrest, which are all important phenomena counteracting the malignant growth of tumors. The TP53 gene is one of the most frequently mutated genes in human cancers, with approximately half of all cancers having inactivated p53. Furthermore, in cancers with a non-mutated TP53 gene, typically the p53 is functionally inactivated at the protein level. One of the mechanisms of p53 inactivation is through its interaction with human homolog of MDM2 (Mouse double minute 2) protein. MDM2 protein functions both as an E3 ubiquitin ligase, that leads to proteasomal degradation of p53, and an inhibitor of p53 transcriptional activation. Therefore, MDM2 is an important negative regulator of the p53 tumor suppressor. MDM2 inhibitors can prevent interaction between MDM2 and p53 and thus allow the p53 protein to exert its effector functions. Whilst TP53 mutations are not common in UM, there are reports suggesting the p53 pathway is inactivated by either high expression of MDM2 protein or downregulation of the PERP protein in UM patients.

A combination of an MDM2 inhibitor (Nutlin-3) has been shown to act synergistically with reactivation of p53 and induction of tumor cell apoptosis (RITA) and Topotecan to cause growth inhibition in UM cell lines (De Lange J. et al., Oncogene. 2012;31 :1 105-16). However, Nutlin-3 and Topotecan delayed in vivo tumor growth only in a limited manner.