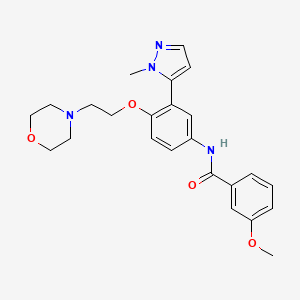 A 5-HT2A inverse agonist potentially for the reduction of the risk of arterial thrombosis.

Arterial thrombosis is the formation of a blood clot or thrombus inside an artery or arteriole that restricts or blocks the flow of blood and, depending upon location, can result in acute coronary syndrome or stroke. The formation of a thrombus is usually initiated by blood vessel injury, which triggers platelet aggregation and adhesion of platelets to the vessel wall. Treatments aimed at inhibiting platelet aggregation have demonstrated clear clinical benefits in the setting of acute coronary syndrome and stroke. Current antiplatelet therapies include aspirin, which irreversibly inhibits cyclooxygenase (COXa

) and results in reduced thromboxane production, clopidogrel and prasugrel, which inhibit platelet adenosine diphosphate (ADP) P2Y12 receptors, and platelet glycoprotein IIb/IIIa receptor antagonists. Another class of antiplatelet drugs, protease-activated thrombin receptor (PAR-1) antagonists, are also being evaluated in the clinic for the treatment of acute coronary syndrome. The most advanced candidate in this class, N-[(1R,3aR,4aR,6R,8aR,9S,9aS)-9-{2-[5-(3-fluorophenyl)pyridin-2-yl]vinyl}-1-methyl-3-oxoperhydro-naphtho[2,3-c]furan-6-yl]-carbamic acid ethyl ester (SCH-530348), is currently in phase 3 trials for the prevention of arterial thrombosis.

The 5-HT2A receptor is one of 15 different serotonin receptor subtypes.
In the cardiovascular system, modulation of 5-HT2A receptors on vascular smooth muscle cells and platelets is thought to play an important role in the regulation of cardiovascular function. Platelets are activated by a variety of agonists such as ADP, thrombin, thromboxane, serotonin, epinephrine, and collagen. Upon platelet activation at the site of blood vessel injury, a number of factors including serotonin (5-HT) are released. Although by itself serotonin is a weak activator of platelet aggregation, in vitro it can amplify aggregation induced by other agonists as mentioned above. Therefore, serotonin released from activated platelets may induce further platelet aggregation and enhance thrombosis.
The 5-HT2A receptor antagonist ketanserin  was shown in clinical studies to reduce early restenosis(7) and decrease myocardial ischemia during coronary balloon angioplasty.(8)However, in another study, ketanserin did not significantly improve clinical outcomes, and the rate of adverse events was higher than that observed in the control group.(9) Some of the adverse events reported in the latter study could be specific to ketanserin and resulted from its lack of 5-HT2A receptor selectivity. Other 5-HT2A antagonists with improved selectivity profiles have shown promise in clinical studies. For example, sarpogrelate  was shown to inhibit restenosis following coronary stenting.

Because the 5-HT2A receptor is expressed both in peripheral tissues and in the central nervous system (CNS), compounds with limited CNS partitioning would be preferred to maximize cardiovascular and blood platelet pharmacological activity while minimizing CNS effects. In addition, because 5-HT2A receptor inverse agonists are thought to reduce thrombus formation via inhibition of serotonin-mediated amplification of platelet aggregation without inhibiting agonist driven aggregation per se, it is possible that this class of inhibitors will have an improved bleeding risk side effect profile compared to what has been observed with other classes of antithrombotic drugs.

Serotonin, which is stored in platelets and is released during thrombosis, activates platelets via the 5-HT2A receptor. 5-HT2A receptor inverse agonists thus represent a potential new class of antithrombotic agents. Our medicinal program began with known compounds that displayed binding affinity for the recombinant 5-HT2A receptor, but which had poor activity when tested in human plasma platelet inhibition assays. We herein describe a series of phenyl pyrazole inverse agonists optimized for selectivity, aqueous solubility, antiplatelet activity, low hERG activity, and good pharmacokinetic properties, resulting in the discovery of 10k (APD791). 10k inhibited serotonin-amplified human platelet aggregation with an IC50 = 8.7 nM and had negligible binding affinity for the closely related 5-HT2B and 5-HT2C receptors. 10k was orally bioavailable in rats, dogs, and monkeys and had an acceptable safety profile. As a result, 10k was selected further evaluation and advanced into clinical development as a potential treatment for arterial

Discovery and Structure−Activity Relationship of 3-Methoxy-N-(3-(1-methyl-1H-pyrazol-5-yl)-4-(2-morpholinoethoxy)phenyl)benzamide (APD791): A Highly Selective 5-Hydroxytryptamine2A Receptor Inverse Agonist for the Treatment of Arterial Thrombosis

Oral administration of APD791 to dogs resulted in acute (1-h) and subchronic (10-day) inhibition of 5-HT-mediated amplification of collagen-stimulated platelet aggregation in whole blood. Two active metabolites, APD791-M1 and APD791-M2, were generated upon incubation of APD791 with human liver microsomes and were also indentified in dogs after oral administration of APD791. The affinity and selectivity profiles of both metabolites were similar to APD791. These results demonstrate that APD791 is an orally available, high-affinity 5-HT(2A) receptor antagonist with potent activity on platelets and vascular smooth muscle.(http://www.ncbi.nlm.nih.gov/pubmed/19628629).