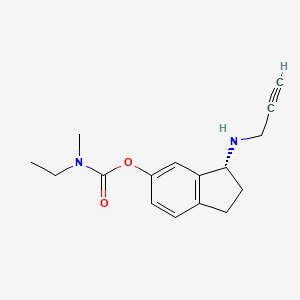 In 2010, ladostigil tartrate was licensed by Technion Research & Development Foundation and Yissum to Avraham for the treatment of Alzheimer’s disease and other neurogenerative diseases.

Ladostigil (TV-3,326) is a novel neuroprotective agent being investigated for the treatment of neurodegenerative disorders likeAlzheimer’s disease, Lewy body disease, and Parkinson’s disease.[1] It acts as a reversible acetylcholinesterase andbutyrylcholinesterase inhibitor, and an irreversible monoamine oxidase B inhibitor, and combines the mechanisms of action of older drugs like rivastigmine and rasagiline into a single molecule.[2][3] In addition to its neuroprotective properties, ladostigil enhances the expression of neurotrophic factors like GDNF and BDNF, and may be capable of reversing some of the damage seen in neurodegenerative diseases via the induction of neurogenesis.[4] Ladostigil also has antidepressant effects, and may be useful for treating comorbid depression and anxiety often seen in such diseases as well.[5][6]

Ladostigil [(N-propargyl-(3R) aminoindan-5yl)-ethyl methyl carbamate] is a dual acetylcholine-butyrylcholineesterase and brain selective monoamine oxidase (MAO)-A and -B inhibitor in vivo (with little or no MAO inhibitory effect in the liver and small intestine), intended for the treatment of dementia co-morbid with extrapyramidal disorders and depression (presently in a Phase IIb clinical study). This suggests that the drug should not cause a significant potentiation of the cardiovascular response to tyramine, thereby making it a potentially safer antidepressant than other irreversible MAO-A inhibitors. Ladostigil was shown to antagonize scopolamine-induced impairment in spatial memory, indicating that it can cause significant increases in rat brain cholinergic activity. Furthermore, ladostigil prevented gliosis and oxidative-nitrative stress and reduced the deficits in episodic and spatial memory induced by intracerebroventricular injection of streptozotocin in rats. Ladostigil was demonstrated to possess potent anti-apoptotic and neuroprotective activities in vitro and in various neurodegenerative rat models, (e.g. hippocampal damage induced by global ischemia in gerbils and cerebral oedema induced in mice by closed head injury). These neuroprotective activities involve regulation of amyloid precursor protein processing; activation of protein kinase C and mitogen-activated protein kinase signaling pathways; inhibition of neuronal death markers; prevention of the fall in mitochondrial membrane potential and upregulation of neurotrophic factors and antioxidative activity. Recent findings demonstrated that the major metabolite of ladostigil, hydroxy-1-(R)-aminoindan has also a neuroprotective activity and thus, may contribute to the overt activity of its parent compound. This review will discuss the scientific evidence for the therapeutic potential use of ladostigil in Alzheimer’s and Lewy Body diseases and the molecular signaling pathways that are considered to be involved in the biological activities of the drug