Loxoprofen (INN) is a non-steroidal anti-inflammatory drug in the propionic acid derivatives group, which also includes ibuprofen and naproxen among others. It is marketed in Brazil, Mexico and Japan by Sankyo as its sodium salt, loxoprofen sodium, under the trade name Loxonin, Argentina as Oxeno and in India as Loxomac. It is available in these countries for oral administration, and a transdermal preparation was approved for sale in Japan on January 2006.[1] 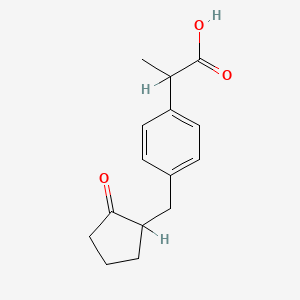 Loxoprofen is a prodrug. It is quickly converted to its active trans-alcohol metabolite following oral administration, and reaches its peak plasma concentration within 30 to 50 minutes.

As most NSAIDs, loxoprofen is a non-selective cyclooxygenase inhibitor, and works by reducing the synthesis of prostaglandins from arachidonic acid.

Loxoprofen should not be administered at the same time as second-generation quinolone antibiotics such as ciprofloxacin and norfloxacin, as it increases their inhibition of GABA and this may cause seizures.[2] It may also increase the plasma concentration of warfarin, methotrexate, sulfonylurea derivatives and lithium salts, so care should be taken when loxoprofen is administered to patients taking any of these drugs.[2]

Ethyl 2-oxocyclopentanecarboxylate (I) reacts with ethyl 2-(4-chloromethylphenyl)propionate (II) in the presence of KOH in hot DMF to afford ethyl 2-[4-(1-ethoxycarbonyl-2-oxocyclopentan-1-ylmethyl)phenyl]propionate (III), which is then hydrolyzed and decarboxylated by treatment with 47% HBr in refluxing dioxane.

Method for the preparation of loxoprofen (2S,1’R,2’S) trans-alcohol. Appears to be the first filing from the assignee. Sankyo (now Daiichi Sankyo) has developed and launched oral loxoprofen (Loxonin), an NSAID, is indicated for the symptom relief of inflammation and pain associated with eg rheumatoid arthritis, osteoarthritis and low back pain. Regional and national filings based on the product patent, WO03059880 start expiring from Jan 2023.