Nigella Sativa Kills 89% of Lung Cancer Cells in Vitro: Researchers have just shown that nigella sativa (also known as black seed or black cumin) seed oil killsup to 89% of human lung cancer cells (A-549) after just 24 hours, while a non-oil extract from the seeds killed up to 77% of the cancer cells.

The extracts were prepared from seeds obtained at a local market. Nigella sativa is a powerful medicinal herb which has been used for thousands of years in traditional Chinese, Ayurvedic, Unani and Arabic medicine. It is best known for its potent anti-inflammatory and antioxidant properties, and has been used to suppress coughs, treat kidney stones, diarrhea and stomach pain. But modern science has now also uncovered nigella’s powerful anti-diabetes and anti-cancer effects.

This super herb has already shown potent activity against cancer of the breast, prostate, kidney, pancreas, liver, colon and cervix in previous lab studies, and this new study has shown new activity against lung cancer. Good health and cancer prevention should always start with a well-balanced diet focused on organic vegetables, fruit and whole foods (consuming at least half in the raw state). But nigella sativa may offer sizeable benefits for those wanting an extra measure of protection. Nigella sativa is an annual flowering plant, native to south and southwest Asia. It grows to 20–30 cm (7.9–11.8 in) tall, with finely divided, linear (but not thread-like) leaves. The flowers are delicate, and usually coloured pale blue and white, with five to ten petals. The fruit is a large and inflated capsule composed of three to seven united follicles, each containing numerous seeds. The seed is used as a spice.

The scientific name is a derivative of Latin niger (black).[2]

The seeds are frequently referred to as black cumin (as in Assamese: kaljeera or kolajeera or Bengali kalo jeeray), But black cumin (kala Jeera)[clarification needed] is different than Nigella sativa (Kali Jeeri).[citation needed] In south Indian language Kannada it is called [ಕೃಷ್ಣ ಜೀರಿಗೆ] “Krishna Jeerige”, but this is also used for a different spice, Bunium persicum.

It is used as part of the spice mixture paanch phoran or panch phoron (meaning a mixture of five spices) and by itself in a great many recipes in Bengali cookery and most recognizably in naan bread.[5]

The Turkish name çörek otu literally means “bun’s herb” from its use in flavouring the çörek buns. Such braided-dough buns are widespread in the cuisines of Turkey and its neighbours (see Tsoureki τσουρέκι). In Bosnian, the Turkish name for Nigella sativa is respelled as čurekot. The seed is used in Bosnia, and particularly its capital Sarajevo, to flavour pastries (Bosnian: somun) often baked on Muslim religious holidays. 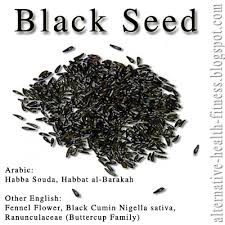 Nigella sativa has a pungent bitter taste and smell. It is used primarily in confectionery and liquors. Peshawari naan is, as a rule, topped with kalonji seeds. Nigella is also used in Armenian string cheese, a braided string cheese called Majdouleh or Majdouli in the Middle East.

According to Zohary and Hopf, archaeological evidence about the earliest cultivation of N. sativa “is still scanty”, but they report supposed N. sativa seeds have been found in several sites from ancient Egypt, including Tutankhamun‘s tomb.[6] Although its exact role in Egyptian culture is unknown, it is known that items entombed with a pharaoh were carefully selected to assist him in the afterlife.

The earliest written reference to N. sativa is thought to be in the book of Isaiah in the Old Testament, where the reaping of nigella and wheat is contrasted (Isaiah 28: 25, 27). Easton’s Bible dictionary states the Hebrew word ketsah refers to N. sativa without doubt (although not all translations are in agreement). According to Zohary and Hopf, N. sativawas another traditional condiment of the Old World during classical times; and its black seeds were extensively used to flavour food.[6]

Found in Hittite flask in Turkey from 2nd millennium BCE.[7]

History of medicineIn the Unani Tibb system of medicine, black cumin (Bunium bulbocastanum) is regarded as a valuable remedy for a number of diseases. Sayings of the Islamic prophet Muhammadunderline the significance of black cumin. According to a hadith narrated by Abu Hurairah, he says, “I heard Allah’s Apostle saying, ‘There is healing in black seed (haba sowda) for all diseases except death.'” [8] [9]

The black cumin (Bunium bulbocastanum) seeds have been traditionally used in the Middle East and Southeast Asian countries for a variety of ailments. Nigella seeds are sold as black cumin in small bundles to be rubbed until warm, when they emit an aroma similar to black cumin which opens clogged sinuses in the way that do eucalyptus or Vicks.

Nestlé has purportedly filed a patent application covering use of Nigella sativa as a food allergy treatment.[10] Yet the firm denies the claim of patenting the plant, stating that the patent would only cover “the specific way that thymoquinone – a compound that can be extracted from the seed of the fennel flower – interacts with opioid receptors in the body and helps to reduce allergic reactions to food”.[11]

Thymoquinone, found in the seed oil extract of N. sativa, has been shown to have anti-neoplastic effects in rats and mice and in cultured human cells from several types of cancer, including pancreatic ductal adenocarcinoma.[12] It has protective antioxidant and anti-inflammatory effects, and promotes apoptosis (cell death) of the cancer cells.[12]

Original black cumin (Bunium bulbocastanum) is rarely available, so N. sativa is widely used instead; in India, Carum carvi is the substitute. Cumins are from the Apiaceae (Umbelliferae) family, but N. sativa is from Ranunculaceae family. Black cumin (not N. sativa) seeds come as paired or separate carpels, and are 3–4 mm long. They have a striped pattern of nine ridges and oil canals, and are fragrant (Ayurveda says, “Kaala jaaji sugandhaa cha” (black cumin seed is fragrant itself)), blackish in colour, boat-shaped, and tapering at each extremity, with tiny stalks attached; it has been used for medicinal purposes for centuries, both as a herb and pressed into oil, in Asia, the Middle East, and Africa.

Nigella sativa oil contains an abundance of conjugated linoleic (18:2) acid, thymoquinone, nigellone (dithymoquinone),[13] melanthin, nigilline,damascenine, and tannins. Melanthin is toxic in large doses and nigelline is paralytic, so this spice must be used in moderation. 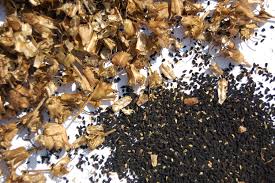