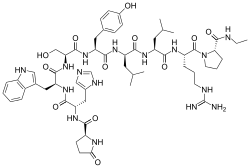 Jitsubo , a subsidiary of  Sosei , was investigating JIT-1007 , presumed to be a biosimilar version of an undisclosed peptide therapeutic, generated using its proprietary Molecular Hiving, for the treatment of an unidentified indication, however no development has been reported for some time, this program is assumed to be discontinued.

Leuprorelin, also known as leuprolide, is a manufactured version of a hormone used to treat prostate cancer, breast cancer, endometriosis, uterine fibroids, and early puberty.[1][2] It is given by injection into a muscle or under the skin.[1]

Common side effects include hot flashes, unstable mood, trouble sleeping, headaches, and pain at the site of injection.[1] Other side effects may include high blood sugar, allergic reactions, and problems with the pituitary gland.[1] Use during pregnancy may harm the baby.[1] Leuprorelin is in the gonadotropin-releasing hormone (GnRH) analogue family of medications.[1] It works by decreasing gonadotropin and therefore decreasing testosterone and estradiol.[1]

Leuprorelin was patented in 1973 and approved for medical use in the United States in 1985.[1][3] It is on the World Health Organization’s List of Essential Medicines, the most effective and safe medicines needed in a health system.[4] In the United Kingdom a monthly dose costs the NHS about GB£75.24.[5] In the United States the equivalent dose has a wholesale cost of US$1,011.93.[6] It is sold under the brand name Lupron among others.[1]

Leuprorelin may be used in the treatment of hormone-responsive cancers such as prostate cancer and breast cancer. It may also be used for estrogen-dependent conditions such as endometriosis[7] or uterine fibroids.

It may be used for precocious puberty in both males and females,[8] and to prevent premature ovulation in cycles of controlled ovarian stimulation for in vitro fertilization (IVF).

It may be used to reduce the risk of premature ovarian failure in women receiving cyclophosphamide for chemotherapy.[9]

Along with triptorelin and goserelin, it is has been used to delay puberty in transgender youth until they are old enough to begin hormone replacement therapy.[10] Researchers have recommended puberty blockers after age 12, when the person has developed to Tanner stages 2-3, and then cross-sex hormones treatment at age 16. This use of the drug is off-label, however, not having been approved by the Food and Drug Administration and without data on long-term effects of this use.[11]

They are also sometimes used as alternatives to antiandrogens like spironolactone and cyproterone acetate for suppressing testosterone production in transgender women.[citation needed]

It is considered a possible treatment for paraphilias.[12] Leuprorelin has been tested as a treatment for reducing sexual urges in pedophiles and other cases of paraphilia.[13][14]

Leuprorelin is a gonadotropin-releasing hormone (GnRH) analogue acting as an agonist at pituitary GnRH receptors. Agonism of GnRH receptors initially results in the stimulation of luteinizing hormone (LH) and follicle-stimulating hormone (FSH) secretion by the anterior pituitary ultimately leading to increased serum estradiol and testosterone levels via the normal physiology of the hypothalamic–pituitary–gonadal axis (HPG axis); however, because propagation of the HPG axis is incumbent upon pulsatile hypothalamic GnRH secretion, pituitary GnRH receptors become desensitised after several weeks of continuous leuprorelin therapy. This protracted downregulation of GnRH receptor activity is the targeted objective of leuprorelin therapy and ultimately results in decreased LH and FSH secretion, leading to hypogonadism and thus a dramatic reduction in estradiol and testosterone levels regardless of sex.[17][18]

In the treatment of prostate cancer, the initial increase in testosterone levels associated with the initiation of leuprorelin therapy is counterproductive to treatment goals. This effect is avoided with concurrent utilisation of 5α-reductase inhibitors, such as finasteride, which function to block the downstream effects of testosterone.

Leuprorelin was discovered and first patented in 1973 and was introduced for medical use in 1985.[19][20] It was initially marketed only for daily injection, but a depot injectionformulation was introduced in 1989.[20]

Available formsLupron injection was first approved by the FDA for treatment of advanced prostate cancer on April 9, 1985.

Leuprorelin is available in the following forms, among others:[25][26][27]

A 2005 paper in the controversial and non-peer reviewed journal Medical Hypotheses suggested leuprorelin as a possible treatment for autism,[28] the hypothetical method of action being the now defunct hypothesis that autism is caused by mercury, with the additional unfounded assumption that mercury binds irreversibly to testosterone and therefore leuprorelin can help cure autism by lowering the testosterone levels and thereby mercury levels.[29] However, there is no scientifically valid or reliable research to show its effectiveness in treating autism.[30] This use has been termed the “Lupron protocol”[31] and Mark Geier, the proponent of the hypothesis, has frequently been barred from testifying in vaccine-autism related cases on the grounds of not being sufficiently expert in that particular issue[32][33][34] and has had his medical license revoked.[31] Medical experts have referred to Geier’s claims as “junk science”.[35]

Leuprorelin is frequently used in ferrets for the treatment of adrenal disease. Its use has been reported in a ferret with concurrent primary hyperaldosteronism,[36] and one with concurrent diabetes mellitus.[37]

As of 2006 leuprorelin was under investigation for possible use in the treatment of mild to moderate Alzheimer’s disease.[38]